The Daily Nexus
The Daily Stench
Despite Contradicting Claims, Student Really Just Watched Netflix All Summer
August 22, 2019 at 10:30 am by Kian Karamdashti 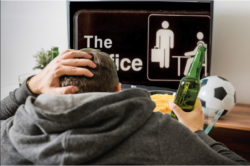 “Oh, this summer’s going to be an absolute movieeeeeeee! The time of our lives!”

That’s what local resident Michael Sendet claimed enthusiastically in June when asked about his summer plans of staying in Isla Vista.

“Power moves only. That’s the summer motto,” said Sendet. “I’m going to get tan, learn how to surf and knock out some units toward graduation. It’ll be such a productive summer.”

Two months later, despite the bold positivity, it seems Sendet has not lived up to the proclamations he made.

“He has no job and he’s not even taking classes,” said Sendet’s roommate, Peter Ductive. “All he does is smoke weed, rewatch ‘The Office’ and post Instagram stories on our beach balcony with the captions #BlessingsonBlessings and #MyLifeIsAMovieAndYouJustTivo’d.”

When confronted with criticism of his summer activities, Sendet was adamant that his summer has lived up to the billing.

“It’s called self-care, you insensitive dick,” said Sendet. “I’ve put in so much effort in school this year; it was important to take a mental health break. In this era of toxic masculinity, we males have got to come together and publicly recognize the strain we put ourselves through every day.”

Sendet eventually kicked us out of the house after we brought up his 35% class attendance rate and cumulative 2.1 GPA as a response.

Even his “best friend” Chad Brohanski hasn’t had any Sendet sightings this summer.

“Wait, Sendet’s been here all summer? What the fuck?”