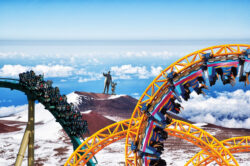 Following protests over the construction of the Thirty Meter Telescope on the slopes of Mauna Kea in Hawaii, Disney® Resorts has announced construction plans for a new Space Mountain™-themed roller coaster on the summit of the dormant volcano. Despite growing controversy surrounding the construction of the world’s largest observatory on the mountain, there has surprisingly been little resistance to the proposed theme park attraction.

Disney® executives have been adamant about the value to be gained from the construction of this high-octane attraction atop the sacred summit of the Hawaiian peak, citing the “extreme thrills” and “stacks of mone — [cough cough] … erm, I mean buckets of fun!” to come of the ride.

When asked about the specific location chosen for the construction of this attraction, those same executives assured “there’s no better place to build a space-themed attraction than as close to space as possible,” and that this attraction would “help humanity peer deeper than ever before into the vast, unknown reaches of [their pockets].” Executives were unable to be reached for further comment, as they had all returned to their usual schedules of commercializing every possible inch of the island into a Disney® property, sipping mai tais, and hunting people for sport.

“Everyone likes roller coasters,” one would-be protester told Nexustentialism, “unlike that nerd shit those scientists tried to pull with that lame telescope.”

While many native Hawaiians justly abhor the idea of a commercial attraction being constructed on land they consider sacred, developers at the site have assured them it’s nearly impossible to remember the slow death of the native culture of your homeland while accelerating at 3.7 G’s around an adrenaline-pumping, cosmos-inspired, indoor roller coaster track. Though many felt reassured by this statement, some islanders below the coaster’s minimum height requirement have remained skeptical.

“Could governments and corporations just respect the autonomy of indigeneous peoples for once?” one islander asked in what was likely the most overly optimistic expectation set for the U.S. government that week, given its track record. Though this question was most likely rhetorical, Nexustentialism feels the need to clarify that the answer to this question is: no, probably not.

With the big mouse upstairs closing in on much sought-after real estate atop the hallowed peak, the race to develop the once-pristine peak into a profit-maximizing machine has officially begun. And while the ethics of this whole debacle are fuzzy at best, at least this indigineous rights violation comes with a side of “The Happiest Place on Earth™”.

Max Myszkowski thinks the first CEO to develop commercial enterprises on Mauna Kea should be thrown directly into the volcano.

The polls that have been done show that the majority of Kanaka Maoli (Native Hawaiians) favor TMT. In 1880, King (David) Kalakaua said he wanted to establish an observatory in Hawaii. Max chooses to repeat the narrative of a vocal mob. After UCSB 1975, then UCLA grad 1977, I moved to Oahu. During my 30 years there, I took every Hawaiian language course available at the Univ of HI, Manoa. As a current resident of Waimea (Kamuela) on the Big Island, I have amused myself by going out to the protest site and trying to speak Hawaiian to the protestors.… Read more »