The Daily Nexus
Nexustentialism
It's satire, stupid.
Friend Somehow Just Has All the Internships?
August 13, 2019 at 4:20 pm by Sam Penn 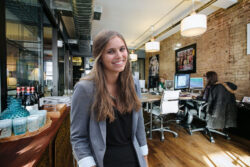 Breaking: It has recently dawned on incoming junior Marissa Torrez that close friend and housemate Alexandra Lee manages each year to somehow have all the internships.

Amidst many Facebook posts voicing her gratitude in working with “such an amazing team” and Insta stories of lunches in Miami, Washington D.C. and also somehow Burbank, it is becoming increasingly unclear as to which and how many internships Lee currently has.

“Every year she mentions at least five different internships she’s involved in. At this point I’ve lost count,” said Torrez, who seemed resentful. “I think she does like marketing? Or bioengineering? No, wait…”

Lee, who can be identified as the only person you know who consistently updates her LinkedIn, doesn’t seem frazzled by the breadth of work she has and in fact seems to thrive off of it.

“I just have a lot of questions,” continued Torrez. “Like, are they paid? How many does she actually have? How is she at a conference in D.C. and then also Austin in the same weekend?”

Torrez insists she’s happy for her friend but would feel better with a similar opportunity instead of scrolling through TikTok each and every day this summer.

“Did I apply for an internship? No, but I feel like if you’re going to have them all, you should let me have a chance to at least think about trying to get one,” said Torrez. “Oh, look at this video, this one’s super funny…”

Sam Penn works for his father.