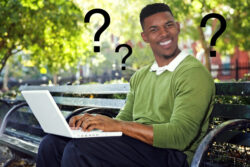 This just in: UCSB’s automated email-delivery service has recently broken a new record! It has been revealed that — for the first time — phishing scams now make up the majority of the notifications sent to students by this system. In the wake of this revelation, students and faculty alike have expressed great concern over the security of the university’s primary messaging system.

“Wait, so you’re telling me they’re not forgiving all my student loans?!” second-year student Gilly Bull said. “I gave them my social security number, bank account number and mother’s maiden name,” she added. “Do you think that’s bad?”

Administration officials have yet to release an official statement on the duplicitous nature of their notification system, though several have allegedly released follow-up emails warning of the dangers of phishing scams. The authenticity of these follow-up emails is currently also under suspicion, however, as most of them begin with: “CONGRATULATIONS! You’re the 10,000th student to receive this notification!!! Click the link below to receive your free prize!!!”

In an attempt to glean some more insight into the phishing process, Nexustentialism reached out to well-known phishing connoisseur and supposed Nigerian prince, Mahnay Pleesi, for his take on this situation.

“There’s only one way to put a stop to these fraudulent emails for good,” he said. “All you have to do is wire $500 in Bitcoin directly to the following account, and all your troubles will be gone.”

Nexustentialism would have sent the requested funds but was halted by the fact that we don’t make that much money in a year and because our editor in chief said “no.” If, however, you would like to see this issue resolved once and for all, simply send a cashier’s check for $1,000 in an unmarked envelope directly to the Daily Nexus office. Your contributions are greatly appreciated.

An explanation as to why the university’s cybersecurity is so often thwarted has yet to be found. Faculty members from the computer science department were contacted for further information but offered little insight.

“Not my problem,” one professor of computer science told Nexustentialism. “They don’t pay me nearly enough to clean up that mess.”