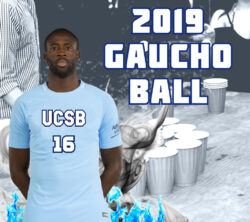 First things first: it’s Gaucho Ball, not “Rage Cage” — show some school pride for crying out loud. Second things second: UCSB has officially qualified as Division 1 in our sacred drinking ritual! As of this summer, UCSB is officially leading the world in competitive drinking. With an incoming class ready to fill the team roster with thousands of prospective red Solo stackers and thousands of seasoned, veteran players already enrolled, the new team is already set up for one hell of a season.

“This almost makes up for the fact that we don’t have a football team,” said third-year student Talia Gaiter. “Now we can drink before, during and after sporting events — we really are a world-class institution.”

Anyone who has played a round or two of this game can attest to the intense pressure that steadily rises as the stack of cups into which you must bounce your ping pong ball grows taller and taller. This growing tension in the game, coupled with the brilliant catharsis of the full beer awarded (most often punitively) to the person who gets the last cup, provides the perfect story arc to each playthrough of the game.

As a show of respect to our forefathers, the inventors of this fast-paced drinking game, we as Gauchos ought to honor their contributions to the art of turning casual drinking into a frenzied panic over who’s getting the bitch cup. Masters of their craft, the alumni who pioneered this field of competitive drinking have long since put away their ping pong balls and red Solo cups, but thankfully we, the current students of UCSB, have dutifully carried on their legacy, elevating this sport to previously unimaginable heights.

Much in the same way oral histories and traditions have been passed down through generations for millennia, perhaps Gaucho Ball will one day cement its place in the collective consciousness as a fundamental part of the human condition. If not, then it has at least certainly cemented itself as the easiest way to get drunk off free alcohol at a stranger’s party without getting caught.

Henri Bemis made the team and will be redshirting this season.

This is mind-bogglingly unfunny.