The Daily Nexus
Sign of the Times
The Border Wall Argument Stands on a Shaky Foundation
May 2, 2019 at 4:00 am by Kian Karamdashti

It’s 2019 and whether you support, despise or remain indifferent to him, everybody is pretty much tired of talking about Donald Trump. Every week seems to bring in a barrage of new scandals, headlines and crises consistently putting the country and its media into bedlam. It takes devoted political interest to not be numbed by the constant chaotic updates coming from the oval office.

Despite many citizens’ attempts to block out anything Trump-related, the Trump train continues to chug on, affecting real lives everyday. It is in this context that Trump’s continued insistence on combating the supposed dangers of illegal immigration represent such a dangerous precedent for the American people’s attitudes towards the immigrant population — more specifically, the immigrants illegally crossing the border.

While this declaration of division among the citizens of two neighboring countries is certainly troublesome, Trump doubled down on his aggressive stance toward Mexico by centering a key part of his platform on the notion that “Mexico must pay for the wall.” 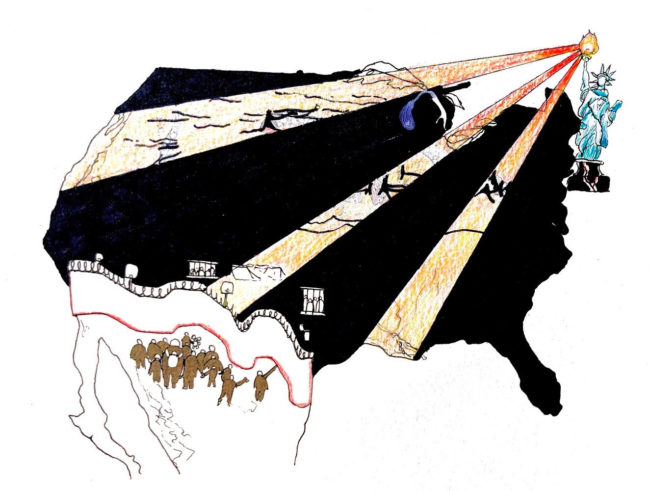 This obviously hasn’t happened, however. Since his election, Trump has continued to push this agenda against the southern border despite the wishes of the American public. According to a Gallup poll conducted in February 2019, 60% of Americans reported being “totally opposed” to the construction of a border wall built on the Mexican-American border. That’s three-fifths of Americans who are TOTALLY AGAINST the construction of the wall. Nevertheless, a 35-day government shutdown, the longest in American history, was forced when Congress did not grant funding for our president’s passion project. For 35 days, 800,000 federal employees went without pay, and federally funded programs, such as the TSA, were left short-staffed —  all for a cause the majority of the public doesn’t seem to support.

Considering the president’s relentless pursuit of a project he hopes “is named the Trump Wall,” one must inquire about the reasoning behind this “improved” fence. Trump has described the scene at the border as a “growing humanitarian and security crisis at our southern border,” involving “thousands of illegal immigrants.” However, while there is certainly a humanitarian crisis forcing many illegal immigrants to attempt to enter the United States of America, there has actually been an 81% decline in border apprehensions since 1999. This means that, historically speaking, the volume of immigrants crossing the border is certainly not the issue. Crime-wise, according to CNN, among Texas residents, the rate per arrest among 100,000 residents in each subpopulation was 899 for undocumented immigrants, while native-born citizens experienced a rate of 1,797 arrests per 100,000 Americans  — a number that is approximately double the crime rate present for undocumented immigrants. While this may sound surprising, this makes sense from a logical standpoint: illegal immigrants enter this country to seek out a better life. In order to do this, they must remain undetected by law enforcement. This begs the question of why an illegal immigrant would commit a crime, especially a violent one, and risk being sent back to a country they risked so much to escape. It simply makes no sense.

Encouraging military violence against undocumented immigrants is not only out of touch, but is insensitive to a population often looking to flee drugs, violence and rape.

One of the biggest arguments pushing for stricter enforcement of the border is the notion that illegal immigrants are prying jobs away from American citizens. According to the Pew Research Center, undocumented immigrants make up about 5% of the U.S. workforce. Despite this low number, these undocumented immigrants make up a large concentration of many industries: they make up more than half of our nation’s agricultural employees and a quarter of the nation’s domestic laborers. While these numbers may seem alarmingly large, these are sectors that require even more growth over the next few years. According to the Bureau of Labor Statistics, which produces estimates of growing occupations in the United States, domestic labor jobs such as maids and cleaners will require about 112,000 more workers by 2024. According to the Cornell Farmworker Program, many farms turned to undocumented workers in past decades due to a lack of U.S. citizens willing to do the job because it is consistently listed as one of the most dangerous occupations every year. In the face of these numbers, the argument seems to shift from “undocumented immigrants are stealing jobs” to the argument that they’re indispensable to the American workforce and will continue to be.

But hey, let’s create a hypothetical scenario: say every single person who crossed the border illegally was a violent criminal.Would a wall even be effective? Not necessarily. According to Roll Call, in 2017, United States Border Patrol reported the apprehension of 310,000 undocumented immigrants crossing the border. However, in the same year, more than 700,000 undocumented immigrants came through via a legal visa and then overstayed it once it expired. Earlier this year, President Trump claimed the border wall would cost about $12 billion. That’s $12 billion for a wall that would fail to address a significant portion of the population that Trump intends to keep out. From a financial perspective, this is highly questionable. It would be a substantial waste of money, regardless of whether the Mexican government or U.S. taxpayers provide funding.

A significant amount of evidence calls into question the rationale behind the Trump administration’s aggressive stance on immigration. Yet, just last week, Trump claimed he was “going to call up more military” and “that we can’t act like a military would act. If they got a little rough, everybody would go crazy.” Such diction encouraging military violence against undocumented immigrants is not only out of touch, but is insensitive to a population often looking to flee drugs, violence, rape, etc. It is insensitive to a population that often is filled with unarmed women and children. The rhetoric used by our President dehumanizes people who are no less entitled to a life of safety and security than the rest of the white settlers whose descendants live here today in the United States. Those in charge of controlling the border have clearly adopted Trump’s mindset towards these immigrants and asylum seekers. Three published reports from the DHS Office of Inspector General found that ICE detention facilities held “poor treatment and spotty facilities.” On top of that, as of January 2019, 22 people have died in ICE custody within the last two years. 22 people died while in the custody of the country they were hoping to escape to. A treacherous, dangerous journey was made completely futile.

The Trump administration has inhumanely responded to a group of people looking for a better life, a group statistically proven to not represent any more danger to the American people than its own citizens.

Sadly, this problem of harsh deportations has been perpetuated by multiple administrations, especially the Obama administration, which broke national records of deportations. However, during Obama’s presidency, the United States experienced approximately double the amount of individuals attempting to cross the border than during Trump’s presidency thus far. According to Vox, in September 2018, the United States estimated the apprehension of 31,000 individuals at the border, the most experienced under the Trump administration so far. In comparison, nearly 70,000 individuals were apprehended at the border in May 2014, during Obama’s tenure.

While I do not agree with the Obama administration’s response to this large influx of immigrants, there was at least a circumstantial argument to justify the mass deportations and attempted separations of family at the border. Trump seems to be doing it not because he needs to, but because he simply wants to.

There is no denying there is an issue at the border. Men, women and children are being forced out of their Central American countries and choosing to partake in a perilous journey in the hopes of escaping the dangers and problems of their homes. Yet, I would argue that a larger issue is being created in how the Trump administration has inhumanely responded to a group of people looking for a better life, a group statistically proven to not represent any more danger to the American people than its own citizens. They’re not stealing American jobs and an expensive, fancy wall is certainly not going to keep them out. History will not look back at the policies and actions of this administration kindly.

The Statue of Liberty famously states: “Give me your tired, your poor, Your huddled masses yearning to breathe free, The wretched refuse of your teeming shore. Send these, the homeless, tempest-tost to me, I lift my lamp beside the golden door!”

Kian Karamdashti wishes our elected leaders were held responsible for the words they relay to the public.