The Daily Nexus
On the Menu
Confessions of an Emotional Eater and How I’ve Coped
February 2, 2017 at 12:31 am by Collin McLeod 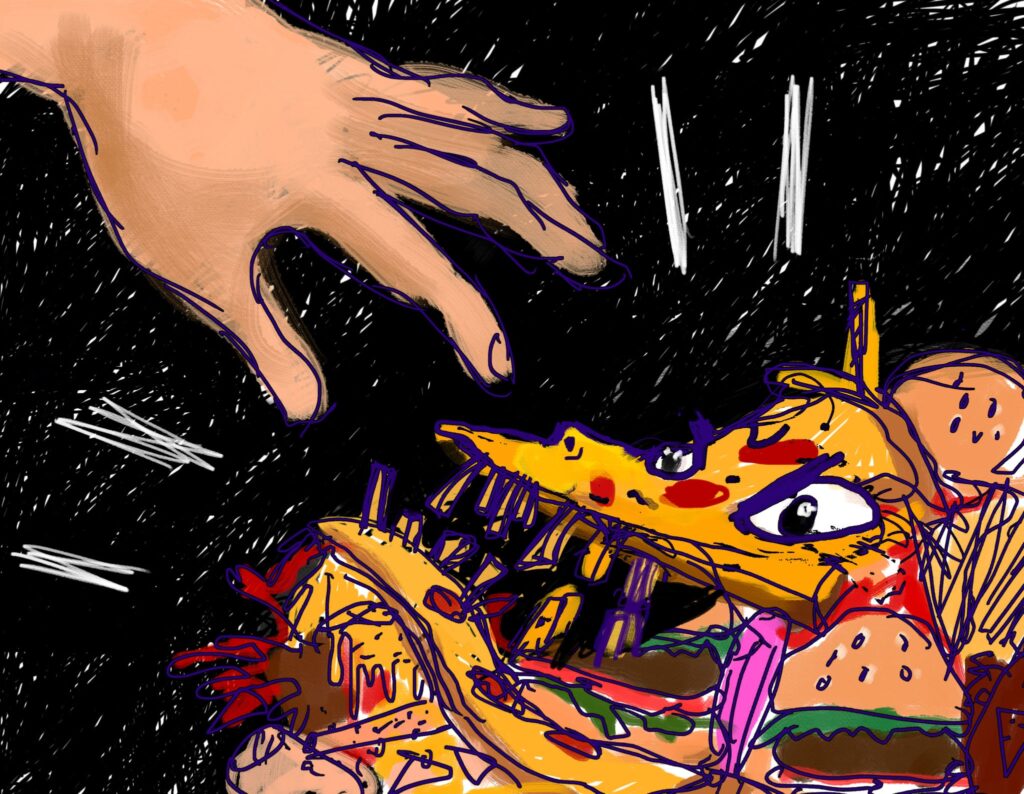 “This one time in high school, I was fat and didn’t have any friends.” I often utter this phrase in order to get a (sometimes uncomfortable) laugh out of people in awkward situations or to respond to a conversation I’m not particularly paying attention to, but I rarely think of what my life was like back when I was over 230 pounds. Thinking about it, my weight struggle is always the subject of my self-deprecating jokes and writing. I’ve pretty much moved on from this awkward and unhealthy time in my life, but there are still elements of it that I carry into my current life.

I am an emotional eater, and I am coming out. As a preface, no, I am not one of those people online who shares memes about how much they can eat. In fact, I often smile when I see people from back home who I know grew up skinny talking about their eating habits. Isn’t it funny that the same people who teased us for our weight our entire lives now pride themselves on being able to eat an entire pizza alone while binging Netflix? Call me when you hit up McDonald’s, Burger King, Del Taco and Taco Bell all in one night after a day of dealing with debilitating internal emotional trauma. One pizza is an appetizer.

The first time I remember using food to cope with my emotions was when I was a little kid. My family’s first dog, TJ, had to be put down because he was sick, and I was devastated. After I heard the news, my grandparents took my brother and me out for frozen yogurt, and, as I ate, I noticed I started to feel better about the situation. I wasn’t necessarily happy, but there was a numbness to being full. From that point forward, I figured that eating something could make the pain go away. I would crave candy bars, hamburgers, you name it; it was on my mind to cope. I was fortunate enough not to have a lot of trauma in my life as a young child, so my relationship with food was pretty much a healthy one. I loved to eat since I basically had a team of gourmet chefs for a family, but I never felt out of control with my eating until I got older. As the years went on, I faced bullying for my weight, my sexuality and my appearance, which fueled me to eat more, but nothing compared to what would come during my life as a teenager.

When I was 14, my mom died in a car accident that I witnessed firsthand. I remember it like it was yesterday, and it will forever haunt me as the most traumatic day of my life. Oddly enough, I didn’t eat for two days straight after the accident, but what came of the next three years would leave me bloated and hating my own body. Since this pain was something that could not be fixed immediately by frozen yogurt or a one-time binge session, I ate thousands of calories per day in search for that comforting feeling. My meal of choice was a Double Western Bacon Cheeseburger with sweet potato fries, a large raspberry iced tea, an eight-pack of Almond Joy and a box of Reese’s Pieces. This would be followed by a nap and then waking up three hours later to have dinner with my family. I was so sad about my appearance that I would eat more, fueling a vicious cycle of binge-eating and self-loathing until one day I had had enough.

I decided that I was going to foster the external strength so many people applauded me for and apply it to my internal being. I started eating less and exercising more, shedding every pound to be the slimmest and healthiest I had ever been. I thought I had defeated my emotional eating habit, but I sure was wrong. By the time I was at my slimmest, I got into a tumultuous relationship (to say the least), which consisted of daily fighting and long-distance emotional manipulation. I found myself getting back to my old habits. Every day, I found myself buying chips, ice cream, donuts and all things terrible for you in order to cope. By the time I was out of the relationship, I had gained 20 pounds of the almost 100 I had lost. Looking back, this might have been my body readjusting from exercising all the time and eating next to nothing, but it still left an impact on me that I carry around inside today.

I wish I could say that I am a fully recovered emotional eater. I experience so much joy in my life, and I am so grateful for every opportunity I have, but there are still days when I feel the need to eat away my feelings. The thing that I have learned from all of my experiences with this problem in my life so far is that I have control over what I put in my body. No one is forcing a third slice of pizza down my throat, a milkshake into my hand or a box of Oreos into my backpack. I’m aware that I am in control, but just like all things in life, I will not be cured overnight. I will struggle, and I am okay with that. Each day, I teach myself new techniques to moderate my stress, sadness and anxiety. Most days they work, but other days I could really go for a loaf of bread. The point is not to be a victim of circumstance, but rather harness what makes you vulnerable and experience it. It is okay not to be okay; sometimes it just tastes better with a side of dressing.