The Daily Nexus
Recipes
Seasoned Prevention: A Guide to Fighting the Flu with Herbs and Spices
January 26, 2017 at 12:23 am by Collin McLeod 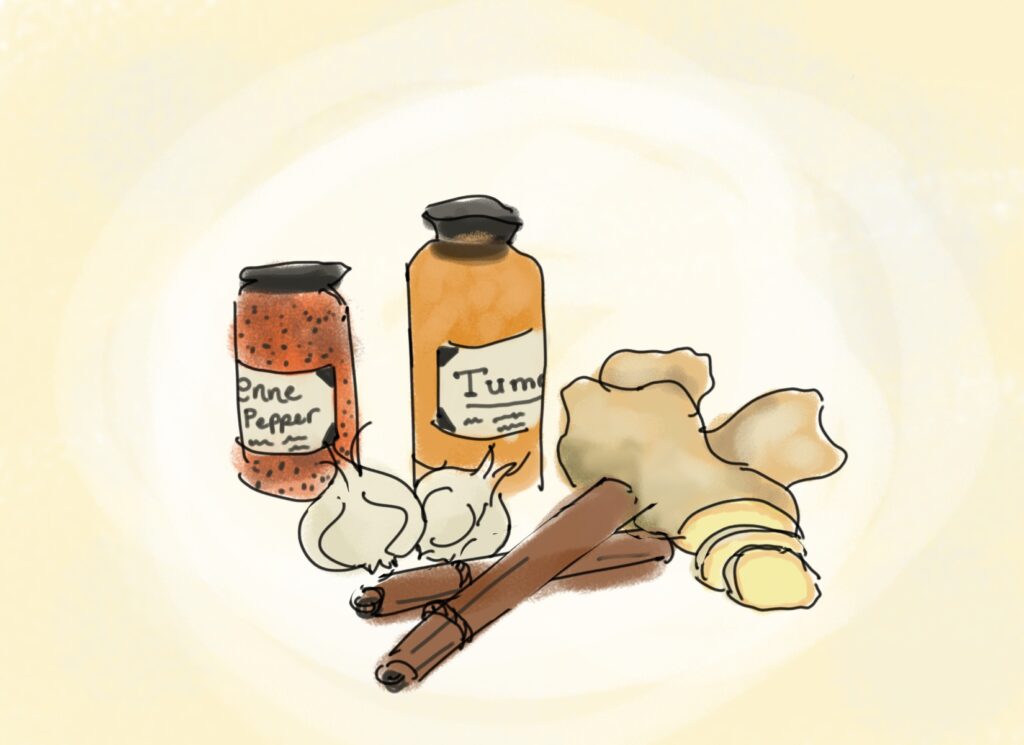 Another winter is upon us, which means it is time for cold and flu season! Aside from that being the most cliché way to start an article of this type, school doesn’t sit around and wait for any of us to get any better! So, here is a list of our top herbs and spices to save you from academically debilitating diseases this Winter Quarter!

Cayenne pepper is not only delicious in just about any savory dish, but it also provides great support for your immune system! It gets your circulatory system moving more quickly, keeping your veins and capillaries clear of toxins. It can also help increase your metabolism, which helps aid your stomach in digesting harmful bacteria.

Dishes to try: Tikka masala, Mayan hot chocolate or just about any recipe that could use spicing up!

Powdered or fresh ginger is packed with natural chemical compositions beneficial to immune function. The most important of the naturally occurring chemicals is gingerol. Gingerol works as an anti-inflammatory antioxidant in the body, which essentially “warms it up,” allowing the body to kill off bacteria and other toxins effectively, keeping you out of bed and capable of studying for your midterms!
Dishes to try: Ginger root tea, Ginger-citrus carrot salad with edamame and avocado or ginger-infused chicken soup!

For the Salad
5-6 carrots (this was a bunch for me), peeled and cut into matchsticks
1 cup frozen shelled edamame, thawed
¼ cup black sesame seeds
big handful of cilantro leaves, roughly chopped (mint or Thai basil would also be delicious)
salt and pepper
½ ripe avocado, peeled and chopped

For the Dressing
¼ cup fresh orange juice
juice of 1 lime
salt and pepper
1 ½ tbsp agave nectar/raw honey
1-inch piece of ginger, peeled and grated finely on a rasp/zester
couple drops of toasted sesame oil
¼ – ⅓ cup grapeseed or other neutral-tasting oil (I tend to like vinaigrettes on the more acidic side, so I go with less)

Directions:
Combine the veggies, seeds and herbs in a large bowl. Season the whole mixture with salt and pepper and toss lightly with your hands. Set aside.
In a separate bowl, combine the orange juice, lime juice, salt and pepper, agave nectar, ginger and sesame oil. Whisk it all together until incorporated. While whisking with one hand, slowly drizzle in the grapeseed oil until you have a homogenous and unified dressing.
Pour the dressing over the carrot + edamame mixture. Toss to combine. Top with the chopped avocado pieces. Garnish the dish with more sesame seeds and cilantro if you like.
Recipe courtesy of thefirstmess.com

Ah, yes. Garlic. Though this delicious recipe addition is so common, it is rarely noted for its immune properties. Garlic has antibacterial properties, good for clearing up congestion. It is also known for clearing up blood clots and alleviating high blood pressure.
Dishes to try: Garlic hummus, any pasta and garlic bread. Need I say more?

Another common ingredient uncommonly known for its virus fighting abilities. Cinnamon also acts as an antimicrobial agent in the body, breaking up mucus in the chest as well as promoting a healthy circulatory system. If you’re tempted to try the Cinnamon Challenge as a way of getting the benefit of this spice, you might want to rethink your methods. Cinnamon oil is available and delicious on its own or in tea!
Dishes to try: Greek moussaka, Sudanese cinnamon tea or apple cinnamon butternut squash soup.
Apple Cinnamon Butternut Squash Soup

Directions:
In Dutch oven, mix squash, apple, onion, brown sugar, salt, cinnamon and pepper. Add broth. Cover; heat to boiling over medium-high heat. Reduce heat; simmer about 20 minutes or until squash is tender.
In blender or food processor, place one-third of mixture. Cover and blend until smooth. Repeat twice to use up remaining soup. Return to Dutch oven, stir in milk and yogurt. Heat over low heat, stirring occasionally, just until heated through. Ladle into bowls; sprinkle with chives.
Recipe courtesy of Pillsbury.com.

Turmeric has been used by various cultures for centuries as a means of preventing illness. It is a natural destroyer of bacteria growing inside of the human body. Known for its mustard yellow coloring, this spice adds the kick you need to help prevent colds. It’s delicious, too!
Dishes to try: Turmeric-infused almond milk (surprisingly delicious and great for your health), red curry or turmeric-tahini dressing.

Before anyone goes out and assumes that this list is the end-all-be-all of wellness, keep in mind that these herbs and spices are simply boosters that act as a safeguard against illness. They in no way fully protect you, so it’s best to talk to a doctor about other options to help prevent illness this cold and flu season while you ingest these beneficial herbs and spices!