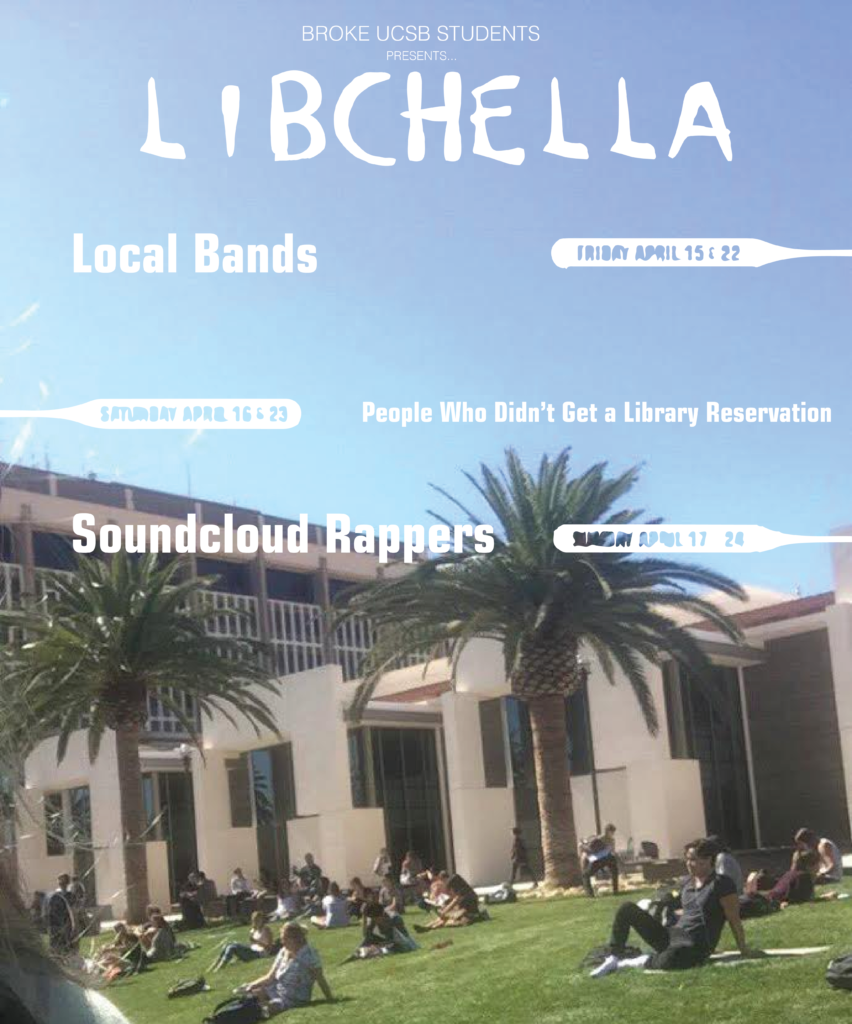 On Saturday afternoon, girls dressed in high-waisted shorts and debatably culturally insensitive Native American headdresses, and guys in bro tanks and bandanas gathered in front of the new library to rage in honor of a new event students are calling “Libchella.” The event was created after students grew tired of watching friends have the time of their lives at the Coachella music festival every year while they were stuck in I.V., still in debt from last quarter’s textbooks. Students decided to take matters into their own hands and organize their own version of Coachella — one that is free and takes place in front of UCSB’s very own Davidson Library.

Local bands and SoundCloud rappers took advantage of the free exposure and set up stages along the Arbor to perform. By the end of the day the event started actually resembling a real music festival.

One of the lead organizers of the event, Brad Lewis, a third-year political science major, praises the space provided by the new library as a pivotal part of Libchella.

“The new library remodel totally helped us out by giving us a lawn that really resembles the actual Coachella lawn. I can’t event tell the difference between Libchella and the real thing when scrolling through my Instagram feed,” Lewis said.

Several students even went so far as to park their cars on the chemistry lawn to start camping out Friday in preparation for “Libchella.” One student claimed, “It’s a total injustice to go to Libchella and not camp, like you miss out on the best part of completely immersing yourself in the festival. Honestly, why would you even go to Libchella if you aren’t going to camp out?”

“Libchella is all about ballin’ on a budget with fellow Gauchos.”

Jamie Parker, second-year sociology major, originally attended the event in an attempt to get a picture in front of the library palm trees and pretend she was actually at Coachella, but ended up staying after seeing the atmosphere of the event.

“I realized everyone here was just as sick of seeing wannabe Urban Outfitters models in the middle of the dessert and taking stalker Snapchats of Kendall and Kylie Jenner as I was,” Parker said. “Libchella is all about ballin’ on a budget with fellow Gauchos.”

Libchella’s success was immense but short-lived; local police eventually shut down the event after intoxicated students tried to drive through the glass doors of the library in order to gain entry to the bathrooms. However, the memory of Libchella lives on, and those who missed it for Coachella say they hope to attend next year, claiming Coachella has become way too mainstream and Libchella is more about exposing festival-goers to “real music.”

A. Gaucho is a first-year communication major who wishes she could afford to go to Coachella.