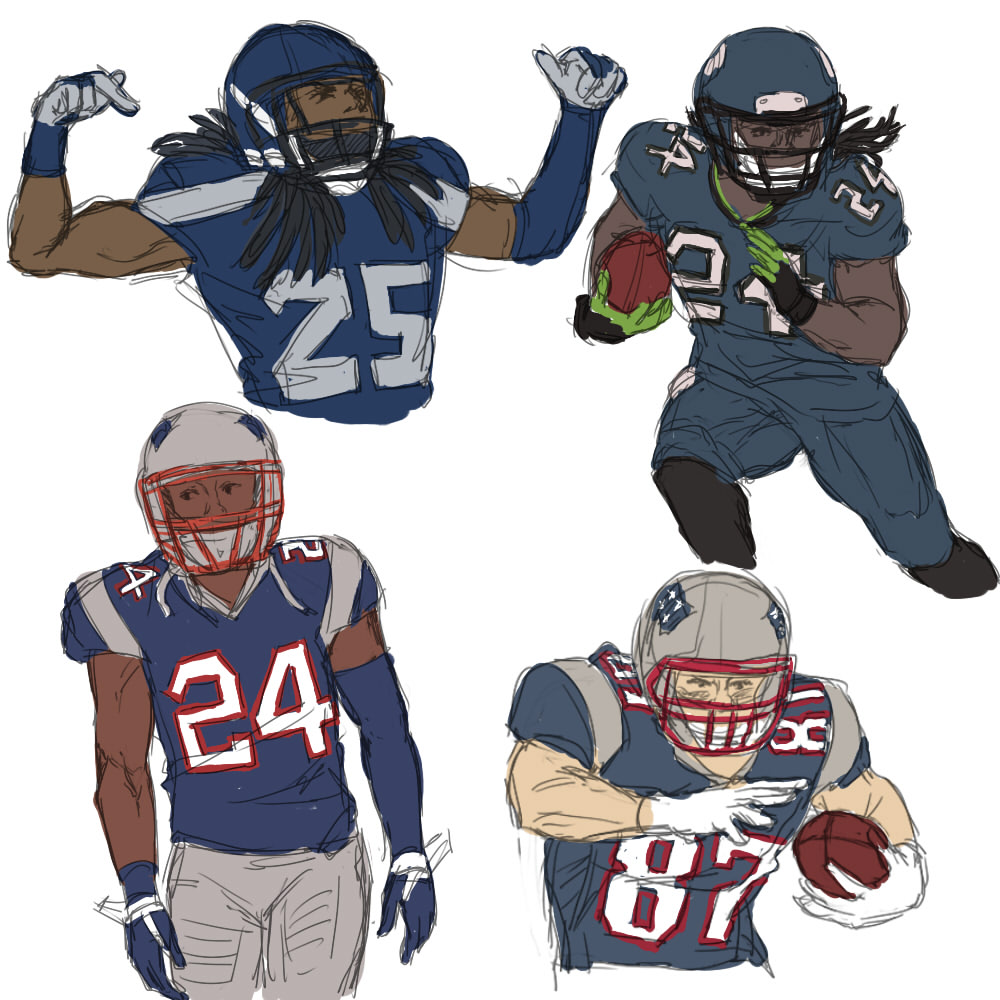 Tom Brady vs. Legion of Boom by Daniel Moebus-Bowles

The real question on everyone’s mind heading into Sunday is whether Tom Brady will show up or if he’ll pull a “Peyton” against this well respected defense. Coincidentally enough, it seems that the only time this HOF quarterback doesn’t show up for the February bowl game is when he is playing against the other Manning, and luckily for him, he isn’t this time. Instead, he will be taking on a much tougher opponent in the Legion of Boom.

Richard Sherman, Kam Chancellor, Earl Thomas and Byron Maxwell have had their share of chances to beat up offenses this season. What makes these players so special is the fact that every one of them is capable of being the best defensive player on the field in any given game.

This secondary is easily the best in football, but they have experienced some hiccups along the road. Where they seem to struggle is on the long balls, but luckily for them, that is something that Brady does not do very often. What the Legion of Boom covers best is any pass that’s in front of them, so if they can do what they do best for just one more game, they will add back-to-back champs to their résumé.

We have seen the Seahawks tear apart limb from limb every elite quarterback with the exception of one: Thomas Edward Brady. This man is going into his sixth Bowl with the same franchise and head coach he’s had his whole career, and I highly doubt that he is looking to lose his third straight.

If there is anyone in this league that can break up this strong defense, then it is definitely Brady. Unfortunately, the Patriots have just about the worst receiving core in the league besides Seattle, which doesn’t give him many options besides tight end Rob Gronkowski, his best receiver.

Regardless of having nobody to pass to except Brandon Lafell and Danny Amendola, this QB has still gotten his usual passing number and has once again taken his offense to the last game of the season.  He has defeated top passing defenses this year like Cincinnati, Denver, Indianapolis and Buffalo twice. Rumors have it that injuries may affect both Sherman and Thomas and it is almost a guarantee that Brady will look to expose them on Sunday. It takes a madman to bet against this QB/Head Coaching duo.

Defenses do win championships, but legendary players conquer all.

After an undoubtedly heroic performance in the Seattle Seahawks’ triumphant 28-22 comeback win over the Green Bay Packers in the NFC Championship, quarterback Russell Wilson is just one win away from leading his team to another Super Bowl victory.

But he must first find a way to surpass a New England Patriots secondary that has been playing lockdown defense since the postseason began. In just two playoff games, the Patriots have a total of four interceptions and even held the Indianapolis Colts’ quarterback Andrew Luck to just 126 passing yards in the AFC Championship.

With arguably one of the best cornerbacks in the NFL in Darrelle Revis, the Patriots automatically have an advantage coming into Sunday’s matchup. His ability to isolate and remove wide receivers from games by placing them on “Revis Island” can take away from a quarterback’s passing.

Additionally, former Seahawk and “Legion of Boom” member Brandon Browner may be able to inform New England’s secondary with some insight on how to contain Russell Wilson.

Although the Patriots may be able to limit Wilson’s amount of pass completions, they must be able to stop him outside of the pocket. His capability to scramble and make plays under pressure may be the most underrated aspect of this game. Wilson’s dual-threat skill set is what will allow the Seahawks to repeat as NFL champions. Expect a Seattle win as he proves yet again why he is so “DangerRuss.”

Trying to debate whether Bill Belichick or Pete Carroll will fare better in the Super Bowl is much like debating which is the lesser of two evils in my book, because if you are not a Patriots or Seahawks fan, you probably are not too fond of either team.

However, putting personal preferences aside, these two teams got to the Super Bowl because they rely on those two evils — and ultimately, it was coaching that elevated both teams to Championship level.

Let’s start this off by saying my money is on the Seahawks. Pete Carroll and the gang are coming off of an emotional victory over the Packers in the NFC Championship game. I think that any team will have a hard time upsetting that game flow, but I think if someone is going to give it a shot, it is going to be Belichick.

Based on pure statistics in the NFL, there’s no questioning that the football genius that lies within Belichick’s brain is incredible, with three Super Bowl titles, six conference championships and 14 divisional championships. None of that, however, discredits the decoration Carroll received while he ran the USC empire.

Carroll had nine years coaching in college football and emerged from his legacy with a .836 win percentage, on top of a 7-2 Bowl game record. Ignoring his short stint with, ironically, the Patriots in the late 90s, since his re-entry into the NFL in 2010, he already has one Super Bowl title with the Legion of Boom.

I think the deeper team going into Sunday is the Patriots, and it is obvious that Belichick knows exactly how to play his stars in every aspect that he can. Belichick is no stranger to a strong defense, and he runs a tight special teams. Those two aspects are what win Super Bowls.

It is very rare that a team can win two straight titles, and when it comes down to coaching, Carroll is a man that craves a legacy no matter where it takes him, whereas Belichick is a coach that will stick to his team.

Where usually the latter mindset is what drives a team to be a cohesive and well-oiled machine, in this situation, I think the Pats know that this Super Bowl is not the end for them. They still have the legs to go for a few more years. Quarterback Tom Brady is a monster and Gronkowsi’s youth keeps the team fresh. The Patriots will simply not stop being good after this game.

Though I cannot say this with certainty, I truly believe that same statement does not go for the Seahawks. This Super Bowl is Seattle’s chance of going down in history. I think Carroll will chase that dream through Sunday night and do everything it takes to achieve that goal.

Marshawn Lynch may be a man of few words, but his polarizing running style has been the topic of conversation since he entered the league in 2007.

“Beast Mode,” as he is known around Seattle, has perfected the art of letting his performance do the talking. So in true Marshawn fashion, we shall leave the hype alone and simply let statistics tell the story.

Lynch is widely known as one of the most powerful running backs in the game today and for good reason. This season, he broke an NFL leading 109 tackles. Compare this to DeMarco Murray who finished in second place with 38 fewer broken tackles despite 117 more attempts.

This bruising style of running helped Lynch lead the league in yards up the the middle this season. When Lynch is able to get at least 20 carries or break off a 20-yard run, the Seahawks are 24 games over .500. When neither of these instances occurs, the Seahawks are a mere one game over .500.

On the opposite side of the ball, the Patriots have vastly improved their run defense this season. In 2013, the Patriots allowed a staggering 134.1 rushing yards per game, which ranked 30th in the league.

This year, however, they rank in the top ten of the league, allowing just 104.3 rushing yards per game. The Patriots have carried their tough run defense into the playoffs as they have allowed only one rushing touchdown and have not let an opponent break off a 20-yard run this postseason. The Seahawks surely hold the advantage in this matchup with one of the most prolific running backs in the game, but the Patriots’ enhanced run defense will not go down without a fight.

Seattle’s strong safety Kam Chancellor, however, matches up well with Gronk and will be the one in charge of containing him. Chancellor, listed at 6’3”, 232 lbs., is just as physical and big to keep up with the tight end.

One thing Chancellor absolutely needs to do to win this matchup is stop Gronkowski at the line of scrimmage, because he is such a force in the open field and Tom Brady will definitely find him.

If the Patriots get to the red zone, then Chancellor will also have to take away the slant route New England uses to target its playing-making tight end.
Gronkowski will get his looks, but Kam needs to win the majority of the battles for Seattle to gain the upper hand. So who will come up on top? Well, we’ll see soon enough.