The Daily Nexus, the historic and direct descendant of UCSB student news enterprises dating back nearly 100 years needs donations of any size in order to keep publishing, in print and on the web.

Like every other college newspaper, The Nexus is fighting to survive in the new media era. UCSB student journalists, who spend countless hours digging out stories about the inner workings of the University and the activities and culture of Isla Vista, have recently expanded and upgraded their newsroom’s web site and online reporting working to tell the story of UCSB on multiple platforms.

The staff won national recognition for its minute-by-minute coverage of the tragedy of the killing spree that struck IV last year, just one example of the kind of its award-winning reporting, which connects the entire campus community.

Nexus journalists receive no core funding from the University. Nor do they have the luxury of an academic journalism department to support their efforts. Its staff needs money for student salaries and professional development training, in addition to new equipment to gather, create and distribute its news, feature, opinion and sports content in the varied ways that its audience expects – through web, print, podcast and video presentations.

The Daily Nexus is the only independent news organization at UCSB.

Without its presence on campus, the campus and Santa Barbara will lose a major and essential resource for unbiased, agenda-free reporting.

Please give to keep the Nexus alive, and always independent.

Click here to be redirected to the donations page. Choose the Daily Nexus from the drop down menu on the Student Affairs gift fund page, and all your donations will go directly to the Daily Nexus.

“I would not be the student, community member and person I am today without the experiences and life values I have learned from working at the Daily Nexus. As a nationally acclaimed, independently-run student newspaper dedicated to producing meaningful and timely news and editorial content for the UCSB community and beyond, there is truly no other place on campus where I have felt my intellect, work ethic, creativity, communication skills and empathy flourish not only for my own personal growth, but also for the betterment of my community. Along with allowing student staff members to hone critical thinking skills, communication skills and writing skills, the Nexus fosters a desire within participating students to become agents of positive, progressive change in the UCSB community and in the world.” – Carissa Quiambao, Daily Nexus editor-in-chief 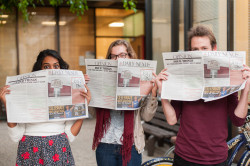 The Daily Nexus is the student-run press of the University of California, Santa Barbara campus, and as such, we, the editors, place the interests and needs of the campus community above all else, and seek to provide meaningful and essential news, editorial and feature coverage to our readers. We feel that it is more than just a privilege to publish a student newspaper, but a duty demanded by a democratic society, thus we carry out our duty to the best of our abilities, following the high standards of professionalism as outlined in the American Society of Newspaper Editors’ Statement of Principles. Additionally, in alignment with the changing technological demands of the 21st century, we strive to produce accurate and engaging online content in a fashion that allows for more reach, engagement, and accessibility to student readers.

Since the 1930s, the Nexus — under various other names — has been keeping tabs on UC Santa Barbara and the surrounding communities, breaking several noteworthy stories such as the 1986 exposé of Chancellor Robert Huttenback for his misappropriation of UC funds, to up-to-date, thorough coverage of the May 23, 2014 Isla Vista shootings, which gained the publication mentions in national and international publications. The Daily Nexus’ name was coined by the paper’s 1970 to 1971 editorial board in the wake of the 1970 Bank of America burning in Isla Vista, attributed from Robert Maynard Hutchins’ quote: “A free press is the nexus of any democracy.”

The Nexus provides timely, relevant and essential editorial and feature coverage to students as well as readers throughout the UCSB community and Santa Barbara County with fairness and accuracy, whether they are the views of the many or those of the few.

We defend the rights of any member of the university communities if those rights are abridged, and present all sides of the case. Because publishing a student newspaper is our duty, we carry out that duty following standards of professionalism as outlined in the American Society of Newspaper Editors’ Statement of Principles.

In regard to social media, the Nexus has increased its presence on Facebook and Twitter in order to reach more of the UCSB community. Our Facebook page currently has 2.7K followers, and our Twitter account has 2.8K followers. The graph below quantifies the population that has been reached from May 1, 2014 to June 18, 2014 through the Nexus Facebook page.

In the 2013 to 2014 academic school year the UC Santa Barbara community underwent a number of tumultuous events, all of which the Nexus has provided top-of-the-line coverage for. This past year the Nexus produced breaking news stories involving April’s meningitis outbreak and Isla Vista’s Deltopia riots, as well as national and international recognition for coverage on May 23rd’s Isla Vista tragedy.

The Nexus was placed 9th on The Princeton Review’s list of “Best College Newspapers” for the second time in a row in 2013, and continues to be the only newspaper produced by a University of California to be placed on the list. Several editors and stories also received awards from the 2013 California College Media Association awards, placing in categories such as Best Feature Story, Best Personal Opinion Column and Best Back to School/Orientation Issue. 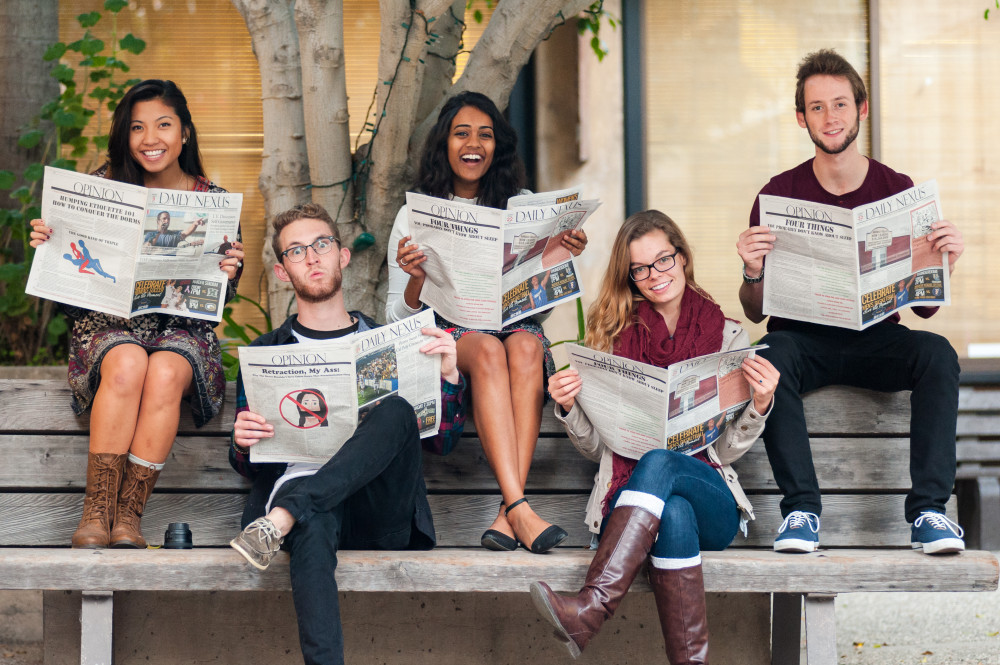 Click here to be redirected to the donations page. Choose the Daily Nexus from the drop down menu on the Student Affairs gift fund page, and all your donations will go directly to the Daily Nexus.

(Add yourself to the alumni corner. Send an email to production@dailynexus.com)

Assistant Art Director – Seattle magazine, Seattle Bride magazine, Oregon Bride magazine.
“The Nexus became my family in college – my crazy, food-loving, sleep-deprived family. I learned so much from each of these amazingly passionate people, things that I use every day. You’d be surprised how important Facebook creeping and comical photoshopping can be in a professional setting.”
Christina Ziegler-McPherson (Chris Ziegler) 1987-1992
Public Historian, currently unaffiliated with a university

Christina A. Ziegler-McPherson, Ph.D
Fulbright Scholar
University of Bremen, Germany
“The greatest, smartest, cheesiest group of people I have ever been privileged to work with.
(Old Nexus mugshot for my press pass!)
Deborah Rafii, 1992-1996

Former Sports Writer and Editor
“I cherish the memories of spending hours at the Daily Nexus office, writing and editing on the now-antiquated computers. I joined as a staff writer for the “Sports” section my freshman year. Despite limited knowledge of sports like Track and Lacrosse, my mentors provided me with many opportunities to learn and grow as a journalist and writer. By my junior year, I was the editor of the section and felt comfortable writing about all sports on campus. I am forever grateful for that experience.