Going into the winter break the Gauchos were rolling, taking a two-game winning streak into the game against San Diego Christian College. 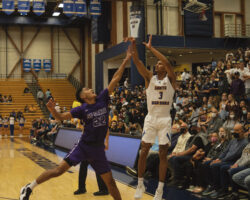 After the game against the University of Pacific, Head Coach Joe Pasternack talked about closing games and putting the other teams out of reach.

“I thought at the end of the game we were fatigued, and we didn’t block out and rebound and we fouled. I thought we played guys a lot of minutes, but you know at the end of the day we competed at a championship-level on defense. And that’s what you can ask for, but not happy with our rebounding gave up 15 offensive rebounds, which we were the number two in the country defensive rebounding before the game, and we let up, we totally let up, we played the score. You can’t play the score in college basketball,” Pasternack said.

The Gauchos made the adjustment coach Pasternack was looking for in the victory against the San Diego Christian Hawks. The Gauchos dominated the game from the start putting up a 48-22 lead going into the half.

They controlled the boards gaining 39 rebounds to the Hawks 15 and gaining 13 offensive rebounds as opposed to 7 from San Diego Christian. The Gauchos also played a good brand of defense, committing just 11 fouls throughout the full 40 minutes, playing a season high 16 players on the roster.

The bench came alive in their opportunity in the blowout game outscoring the opponents bench by a score of 49-17. One of UCSB’s top recruits nationally ranked in the 2022 class, freshman forward Koat Keat Tong performed to his ability adding a team-high 5 rebounds, an assist and a block.

UCSB moved on to take down Portland State University on the road in their 85-73 victory. This match featured another breakout game for the star point-guard sophomore Ajay Mitchell.

After a tough shooting stretch to start the season, Mitchell had backed it up with shooting the three balls consistently better. Against Portland, he did not manage a 3-pointer made in his single attempt but managed to score 25 points on an efficient 10-17 shooting from the field, while also adding 7 rebounds and 5 assists.

Senior forward Miles Norris put together a quiet double-double with 12 points and 10 rebounds, making 8-10 from the free throw line. Senior guard Calvin Wishart provided the spark off the bench by adding 13 points on a perfect 8-8 from the line. Senior guard Josh Pierre-Louis provided the defensive toughness for the Gauchos, racking up 3 steals before fouling out in the second half.

The Gauchos move on to face a talented Appalachian State University. This is a team that took down perennial powerhouse University of Louisville and lost by one to a Wake Forest University team who already have taken down a ranked Duke program.

The key to slowing the Appalachian Mountaineers will be containing the 3-man trio of senior forward Donovan Gregory, graduate student point-guard Tyree Boykin, and sophomore guard Terence Harcum. The combined scoring of these three reaches slightly above 30 points per game. As for the rest of the team, the assists and rebounds are evenly distributed, showing a balance of play from an experienced Appalachian State team.

The Gauchos will take on the Mountaineers on Wednesday, Dec. 21 in Phoenix for the Jerry Colangelo Classic invite tournament.