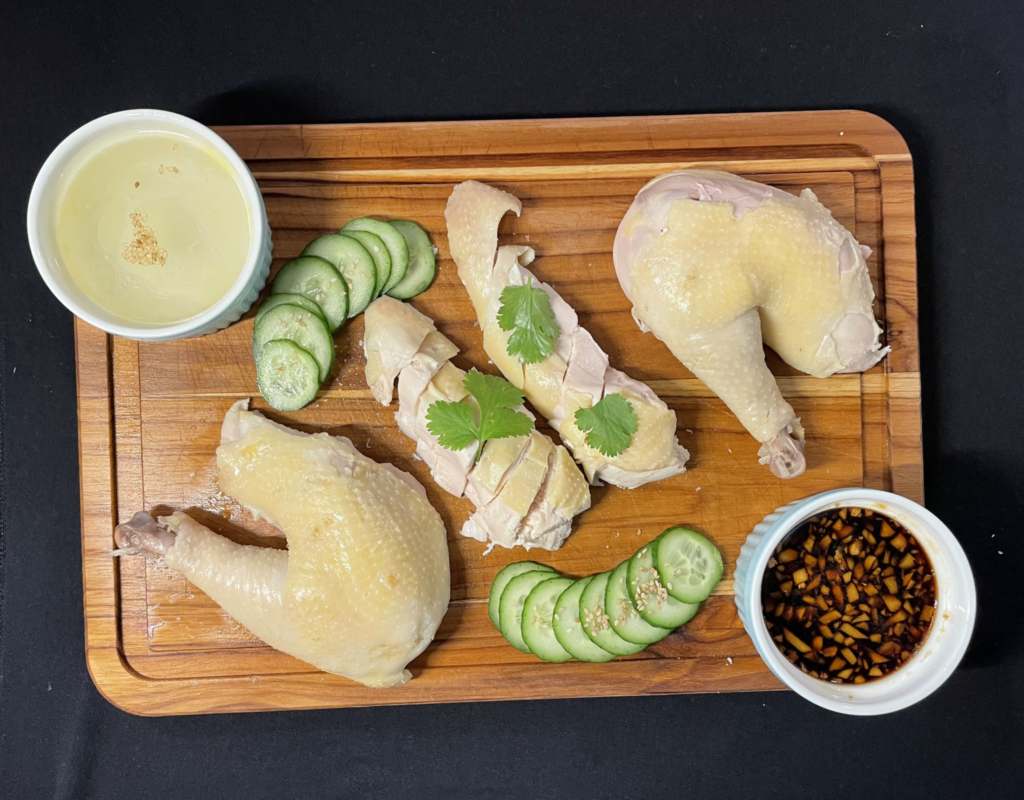 This November, I decided to host a Friendsgiving, which I’ve never done before. For my offering, I initially decided upon cooking a Peking duck, but I accidentally bought a chicken without realizing it (I don’t know how I made that mistake either). So, instead of a Peking duck, I chose to cook a Hainanese chicken, a dish originating from the island of Hainan off the southern coast of China. The dish itself is a poached chicken, served with rice seasoned with the fat of the chicken alongside a variety of sauces, such as garlic soy sauce and chili sauce.

I used Adam Liaw’s recipe as a guideline for the chicken rice. I started with preparing the chicken (which my roommates and I affectionately named “Daffy” before learning that it was chicken), and this entailed trimming the fat near the butt of the chicken and massaging the rest of the bird with a generous amount of salt. I then cut up some green onions and ginger and added that to a pot, along with the water I was going to poach the chicken in and brought that to a boil. The fragrance of the broth was heavenly and the scent of ginger filled the room. I put the chicken in the broth and brought the heat down to a simmer so as to not toughen the chicken. I constantly monitored the temperature of the bird with a probe thermometer; I needed this chicken to be at the very least edible, and preferably on the pleasant side, but anyone who’s tasted overcooked chicken will know that it can have the texture of chalk. After about 30 minutes in the water, the chicken was done. I placed it in an ice bath to cool and shock the skin, and let it rest for a while until it was time to carve.

While the chicken was cooling, I prepared my roasted potatoes as a side while my roommates were making their own dishes: my roommate Kyle made guacamole and a tofu stir-fry, and my roommate Kole made a chicken salad. The kitchen was chaotic, but it was really nice to have us all cooking in the same kitchen together. We didn’t really collaborate as we were all cooking our own separate dishes, but they provided invaluable company, and I was grateful for their contributions. Dinner was soon ready, and we were all seated, anxiously awaiting our meal.

The food was delicious; everyone’s dishes came out fantastic. I was nervous about how the chicken would come out since this was my first time making Hainanese chicken but, to our delight, the chicken was quite tender, and I served it with a dipping garlic soy sauce which added a sweet and salty depth. This is probably not a common problem, but if you ever need to use a whole chicken, you can’t go wrong with cooking it Hainanese style. The meal wasn’t really about the chicken, though — I know this is excessively cheesy and I’m laying it on thick, but having a sit-down dinner with my close friends nearing the end of the quarter was really heartwarming. We sat and talked and laughed and just had a lovely time. Food and cooking are wonderful in their power to bring people together and are truly invaluable for creating cherished memories.