Coming to UC Santa Barbara, I never expected to find — let alone stumble upon — an Indian restaurant so close to campus. Late at night within the first week of moving in, sitting under the harsh glow of the Rosarito sign, I suddenly found myself back at home: sizzling garlic naan in the oven, bubbling paneer butter masala in the pot, transported by a smell so familiar to my nose that suddenly bombarded me. I watched two people walk by with stacked styrofoam containers, a familiar foil shape on top and instinctively knew what they had just ordered.

On the other end of the complex housing Rosarito, in a small, unassuming building with no flashy lights or hubbub, I found Naan Stop: Indian Food & Boba Tea. Their menu offers a tremendous variety of fried entrees, curries, breads, Indian desserts — the usual that I expected — but I was surprised by the selection of drinks. Typically, Indian restaurants limit their beverage options to the quintessential options: lassi, masala chai, water and perhaps soda. But boba tea? It was outside of their niche. Yet Naan Stop offers a variety of boba teas, including, but not limited to: Thai tea, green tea and snow bubble. Still, I opted for the classic mango lassi, which was a little thicker and more yogurty than expected but not unpleasant in the slightest, since the freshness of the mango carried through every small sip.

The serving style resembles Chipotle, with the option of assembling a rice bowl or combo plate with assorted curries on display to the customer. Alternatively, diners can simply order a curry itself to accompany a bread of their choice.

That night, I was told the full menu was off the table. I was only slightly disappointed that their extensive menu was reduced to the eight colorful curries before my eyes. However, this made the decision-making process a lot easier, since I knew beforehand what each curry looked like, smelled like and could imagine myself ordering it. I immediately gravitated toward the paneer tikka masala, a cream-and-tomato-based Indian curry with a nutty fullness and soft cubes of cottage cheese. I found the curry to be more watery in consistency than I was used to, but not at a cost to flavor. Other curry options the restaurant typically offers include chicken tikka masala, chana masala, lamb korma and fun Western varieties catering to the locale — such as shrimp tikka masala. 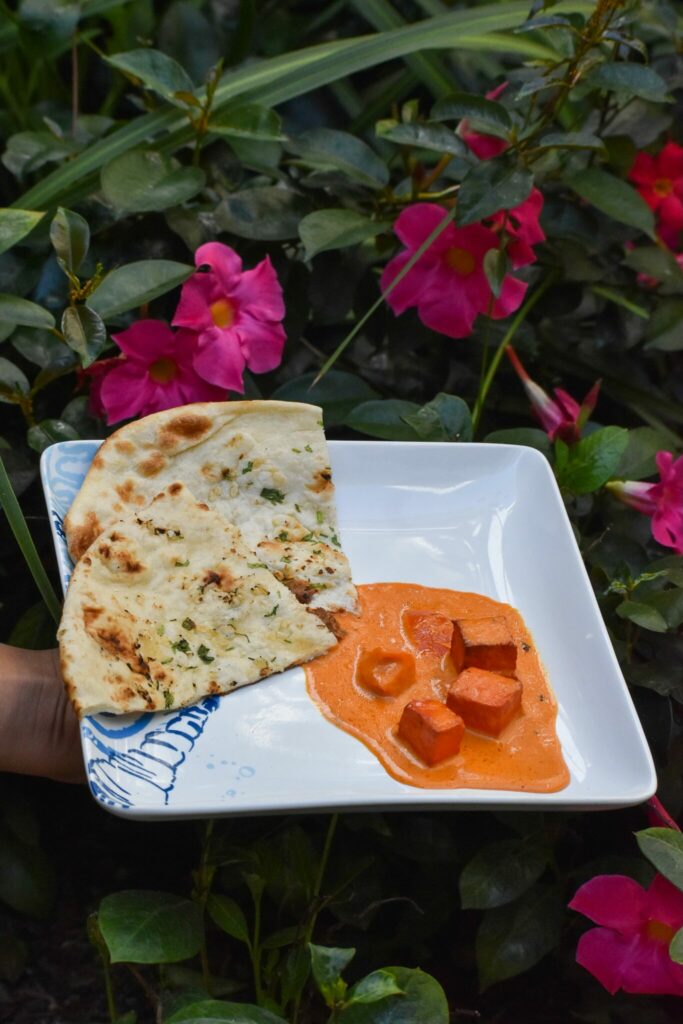 As a vegetarian, I never once felt alienated throughout my visit. Naan Stop caters to all diets in full: vegetarians, non-vegetarians, and vegans alike can find ease in ordering here. Even various spice levels can be managed. What I missed from back home the most were my green chilis and hot sauce. Here, the bread options ranged from the classic naan bread, aloo paratha and roti, to cheese naan, garlic naan and the ultimate combo that I ended up choosing: chili garlic naan. The kick was undeniable. Furthermore, while the menu items don’t clearly indicate if there are nuts or common allergens in the dishes, asking the staff can satisfy any questions on that matter.

I left a little less homesick that night, the rich paneer, soft, pillowy naan and thick mango lassi a memory on my lips that I knew would lure me back every weekend — all at a cost under $20. If you’re looking for relatively affordable and aromatic Indian curries with multicultural deviations to surprise, make Naan Stop your next stop.

Meanwhile, here’s a recipe for the traditional version of mango lassi, a simple, refreshing lassi that you can easily make on your own!