The Daily Nexus
News
Incumbents succeed in reelection bids down the ballot; local races decided by a handful of votes
November 10, 2022 at 10:15 am by Nisha Malley, Asumi Shuda, Mark Alfred, Holly Rusch and Sindhu Ananthavel

The Nov. 8 midterm election proved a successful night for Democratic Party candidates and incumbent officials seeking reelection down the ballot, from statewide to local races for Isla Vista and Santa Barbara County representatives. 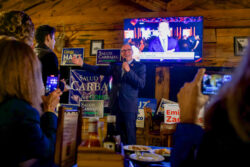 Despite the many ballot issues at stake in this year’s election — notably, the race for California governor and a state constitutional amendment to provide abortion rights — voter turnout dipped to a recent low in Santa Barbara County.

Santa Barbara County voters cast 75,799 ballots of 237,759 voters, amounting to a turnout rate of 31.88%. This paled in comparison to the turnout rates of the 2018 midterm election, when a record-breaking number of voters participated.

Elections in Isla Vista demonstrated even lower turnout, resulting in two special district races being decided by a margin of under 50 votes.

Congressman Salud Carbajal won reelection for U.S. Representative of the 24th District with 60.34% of the vote against Republican Brad Allen, a businessman, researcher and pediatric surgeon. Successfully protecting his seat in Congress, Carbajal will go on to serve a fourth term, representing Santa Barbara County and the Central Coast.

“I want to thank the voters for reaffirming our work and giving me another term to continue to fight for the values and the priorities of the Central Coast, to fight for women’s rights,” Carbajal said in a speech at the event. “To fight against climate change, health care, lower prescription drug costs, transition from fossil fuels to clean energy, making sure we have safer communities through gun safety laws.”

Hart said he felt “bittersweet” about his victory, highlighting his appreciation for his colleagues on the Santa Barbara County Board of Supervisors and the community he has dedicatedly served.

“I am very bittersweet, and I’m very proud of the support that I received from our community,” he said in an interview. “I believe it’s a reflection of the respect that the residents of the 37th assembly district have for the work that I have done for many years as an elected official.”

Hart prided himself in the efforts he has put in his current position as 2nd District Supervisor and hopes to continue advocating and representing his community in his upcoming position as the 37th District Representative.

Hart said that his approach to campaigning, by avoiding negative attacks on his opponents, likely resonated with his voters.

“I ran a scrupulously positive campaign, never attacked my opponent, and I think that the voters respected that approach,” he said. “That’s how I want to be as an elected official — bringing people together and finding common ground and respectfully disagreeing when we do, but always leading with integrity and respect.”

Entering office, Hart’s priority is to focus on economic issues, particularly on sectors of education, housing and energy.

“The economy is at the top of mind,” Hart said. “Prices are increasing, and that’s a real challenge on family budgets, so making sure that the state invests taxpayer dollars efficiently and prudently and with an eye to growing the economy is the first order of business for the legislature.”

Hart noted that investment decisions must be “strategic” to ensure that the legislature is heading in the right direction on issues regarding education, environmental conservation and houselessness, among others.

“We need to invest in education because that prepares the workforce for the future jobs that we need. We need to invest in renewable energy to protect our climate, and to make sure that we’re respecting the environment for future generations,” Hart said.

Regardless, Hart was melancholy about leaving his position of 2nd District Representative, reminiscing on the weekly meetings he’s had with his colleagues during his previous term.

“I really respect my colleagues and the relationship that we built together and the work that we have done together, and I will miss seeing them every Tuesday,” Hart said. “But  know that we’re going to stay close allies and partners in the work ahead because the relationship between the county, all the cities in both counties and our state representatives is crucial.”

In a remarkably close four-way race for two open IVRPD director seats, candidates Brendan Hutchinson and Thea Neushul rose to the top, winning 30.39% and 27.21% of the vote, respectively. Scott Ball came third in the race with 22.54% of the vote, followed by Heidi Diaz with 18.97%.

Only 794 people voted in the IVRPD race, far below the 5,894 registered voters in Isla Vista. Ball earned just 47 votes less than Neushul, who won her election bid.

None of the candidates for IVRPD Board of Directors were available for comment.

In a three-way race for two available seats, challenger Julia Barbosa failed to unseat incumbents IVCSD Board President Spencer Brandt and Director Jay Freeman. Brandt ended election night with the most votes at 42.08%, followed by Freeman with 30.9% of the vote and Barbosa with 26.25%. Barbosa is currently serving her term as Isla Vista Recreation & Park District Director, which is set to expire this December.

University of Santa Barbara second-year environmental studies major and IVCSD candidate Olivia Craig won the two-year seat with 67.47% of the vote. Craig beat out Henry Sarria, an Isla Vista resident of over 35 years, who received 32.21% of the vote.

Craig’s victory comes after extensive canvassing and tabling on campus for over a month, she told the Nexus. She also received an endorsement from the Santa Barbara County Democratic Party.

“The only campaign funding I had was $250 from the Santa Barbara Women’s Political Committee. Besides that it was volunteers and people who were taking the time to speak to me, and that was incredible,” Craig said.

Craig attributed her win to her campaigning efforts and student status, with the appeal of a student voice in local government galvanizing the student vote.

“I think that when I go out and I knock on doors and I tell people that I’m running [for IVCSD], and they see someone who looks like them, that is something that gathers support — the fact that I’m a student,” Craig said

Craig and Sarria both voiced disappointment in the voter turnout.

“The only thing I’m disappointed about is there were only 791 ballots including mail-in,” Sarria told the Nexus. “But people got out and voted, they voted their way, and I think that’s a good thing.”

“Ms. Craig is a wonderful candidate. She’ll do fantastic with the job and whatever support she needs from me is there,” Sarria said.

Freeman — a resident of I.V. since 1999 and one of the Isla Vista Community Services District’s original board directors — defended his IVCSD seat against challenger Julia Barbosa. Freeman underscored the closeness of the race, with only 42 votes separating him from Barbosa as of 2 p.m. on Wednesday.

“I don’t think sometimes people realize how close these elections are. The difference between Julia and I was 42 votes,” he said. “That’s like, you get your friends together and go to the ballot and you can influence that.”

Freeman said that the tight race underlines the importance of voting in local elections, which often see less turnout and enthusiasm than national and statewide elections.

“These are close elections because we have such little turnout. But because of that every vote matters,” Freeman said. “So if you ever think that ‘You know what, why am I bothering to vote it doesn’t make any difference’ — it really does.”

Spencer Brandt, IVCSD’s other reelected four-year board member, won his election with 42.08% of the vote and said he was looking forward to continuing his work for the constituents of I.V.

“I’m really honored that it looks like I’ll be reelected by the voters to continue to serve our community for four more years,” Brandt said. “I’m excited to continue to work with my colleagues to improve Isla Vista, work with our partners to take on new pressing challenges like transportation and infrastructure, and continue working to make Isla Vista cleaner, safer and more sustainable.”

During his time campaigning for the seat, Brandt said voters reinforced the importance of political representation at a local level.

“The things that I heard most from voters is that representation for our community matters. And what that really means is that students and residents need to be involved in our local government, they need to have a seat at the table to be able to effect change in our community,” he said.

Brandt attributed his victory and similar election night wins for progressive candidates across the nation to younger, college-aged voters like the ones that reside in I.V.