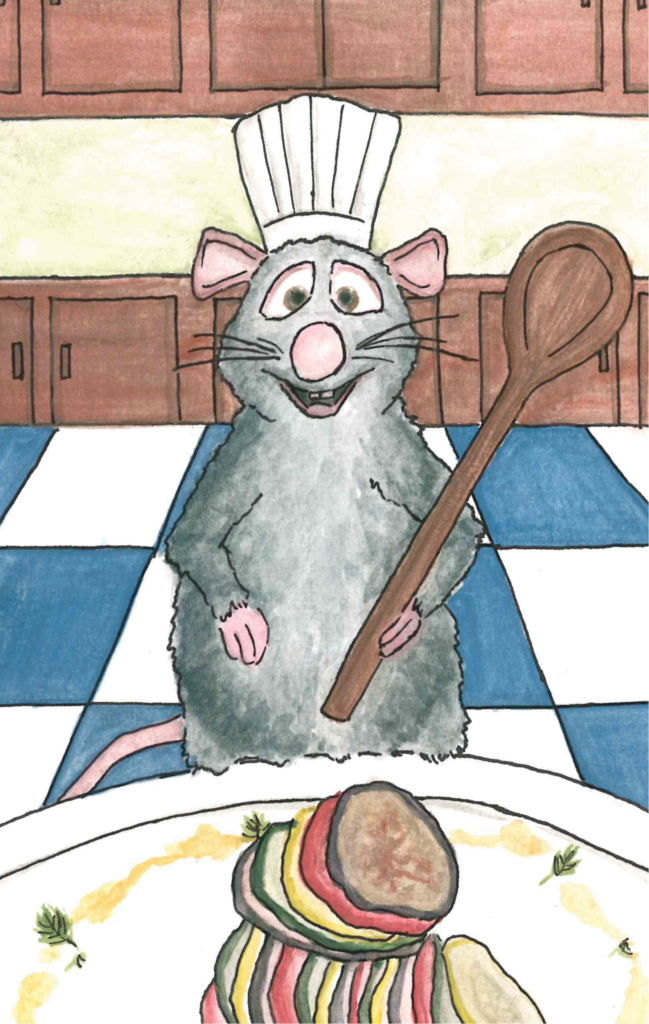 In the decade and a half since the film’s release, ratatouille, once a modest commoner’s meal, has risen to fame as a popular statement dish. Simone Mansell / Daily Nexus

There perhaps has been no dish whose reputation has been laundered more effectively by a piece of fiction than the humble ratatouille — the roasted vegetable casserole that formed the centerpiece of arguably the best film centered around a cooking rodent, Pixar’s “Ratatouille.” If you somehow have managed to get this far in life without seeing the film, here is how it goes: At the film’s climax, notoriously vile food critic Anton Ego arrives to review the restaurant helmed by protagonist Remy (a rat of remarkable culinary acumen). But instead of giving the elitist Ego an outwardly sophisticated dish from the world of haute French cuisine, Remy opts for a different choice: the titular dish prepared confit byaldi style, with thin rounds of sliced tomato, zucchini and eggplant shingled atop a sauce of roasted red peppers, tomatoes, onion and garlic and then baked — the flavors of which, as it turns out, reminds Ego of his mother’s cooking, finally shattering his bitter, cold, critical veneer.

In the decade and a half since the film’s release, ratatouille, once a modest commoner’s meal, has risen to fame as a popular statement dish — and why wouldn’t it be? It’s gorgeous, with cascading, multicolored stripes circling its baking dish and an apparent delicateness when placed upon the plate with a spoonful of brilliant orange sauce encircling it. Ratatouille is a feast, as they say, for the eyes, perfectly suited to visual mediums like Instagram feeds, YouTube cooking videos and, yes, the silver screen. But it’s also a dish that I’d wager most people haven’t ever tried to make themselves — its need for copious amounts of thinly sliced and delicately arranged produce means that ratatouille, at least in its dressed-up film form, is too labor intensive for most people to do alone. But what are friends for, if not to help you make a dish from a movie about a cooking rodent? So on one of the last nights of the dying summer, we gathered at a friend’s house on Del Playa Drive to answer a simple question: Is ratatouille as good as it looks?

Well, no. It’s not bad (far from it, in fact), but it’s not a dish that will blow you away by any means — and certainly not a dish that will give you flashbacks to your childhood and change your entire outlook on life with a single mouthful. Perhaps my disappointment can be attributed to the heightened expectations I had from the film. In the movie, the vegetable slices have a pliable, pleasing firmness to them; in real life the hour in the oven breaks them down to a soft, unremarkable mush that flops limply atop the tines of a fork. That brilliant orange sauce? It’s aromatic, certainly, with a hint of bite and smoke from the charred peppers. Yet it is all a hint, all a suggestion. I find the intensive roasting processes used here, much like the rest of the dish, mellow these bright, distinctive, vegetal flavors down to the point of vaguity. It’s all a bit one-note; I found myself wanting for something else — some acid, some spice, some robustness, some depth, some “je ne sais quoi.” I think that ratatouille’s mild flavors are more suited toward a role as an appetizer or perhaps a side dish to support a more heavily flavored protein. But as the starring role? I don’t think, given the labor required, it’s quite worth it.

And yet. And yet. Isn’t that what films are about? The fact that events, scenes, sequences must follow themselves, one after the other, no matter how dire the situation may seem. And yet — something must happen. There is no story otherwise. The lovers break up, and yet one runs to stop the other from boarding the airplane. Colette leaves after Linguini reveals his secret, and yet she returns to help save the restaurant. One door closes, and yet another opens. And yet. And yet. We are searching, always, for a twist in the narrative, another turn to the tale. So here is one.

The taste of ratatouille, I think, is largely irrelevant. You will eat plenty of better food in your life, I’m sure — more exciting, more dynamic cocktails of salt, fat, acid, heat. But the question of culinary value has a far simpler, more abstract explanation, even among those of us who have eaten enough good food to fill several lifetimes: “As I’ve become older,” the late Anthony Bourdain once said, “I realize the food that I yearn for is the food I react to in an entirely emotional way.”

Research has shown that our memories and sense of taste are intimately intertwined; food, therefore, functions as a vessel for experience. A way to entrap memory and yet call it forth again; a pair of soft, warm hands stretching through time.

Think of the foods you have loved throughout your life: a childhood comfort food made by a parent, cheap fast food scarfed down after sports games or an indulgent, intimate date night dish made by a lover as you stand together under the kitchen light, slowly swaying. We love these things not so much for the way they dance across our tongues but the way they bring us back, at least for a moment, to a place that is impossible to return to, yet one we yearn for all the same. Nostalgia, from the Greek word “nostos”: to return home.

For Ego, in the film, ratatouille tastes like his mother’s love, a warm refugee from the angry, cruel world outside. Had I made it alone, ratatouille would taste, perhaps, like disappointment, loneliness, mismatched expectations and too many dishes to do. But here is what it tastes like to me:

A day in which the sun is setting already when you arrive. One of your friends brings tomatoes grown from their backyard garden. You cook together in the too-small apartment kitchen, bouncing haphazardly between each others’ orbits, chopping vegetables, charring peppers, dicing herbs. Nothing quite goes to plan. The zucchini is too big. The homegrown tomatoes are too delicate. It doesn’t matter. You eat them straight off the board as they fall apart in your hands, sweet and succulent. You drink too much cheap wine from Trader Joe’s. You talk and laugh about films, about music, about love. This is nourishment. After you put the ratatouille in the oven, you walk to the place where the lips of the beach kiss the ocean and watch the sun set: blue, yellow, orange, pink. After dinner, you sit on the couch outside and pass a cigarette around, health consequences be damned, because this is what being alive is: this moment in time, this smoke and sea mist that float upward toward nothing.

“And yet,” you think. You are broke. Your roommates have piled dirty dishes up in the sink. You have a paper due. You have laundry to do. The rest of your life stretches in front of you in dark, bifurcated paths. And you are searching, always, for something you cannot name, yet fear you may never find. Perhaps it is this.

So. This is how it goes: You drink more. You laugh. You fling off your clothes and run into the ocean. It is warm and salty. You lie on your back and paddle away from the shore. The cliffs above are a mournful static. The universe is a full moon hidden inside your left ventricle. Find yourself where the light catches you. You will never be here again.