As students and locals made their way down Pardall Road on Oct. 18, they encountered several novel traffic demonstrations aimed at bettering accessibility to sustainable methods of transportation. 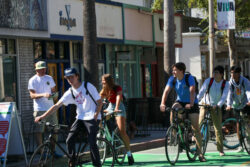 IVCSD selected Pardall Road as the site for the pop-up due to its heavy traffic with the student community. Kayla Li / Daily Nexus

From 9 a.m. to 2 p.m. on the day of the pop-up, the Isla Vista Community Services District (IVCSD) temporarily installed marked crosswalks, scooter corrals, bike boxes and sharrows along the highly-trafficked street.

The street’s overhaul was IVCSD’s first-ever Sustainable Transportation Pop-Up as part of an ongoing project to improve biking, walking, bussing and all other forms of mobility within Isla Vista.

IVCSD selected Pardall Road as the site for the pop-up due to its heavy traffic with the student community. Around 1,000 bicyclists use the street in transit every hour, according to IVCSD Community Engagement Director Sydney Casler.

“We started with Pardall because it really is the busiest in terms of driving, walking and biking, so to be able to gather feedback on each of these different things from people using different modes of transportation [is a great opportunity],” Casler said.

The street is also one of the most dangerous for bicyclists in Santa Barbara County, according to Mobility Plan Outreach Coordinator Fiona Salsich.

A marked crosswalk at the intersection of Embarcadero del Mar and Pardall Road aimed to increase pedestrian safety and “sharrows” — shared lane markings — notified automobile drivers of the likely presence of cyclists and reminded them to share the road.

Casler said the scooter corral — a designated zone for people to park shared electric scooters — is a permanent addition that will remain after the other aspects of the pop-up event are removed.

The two bike boxes, situated at the intersection of Embarcadero del Norte and Pardall Road, provided cyclists with a safe square area, demarcated in green pavement with a white bicycle symbol, to wait for a green signal.

“The goal is to prevent collisions between people in cars turning right and people on bikes going straight by increasing visibility and awareness,” an IVCSD pamphlet stated.

Community members highly recommended the creation of bike lanes in IVCSD’s Isla Vista Mobility Survey, which was conducted through March 2022 and generated over 1,000 individual responses. Despite this community interest, the pop-up event incorporated bike boxes, not bike lanes, into its lineup of test offerings. Salsich said their team ran into logistical difficulties with the implementation of bike lanes for the temporary project.

Salsich also said IVCSD declined to transform the intersection of Pardall Road and Embarcadero del Mar into a four-way stop, another highly requested improvement, due to resource and cost constraints along with liability concerns.

Santa Barbara County, the entity providing approvals for all improvements presented in the pop-up, also did not support the four-way stop as a temporary installation.

“The county said for a pop-up, there’s too much liability because you’re going to have to change the entire flow of traffic. There’s going to have to be someone there directing traffic, implementing a temporary stop sign. It’s really expensive and resource-heavy and a lot of liability problems, so they basically told us that I couldn’t do it,” Salsich said.

Despite the absence of bike lanes and a four-way stop in the Pardall pop-up, Salsich said the two improvements remain in consideration as permanent transportation solutions.

“It’s something that we would like to include in the final mobility plan, but it just wasn’t something we were able to do for a temporary, one-day event,” Salsich said.

Participants were encouraged to fill out a survey providing IVCSD with feedback regarding their experience with the traffic demonstration. All survey respondents were entered to win a $100 gift card prize to shop at the Isla Vista Food Co-op.

The California Air Resources Board awarded IVCSD with a Sustainable Transportation Equity Project (S.T.E.P.) grant of $182,158 in November 2020 to develop a Community Mobility Plan — an initiative to develop and implement equity-based, sustainable transportation solutions.

Of that funding, $9,400 was allocated to holding pop-up installations. Casler said IVCSD will have at least one more pop-up event, tentatively located near Estero Park and around the intersection of Camino Corto and Abrego Road. Casler said that while the Pardall pop-up primarily addressed student concerns around transportation, the second pop-up event will feature improvements more geared toward families in I.V.

“There is a bus stop right there at the corner of Abrego and Camino Corto and then a crosswalk, which a lot of families use to take their kids to school,” Casler said. “We’re hoping to do a pop-up flashing crosswalk there and then a pop-up for bus improvements.”

The bus improvements may include changes to the bus route, bus frequency and bike parking around bus stops, according to Casler.

“We’re really excited to see what the final draft is, and we’re hoping to get a lot of feedback and accurately depict everyone’s concerns and wants,” Salsich said. “That’s my main goal is to make sure that I’m a spokesperson for what everyone wants and trying to find a medium, because lots of different groups want entirely separate things, so [we’re] trying to accurately depict that and make sure everyone’s voice is heard.”