The UC Santa Barbara women’s and men’s swimming teams kicked off their season against the California Polytechnic State University Mustangs on Oct. 8. Each team started out the season on the right foot and was able to sweep the Mustangs on the day of the meet, putting up a combined score of 378-204. 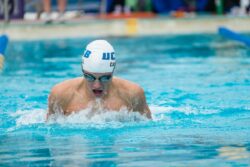 Freshman Hazel Derr put up an impressive performance, finishing second in the 100-yard backstroke and first in the 200-yard backstroke. Freshman Samantha Banos nearly beat out her teammate, sophomore Tyryn Empremsilapa in the 100-yard butterfly, but blew away the competition in the 200-yard butterfly, leading the second-place competitor by seven seconds.

The relay teams performed well as the 400-yard freestyle relay ended with the Gauchos taking the top two spots. The 200-yard medley relay saw the same success for the Gauchos as the women swept the top three positions.

The men picked up right where the women left off, sweeping a majority of the podiums. Of the 12 events featuring the Gaucho men, they were able to sweep the podium in eight of the events.

The 100-yard butterfly featured two Gauchos atop the podium as sophomore Justin Wong and senior Dominic Falcon tied with a time of 49.65.

In the 200-yard medley relay, the Gauchos performed excellently, posting top three with their A, B and C teams.

This meet was a promising sign for the Gauchos as they swept the Mustangs in their 2021 season. Falcon and Cullen picked up where they began last season, taking victories against the Mustangs in each of the last two seasons.

The team of Sparrow, Driscoll, Wong and junior Sean Gutowski finished with a time of 3:03.26 in the 400-yard freestyle, besting the Mustang’s A team by 05:40 seconds. This was one of the top performances for the Gauchos, off of the national 2021 NCAA winner by 13 seconds.

The Gauchos hope to build off this performance in the California State University Bakersfield Roadrunner Sprint Invitational, beginning Oct. 14 and ending Oct. 15.