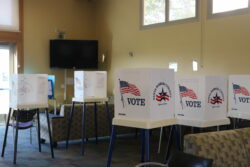 I.V. Community Services District (IVCSD) will have three open seats: one two-year position and two four-year positions. IVCSD Director Catherine Flaherty, who holds a two-year seat, was elected in 2020 and will vacate her seat at the end of her term. UCSB student Olivia Craig and engineer Henry Sarria are running to fill the position.

IVCSD Director Ethan Bertrand will join the Goleta Union School District board in December after no other candidates sought the position in the November election. His term with IVCSD is set to expire in 2024.

IVCSD Directors Spencer Brandt and Jay Freeman both have their seats up for reelection and are running as incumbents alongside candidate Julia Barbosa. Of the three candidates, the two with the most votes will be elected.

I.V. Recreation and Park District (IVRPD) directors Julia Barbosa and Mia Rahman are stepping down from their positions at the end of their term, opening up two four-year seats for the 2022 election.

Four I.V. residents have entered the running: Scott Ball, Thea Neushul, Heidi Diaz and Brendan Hutchinson. Ball, a UC Santa Barbara alum, listed his occupation as an engineer and legal consultant, and Neushul is a current UCSB student. Diaz — who works as a substitute teacher — and Hutchinson are both involved with local community organizing.

Other local, countywide and national elections will also take place on Nov. 8, including representatives for Congress, California state assembly and California governor.

Governor Gavin Newsom is running against Republican challenger Brian Dahle; D-24 Congressman Salud Carbajal is running for reelection against Brad Allen, a registered Republican with a stated profession as a pediatric heart surgeon.