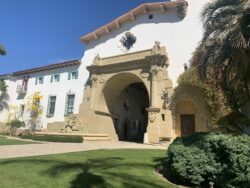 Peyton Joseph McDonald, a 19-year-old resident of Santa Barbara, was initially arrested on Sept. 9, 2021, in relation to a sexual assault that occurred on UC Santa Barbara campus property on Aug. 27, 2021.

The Santa Barbara County District Attorney’s Office then charged McDonald with four felony counts: one count of rape by force or fear, two counts of forcible oral copulation, and one count of assault with force likely to produce great bodily injury.

McDonald’s parents posted his bail that was filed on Oct. 5, 2021, according to Deputy DA Lauren Franco, who prosecuted the case. McDonald pleaded not guilty to all counts at his arraignment on March 2.

The court remanded McDonald into custody at his final hearing on Sept. 26, when he received his sentencing. McDonald also received a stay away order from Jane Doe, the victim using a false name for court records.

“These cases are extremely difficult,” Franco said in a statement to the Nexus. “In this case, Jane Doe took the stand and she was very brave in telling her story.”

Judge Hill ordered McDonald to serve 90 days in custody at the Santa Barbara County Jail with no custody alternatives and no early release, after which he will be released and serve a one-year probation term, according to Franco.

The court has ordered McDonald to complete 100 hours of community service, take a sexual education class and obey all laws for the duration of his probation.

According to Franco, McDonald is not required to register as a sex offender, as the judge declined her request to impose his registration during his probationary term. McDonald also may not carry a firearm during probation.

Executive Director of Public Affairs and Communications at Santa Barbara City College (SBCC) Martha Swanson told the Nexus that McDonald was a student at SBCC in Fall 2021. Swanson said that McDonald is not currently enrolled at SBCC.

Is this for real? Someone is raped and the rapist gets 90 days in jail and DOES NOT NEED TO REGISTER AS A SEX OFFENDER? Have we forgotten about Brock Turner? Judge Brian Hill should not be practicing law.

Read the conviction… simple battery, not sexual, no need to register…Judge Brian Hill has to follow the law, you can’t make someone register as a sex offender if the were only convicted of simple battery… If he did then the defendant could probably sue due to his civil liberties being infringed because of cruel and unusual punishment and it was a jury trial. The accusers do lie a lot sometimes and DA Dudley likes to get on her high horse and try and tack on as much as possible for these types of cases fyi.

A lot sometimes? You don’t believe your own words — such lying does happen but is rare.

Take a civics class. It’s the fault of the jury, not the judge.