The UC Santa Barbara women’s volleyball team had two excellent league games to open up their season. The team pulled off 2 victories against UC San Diego and UC Irvine, each with a score of 3-2. 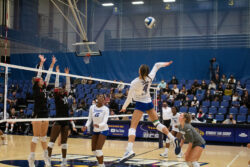 During the Gauchos’ first match, they were in a back-and-forth affair with the UCSD Tritons. After the Gauchos took the first set 25-20, the following sets alternated between the teams.

On the stats sheet, some Gauchos put together career games, such as senior middle blocker Deni Wilson who was a force at the net, matching her season-high, 9-block match. A standout performance was put together by junior outside hitter Michelle Ohwobete, notching a double-double with 14 kills and 13 digs.

Junior libero Macall Peed and senior setter Mehana Ma’a each set their career-high marks during this match, with Peed accomplishing 30 digs along with 32 assists from Ma’a. In the double-digit ranks, the Gauchos’ junior right side Tasia Farmer added to the bunch of superb performers with 11 kills.

In the second conference match of the year, the Gauchos overcame a significant deficit — down 0-2 —, rallying and pulling off the reverse 3-2 sweep of UCI.

The first and second sets of the match were fluid, having 11 lead changes in the first set and both sets ended with the Anteaters going on late runs to close.

In the third set, the Gauchos were able to hold the Anteaters to a .098 kill percentage, showcasing their defense. This momentum carried over into the fourth set as the Gauchos had a .364 hitting percentage as opposed to UCI’s .083 percentage.

Ohwobete stayed hot as she doubled down with another double-double, putting together a stats line of 14 kills, 10 digs and 6 blocks. Senior right-side hitter Tallulah Froley was another standout performer on the offensive side, tying her career-high of 18 kills.

During the evening, the Gauchos dominated in every facet, outpacing the Anteaters in hitting percentage, blocks, digs and aces.

These were key games for the Gauchos as they took two away victories against conference opponents before their next match against rival California Polytechnic State University, San Luis Obispo.

The match will take place this Friday at 7:30 p.m. in the Gauchos’ homecourt, the Thunderdome.