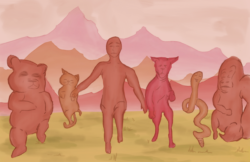 When I first heard that Pixar would release a new film centered around a 13-year-old Chinese-Canadian girl, I thought it would be a win for Asian representation in the media.

I must admit, it was difficult to shield my disappointment after discovering that, once again, the POC (protagonist of color, as I like to call it) turns into another nonhuman entity for a significant portion of their screen time. Why is Hollywood obsessed with turning people of color into animals?

We should celebrate “Turning Red.” Directed by female Asian director Domee Shi, who is well known for her direction on the allegorical short film “Bao,” this movie stands out as Pixar’s first full-length feature film with an Asian protagonist.

The addition of Asian-centered world building in animated films over the past couple of decades is encouraging. Yet, I hesitate when celebrating these milestones. These victories should have happened long ago — so why has it taken so long?

Those who work tirelessly to bring these characters to life deserve their recognition. The presence of representation for marginalized communities in these films is a sign of progress. The fact that this progress even exists — rather than the representation being the norm — is, however, inherently a result of obstacles in Hollywood fueled by perpetuated stereotypes. Films like “Turning Red” are crucial for Asian representation, but their success falters when the films follow the consistent pattern of reliance on painting Asian individuals, and other individuals of the BIPOC community for that matter, as something other than 100% human.

Immediately, “The Princess and the Frog” comes to mind. The first Black Disney princess was a frog longer than a princess in her own movie, “stripped of her human qualities and made to hop around as a frog before younger viewers and their parents, some of whom were seeing themselves represented as a Disney princess for the first time.” Kuzco, from “The Emperor’s New Groove,” and Kenai, from “Brother Bear,” are two other examples of characters who have fallen to the same fate: The former Incan emperor becomes an alpaca, and the latter Inuit boy becomes a bear. More recently, Pixar’s “Soul,” which features a jazz pianist who finds himself in the afterlife, repeats this pattern when the Black protagonist turns into a therapy cat for a portion of the film.

Someone pointed out to me the possibility that these animation studios value the charm and lighthearted nature of having talking animals. Beyond protagonists, kids animated movies have a history of including animal side characters: Pascal, the chameleon in “Tangled”; Sebastian and Flounder, the sea creatures in “The Little Mermaid”; and Gus and Jaq, the mice in “Cinderella.” Even “Brave” follows the same tragic transformation of human to animal when Merida’s mother turns into a bear.

Don’t get me wrong; I love a good Gary Oldman-peacock villain — especially one who laments the number of times he has to “kill the same stinking panda.” As humorous as the lines are, though, sometimes I want to hear it delivered from a human, not a peacock.

“Turning Red” boasts a predominantly Asian cast and crew. One thing the film does right is defer to lived experiences as reference for story building. Although some reviewers have critiqued that it’s too unrelatable and narrow due to the protagonist being a 13-year-old girl, “the whole point of cinema is to transport you into the head of someone you’ve never met and teach you something about yourself in the process.”

One young film critic applauds “Turning Red” for its portrayal of the awkwardness and “uncontrollable chaos” that comes with puberty through the lens of a Chinese-Canadian teenager.

That being said, life imitates art — or maybe art imitates life. Either way, Oscar Wilde is sure to agree that representation has power. Our perception of our lives and the world we live in is tied to the art we create. What we see on screen can effect change in the way we view Asian communities in real life.

Our perception of our lives and the world we live in is tied to the art we create.

Is making people of color a part of the infamous Pixar tradition of animalizing its protagonists supposed to be inclusive? It hits harder when the Asian community already struggles with racist insults and hate crimes on a frequent basis. There is no need to continue the constant connection of Asian and other BIPOC characters to animals.

We have come a long way in terms of Asian representation in the media, but we must keep going. If we don’t, we risk staying stagnant at a stage where a negative message is being sent to young and old Asian viewers alike. And frankly, it’s a dehumanizing one.

Zoë Lo has a bone to pick with Hollywood but sends much love to Asian creators working hard to make representation a reality.