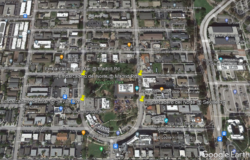 The Isla Vista Community Services District unanimously approved a letter of support for the Santa Barbara County grant application to install flashing crosswalks at four intersections in Isla Vista at its Sept. 13 board meeting.

“This project will improve safety and accessibility for students and families traveling to and from downtown Isla Vista. Additionally, the project is adjacent to public parks, coastal access points, businesses, government services, and educational facilities,” Isla Vista Community Services District (IVCSD) President and Director Spencer Brandt said in the letter.

The letter cited the Mobility Plan survey conducted by the IVCSD as evidence for the need for safety upgrades at the designated street intersections.

“During the IVCSD’s annual public input survey and recent Mobility Plan survey (with over 1,000 responses), residents have consistently voiced concerns about the danger of this area due to the lack of a protected pedestrian path,” the letter continued.

“Isla Vista has the highest rate of zero-vehicle households in Santa Barbara County. Walking, cycling, and skateboarding are popular modes of transportation for all ages in our community. This project will significantly improve routes for a large number of existing pedestrians,” the letter stated.

At the Sept. 13 meeting, the board directors discussed whether the RRFB should be installed closer to Trigo Road, near the I.V. Community Center and I.V. Theater. Brandt referenced the State of California database on vehicular and pedestrian accidents, saying that the intersections of Embarcadero del Mar and Embarcadero del Norte with Trigo Road present a greater hazard.

“It does show that there is a high concentration of accidents in this area and higher than what you would see in the other intersection that they might be proposing to put [the RRFB],” Brandt said.

why not just put in stop signs and regular cross walks? cheaper and you have some assurance the car will top. there should be stop signs at every one of those intersections.