This 2022 Major League Baseball all-star game is taking place at Dodger Stadium on July 19. With the starters and reserves set, let’s take a look at the notable all stars. 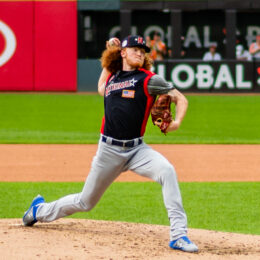 The American league features a star-studded starting lineup with two homegrown outfielders from the New York Yankees, outfielders Giancarlo Stanton and Aaron Judge – both former members of the Bronx Bombers AA team. The Toronto Blue Jays sent two of their players, slugger Vladimir Guerrero Jr. at first base and first-time All-Star, Alejandro Kirk as catcher,  into the starting lineup. The Los Angeles Angels also have two starters, sending two of the most talented players in MLB history: right-handed pitcher Shohei Ohtani and outfielder Mike Trout. Chicago White Sox’s standout, Tim Anderson will be starting at shortstop and the Red Sox’s Rafael Devers got the nod at third. The last starter for the American League is former MVP Jose Altuve of the Houston Astros at second base.

As for the National League, the Los Angeles Dodgers are the only squad starting two players: Shortstop Trea Turner and outfielder Mookie Betts will take their positions at their home field. Former Dodger Manny Machado will be starting at the hot corner in his return to the all-star game as a San Diego Padre. Another former Dodger will be making his return as San Francisco Giants’ Joc Pederson will be starting in the outfield alongside Ronald Acuna Jr. of the Atlanta Braves. Behind the plate, Willson Contreras of the Chicago Cubs will be the starting catcher, with the reliable Paul Goldschmidt of the St. Louis Cardinals at first base. Philadelphia Phillies’ Bryce Harper received the fan votes for designated hitter, however, he will have to miss the game due to injury. Rounding out the starters for the National League will be up-and-coming star Jazz Chisholm from the Miami Marlins at second base.

Some notable names lie in the reserves as well. Albert Pujols of the Cardinals and Miguel Cabrera of the Detroit Tigers were not voted in, but rather included as legacy nominees. Other star players in the National League like Washington Nationals’ Juan Soto and Cardinals’ Nolan Arenado made it as backups. Some breakout players that made it this season include former No. 1 overall pick Dansby Swanson of the Braves and Cubs former top prospect Ian Happ.

The pitchers on the National League team feature most notably, the legendary Clayton Kershaw of the Dodgers, with many wanting him to be named the starting pitcher for the National League. Other contenders to make the start are Dodgers’ standout Tony “Cat Man” Gonsolin, Marlins’ strikeout machine Sandy Alcantara, or Cy Young winner Corbin Burnes of the Milwaukee Brewers. Some relievers include the flamethrowers Edwin Diaz of the New York Mets and Brewers’ lefty Josh Hader. Two breakout relievers featured in the game this year are David Bednar of the Pittsburgh Pirates and Joe Mantiply of the Arizona Diamondbacks.

As for the American league reserves, Astros’ Yordan Alvarez has the best hitting stats of the pack but will miss the game due to injury. His teammate Kyle Tucker and rookie stud Julio Rodriguez of the Seattle Mariners are featured as the backup outfielders. Cleveland Guardians’ Andres Gimenez and José Ramírez have each produced outstanding hitting seasons, warranting all-star invites. Jose Trevino of the Yankees made his first game as a seasoned veteran, enjoying a nice hitting and defensive breakout as the Yankees platoon catcher.