The Daily Nexus
Nexustentialism
It's satire, stupid.
Chancellor Yang Takes Over-Enrollment Crisis Into His Own Hands
July 16, 2022 at 4:20 pm by Caela Erickson Imbrogno 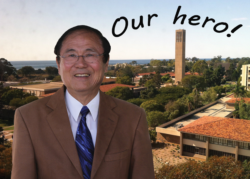 Students of UC Santa Barbara, rejoice! Your prayers have finally been answered, for after years of virtual inaction, our esteemed chancellor has seemingly taken the growing over-enrollment crisis into his own hands. This sudden shift in policy could not have been more timely — as the 2022-23 school year looms ahead, campus student housing and Isla Vista have become ever-more dense. With student population soaring, living conditions deteriorating and housing policy remaining ever-stagnant, it can feel as though calls for action from UCSB administration fall on deaf ears — but no longer!

In a striking and unexpected turn of events, that tireless advocate of student welfare, Chancellor Henry Tzu-Yow Yang, has set out on a quest to reduce our housing burdens, one unsuspecting pedestrian at a time. At 2:30 p.m. on May 16, 2022, Yang allegedly hit a UCSB student with his car before fleeing the scene. So many years of inaction have come and gone; the cause for a livable UCSB and surrounding community had begun to feel nearly lost. But Lo! A shining knight has appeared! His banner bears the UCSB coat of arms; his shield, millions in questionable donations; and his sword, apparently, a Buick LaSabre.

Caela Erickson Imbrogno is a skater boy; she said see you later, boy.