As its 50th anniversary approaches, the Isla Vista Recreation & Park District is planning to celebrate its founding in 1972 with community events and festivities during the month of October. 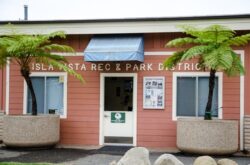 Kiefer said IVRPD hopes to engage and involve the community in the planning of the anniversary celebration. Daily Nexus File Photo

The Isla Vista Recreation & Park District (IVRPD) and community stakeholders generated ideas for the event at the May 12 board meeting — proposal pitches for a costumed bicycle competition, couch racing, pumpkin carving and silent disco, among others.

IVRPD General Manager Kimberly Kiefer opened the discussion by recognizing the occasion’s significance to I.V. and underscoring the mission of the park district.

“We’re turning 50, which is incredible, and I just want to accredit all of the founders of the parks district and the tried and true commitment to preserving open space,” Kiefer said during the board meeting.

The anniversary coincides with Halloween — a holiday that the IVRPD celebrated last year with its first-ever Haunted Pumpkin Patch at Estero Park in collaboration with Lucidity Festival, Isla Vista Community Relations Committee and The Environment Makers.

“Our district was born on Halloween 50 years ago and so we’re really excited to bolster our Halloween effort that we started last year with the Haunted Pumpkin Patch,” Kiefer said. “We, also, are just really proud and wanting to acknowledge our history and heritage of parks, and we recognize that that can be done in many, many, many different ways.”

Park Ranger Paul Izquierdo reflected on the community’s engagement with past Halloween events and said the theme for this year should center around a message of “parks for the people.”

“Last year just really showed how much spirit there is behind Halloween, and so it’s just a great opportunity to lean into that,” Izquierdo said.

Assistant General Manager Luis Valerio pitched for the celebrations to take shape across multiple days of events leading up to the actual anniversary date of Oct. 31. Izquierdo expressed his support for the idea and recommended the top of the Loop in Isla Vista as a prime location for festivities.

“I think a multi-day event would be the way to go for a celebration like this, truly a once-in-a-lifetime opportunity,” Izquierdo said.

IVRPD Chairperson Pegeen Soutar likened her vision for the upcoming anniversary to IVRPD’s 1996 Halloween event, during which they closed the loop off to vehicular traffic and set up a Ferris wheel, carnival games, a haunted forest, Dia de los Muertos altars and music in the Anisq’Oyo’ Park amphitheater.

Soutar also said that the event could educate community members about the history of IVRPD with an “Isla Vista Past, Present, Future” display featuring archival photos depicting the past landscape and development plans. She suggested that Isla Vista residents could enter photo submissions for the proposed display to showcase how people currently use the recreational facilities.

“We’re excited to be in service in some way again and, when the time is appropriate, I’m excited to come to the table with storytelling ideas, performance ideas,” Haas said. “I was also born on Halloween so I have a vested interest in creating something amazing … But, I think for now, I’m just really in listening mode and want to be in service to what all of you and the community want to see.”

Isla Vista Community Services District (IVCSD) director Carrie Topliffe said IVCSD would want to collaborate with IVRPD on their event and act as a sponsor.

“We’re hoping to dedicate something around the $15,000 level to some part of that event,” Topliffe said at the board meeting. “We would love to work with you, and we would love to honor you.”

“Another idea is the possibility for this to be a harm reduction or safe alternative and an opportunity to maybe reach people with education,” Valenti said.

Kiefer said IVRPD hopes to engage and involve the community in the planning of the anniversary celebration.

How nice that unelected, in fact appointed County employee Carrie Topliffe is willing to unilaterally give $15K of our tax dollars to another well-funded special district for a celebration. How would you like it, Ms. Topliffe if some appointed “director” who does not live in your neck of the woods (ie Santa Barbara) started handing out your hard earned tax dollars? You don’t pay the utility tax here in Isla Vista and hence this “funny money” does not matter to you. The “community service district” is an undemocratic boondoggle that nobody knows or cares about. In fact, they are taking… Read more »