The Daily Nexus
News
Isla Vista Recreation and Park District Reflects on Projects, Celebrates its Many Parks
May 18, 2022 at 7:42 pm by Melea Maglalang

Established in 1972, the Isla Vista Recreation and Park District oversees the maintenance of Isla Vista’s park system, which consists of 25 parks and roughly 55 acres of open space. 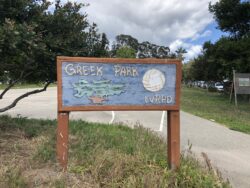 “A lot of these parks are extensions of people’s homes. You see people studying in the parks, laying down reading, having a little get-together and a little picnic with friends,” said Isla Vista Recreation and Park District (IVRPD) Assistant General Manager Luis Valerio. “The district really just wants to provide these safe, fun spaces and environments where people really can escape their homes and still feel like they’re connected with nature and can spark their creativity.”

IVRPD conducted community feedback surveys in 2020 and found an overwhelming local interest in park improvements, according to Valerio.

Following the community’s response, five priority projects were identified, including the Children’s Park and Pardall Gardens renovation projects. IVRPD started looking at opportunities for funding to begin their work.

“Trying to find new avenues of grant funding was really big. So that’s something that I think as a district, we never really did before. So we really just became gung-ho and started applying for grants, and we’ve quickly realized that we’re very fundable with a lot of these grants,” Valerio said.

IVRPD used the California State Parks Community Fact Finder — an online tool that calculates community demographics to evaluate park grant applications — to get an idea of what resources were available for I.V.

“You just drop a pin on where your community is, and it tells you all of the census statistics, and they categorize you as ‘advantaged’ or ‘disadvantaged.’ Isla Vista actually falls under ‘severely disadvantaged,’ the lowest,” Valerio said.

“I think once we finally realized that and said, ‘Hey, well, these opportunities are available.’ That was really the big step,” he continued.

In addition to park improvement projects, IVRPD also worked to organize more recreational events to build a sense of community as students returned for the in-person school year.

“2021, going into the fall, we felt the momentum of, ‘Students are going to come back.’ A lot of students have not been in I.V.,” Valerio said. “How can we make sure we activate the community so that when people come back, there’s things to do?”

In partnership with campus and local organizations, IVRPD hosted a variety of community events at its parks over the past year, such as the Halloween Haunted Pumpkin Patch at Estero Park, “Forward Ever, Backward Never” in honor of Black History Month at Little Acorn Park and the UC Santa Barbara Indus Holi festival at Estero Park.

“The goal was for the student groups themselves on campus to realize that these spaces can be used for very many and for very different types of events,” he said. “We want groups, students, community members to use our parks, and I think with so many people not being here for so long, they have forgotten that aspect of the park system.”

With the large college student presence in the area, IVRPD also faces the unique challenge of establishing a relationship with the community and raising local awareness of its projects given the population’s constant turnover.

“There’s so much turnover in I.V. You can have two really great years of doing community events, and then students graduate, and then the next year, students are not really aware of what’s going on or what happened in the past,” he said. “So, how can we just really establish and kind of become this stabilizing pillar for the community that people can rely on?”

“You have to start somewhere, and sometimes that’s just creating the space or being able to offer something to the community,” she said. “It’s like a ripple in the water, right? It will build by watching something start and then build up from there.”

Kiefer said that, as residents of a college town, students also have the power to shape and create their own space within I.V. and encouraged student involvement with organizing community events.

“We’re seeking more participation from student groups now that UCSB is active again, and we’re hoping that we can build off of some of these concepts and themes into more recurring events that students can come in and participate in and also help shape and create,” she said. “That’s the joy of public service — providing these opportunities for people to also get inspired by us as we’re inspired by them.”

A version of this article appeared in the April 28, 2022 print edition of the Daily Nexus.