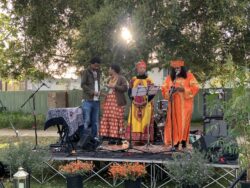 The live music was performed by the Rakhas, a reggae band based in Santa Barbara. Nisha Malley / Daily Nexus

“Our goal in hosting this event was to create a shared community space where people could come together to celebrate Black culture,” Isla Vista Recreation & Park Department (IVRPD) General Manager Kimberly Kiefer said in a press release.

The live music was performed by the Rahkas, “a reggae band based in Santa Barbara that features a female lead vocalist and blends soulful keys with electrifying guitar to create a vast repertoire of original sounds along with fresh spins on classic covers,” according to the press release.

“It is a blessing and an honor to take part [in] a community event that pays homage to history, diversity and culture,” Rahkas’ singer Alla Rahka McKeon stated in the press release. “Through music, the universal language, we show reverence to history and culture, as well as continuing to amplify the messages and rhythms of the people.”

The Rahkas played original songs, as well as songs from classic Black artists such as Nina Simone, Sam Cooke and Bob Marley. McKeon discussed how she hopes the audience feels from the band’s music.

“I hope they feel good, [that] the rhythms and the melodies make them feel something that’s uplifting,” McKeon said.

The Mawusi African drum workshop was led by Sisters, Healing, Inspiring, Nurturing and Empowering (S.H.I.N.E.). S.H.I.N.E. aspires to “secure, preserve and advance the position of African American music, literature and works in the oral tradition to a local, national and international audience,” according to the IVRPD event flyer.

S.H.I.N.E. held its workshop from 3 p.m. to 3:45 p.m. and was followed by Sojourner the Poet & Friends. Sojourner Kincaid Rolle, the 2015-17 Santa Barbara poet laureate, was joined by Rosalyn Y. Collins, Natasha Moore and Jefferson Ndimande.

“I am excited to be a part of this event which celebrates and uplifts Black history,” Rolle said. “Poetry in its essence acknowledges our lived experiences and often is the inspiration for our way forward.”

Rolle performed a reading of her poem, “A Myriad of Subtleties,” which she wrote to honor her heritage and said was inspired by the Zulu parades, which are held annually in New Orleans during Mardi Gras celebrations.

The parades garnered controversy for participants’ use of black and white face paint — designs that have been likened to black face — even when worn by Black leaders and paraders.

For Rolle, the face painting is a “distinctive” expression of Black heritage that she sought to celebrate.

“In the instance of encounter, I am taken for the stranger, the unknown interloper between two worlds. I am the interlocutor, indivisible inextricable. I am the duality — seen and unseen, dark and light,” she said in delivering her poem.

“I am love and hate, the top and the bottom, the ocean and the land, two sides of a mountain, the sun and the moon, the day and the night,” Rolle continued. “I am the diaspora, everywhere all the time, the truth-speaking mouth, the all-seeing eye. I emerge from the hidden quarters claiming my rightful place.”

Rolle then turned the stage over to her colleague and South African-born Ndimande, who grew up surrounded by poetry and Shakespeare because of his father, an English literature teacher.

“Unlike Shakespeare’s poems, that are sort of like a beautiful formula, I think that two lines does make a poem,” Ndimande said to the audience.

He delivered a poem of his own, the title of which roughly translates to “Kings and Queens,” according to Ndimande.

“This is a piece of work that is dedicated to all of you. It captures the essence of your beauty and who we are perhaps as a people, humanity,” Ndimande said.

Next, Moore read her work “Academia is a Trap House,” a song inspired by her elementary school music teacher Ms. Shirley, the only Black educator she had growing up.

“You may have been naively just trying to go to school and get away from home after watching the local police murder Black people day after day, in body and spirit, after watching bootlicking, buck-dancing house negros masquerade themselves as Black leaders and community organizers, after watching police informants and black face leading protests and clearing the way for tanks and military men with their assault rifles pointed right at you,” she narrated from the song.

“After all of that, you’ve run away to Africa, then to graduate school thinking that the distance would give some sense of clarity as to the unspeakable things you witnessed back home,” she continued. “Boy, were you wrong. Because academia is a concentration camp with a Black war, contraband are held in limbo, suspended in both space and time, their demise encoded in the color line.”

The event concluded with a screening of “Black Panther.”

“My hope is that people can walk away knowing that we’re going to have this as an annual event. We welcome people to participate next year and help build upon our Black culture here in Isla Vista,” she said.