The Daily Nexus
News
IVRPD Begins Renovations for Pardall Gardens
February 6, 2022 at 10:00 am by Melea Maglalang

Peaceful Pardall — the name of a renovated model of Pardall Gardens — received the most votes in a survey the Isla Vista Recreation & Park District hosted at the park for the Pardall Gardens Renovation Project. Renovation construction will begin in early-to-mid 2023, and a grand opening has been set for Fall 2023. 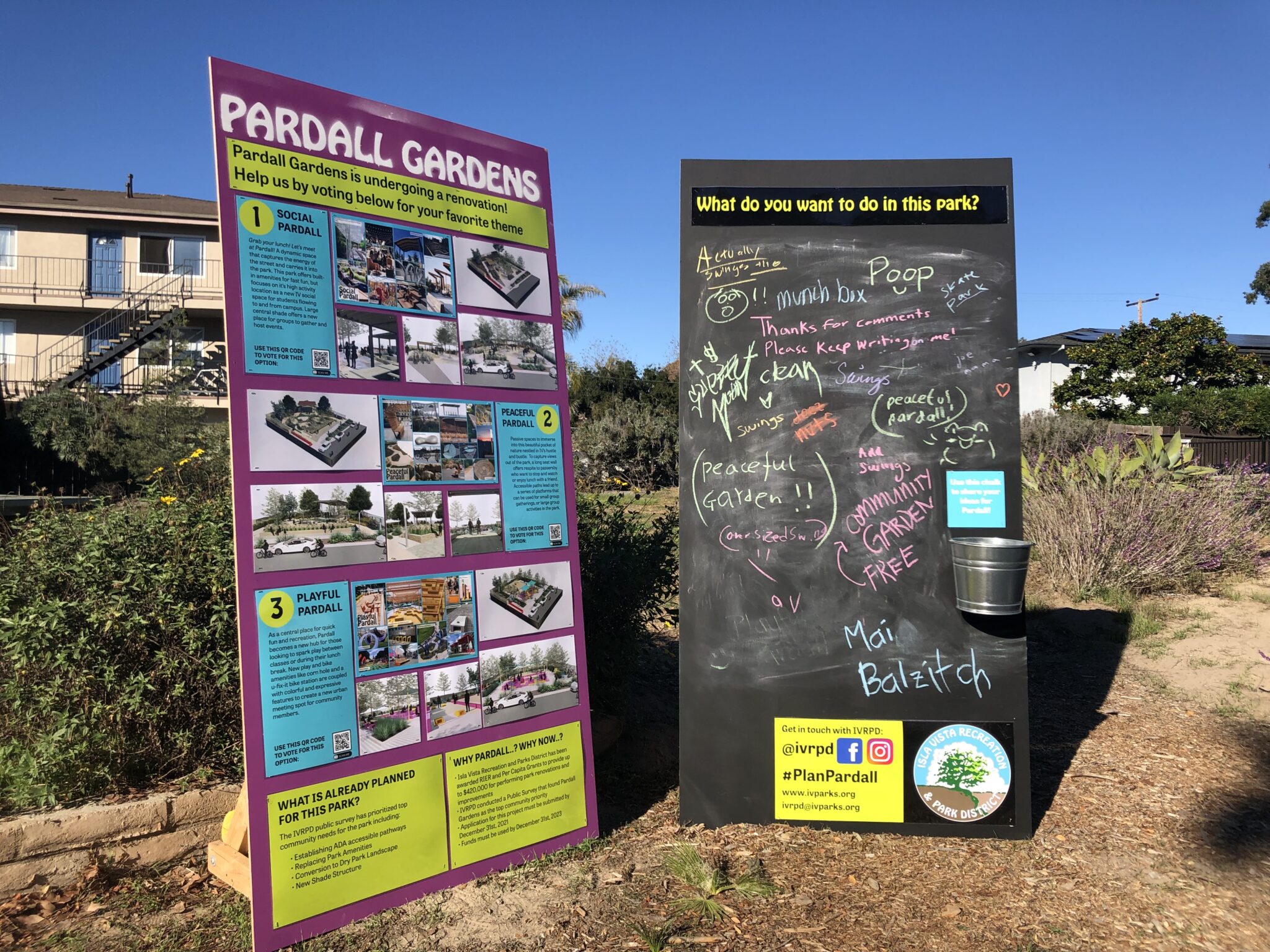 Pardall Gardens was ranked as the top priority site for performing park renovations, according to the “Measure O” survey. Melea Maglalang / Daily Nexus

The Isla Vista Recreation and Parks District (IVRPD) held a community engagement event from Nov. 11 to Nov. 16, inviting members of the community to vote between three potential themes for a reimagined Pardall Gardens: Social, Peaceful or Playful. “Peaceful Pardall” won with 39 votes out of 108.

Pardall Gardens was ranked as the top priority site for performing park renovations, according to the “Measure O” survey, a three-month long survey IVRPD held in mid-2021, due to its lack of amenities, infrastructure and “park identity.” One of the goals of the Peaceful Pardall renovations is to provide an alternative gathering space beyond what the UCSB campus offers.

“We take into consideration all of the comments [from the community]. We heard a lot of people want to see more green shrubbery,” said Luis Valerio, IVRPD Recreation Coordinator. “Pardall does not have any water — that’s why it’s dry. So Peaceful fits [the definition of a] xeriscape, meaning there’s no really major water needed for any of the plants. All of the plants will be drought-tolerant natives, including the trees.”

According to Valerio, the design also aims to incorporate decomposed granite walkways and a central rain catch basin to capture and maintain moisture within the park.

“Whenever we get early morning dew or heavy rainfall, because the park is not irrigated, we want to do our best to capture any moisture and water that we do get and keep it within the park,” he said.

The design will also work to include aspects from the other two themes proposed in the community engagement event, like the barstool seating areas from Social Pardall and “porch-style” swings from Playful Pardall. Valerio said there will be both individual and group seating spaces, more lighting fixtures and a shade structure.

Since becoming IVRPD general manager in 2020, Kimberly Kiefer said she has been working to apply for more grants to improve the parks of I.V.

“The district is trying to take an authentic look at our parks and think, ‘What’s the purpose of this park?’” Kiefer said. “[Pardall Gardens] is one of the most premier parks in Isla Vista, and it’s center to the community and certainly to UCSB. How do we make that an attractive place where people want to come and spend time and meet friends and make new memories or just chill out between classes?”

According to Nick Norman, IVRPD clerk, the Pardall Gardens Renovation Project sets a new tone for hosting interactive engagement events and connecting with the community for future projects.

“I think it’s been a long time since we’ve seen upgrades of this caliber, and of this scale, performed in a public park. There’s been park amenities improved here and there, but this is a really full scale renovation that people deserve,” Norman said.

Norman added that this project “sets a new tone for community engagement.”

“It sets a new tone for the style of community engagement we also want to try to achieve moving forward for future projects, because the methodology of having voting on site, along with QR codes and online surveys helped us reach new audiences and getting people plugged into into the district in ways that previously just weren’t happening before,” he continued.

According to a project information brief provided by IVRPD, the project is expected to cost $521,757, and is funded by three different sources of revenue: California’s Recreational Infrastructure Revenue Enhancement (RIRE) Grant, the Per Capita Grant Program and Measure O.

IVRPD received $250,000 from the RIRE Grant and $177,952 from Per Capita. IVRPD will allocate $93,805 from its Measure O budget — a tax approved by voters to fund capital improvement projects and recreational programming — to support the project.

The grant funds must be used by December 2023, and the overall project completion deadline is March 2024.

“Hopefully in early-to-mid 2023, we’ll begin to break ground. The grant itself requires the project to be completed by December of 2023. We have an estimated opening of Fall 2023, so we should complete the project a couple months before the grant deadline,” he continued.

IVRPD hopes to continue improving parks throughout the community.