The Daily Nexus
Nexustentialism
It's satire, stupid.
Yummy! Tinder Date Actually Cake
May 10, 2022 at 4:20 am by Migraine Mommy 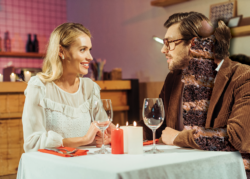 Second-year student Lucy Baker knew that her Tinder date looked too sweet to be real – and she was right. Here is her vulnerable and shocking story.

“At first I swiped right because he looked good enough to eat! Curly brown hair, chocolate-colored eyes and a bright smile. We were talking for a while on the app and he seemed really sweet so we finally agreed to meet up at Woodstock’s.

“When I got to Woodstock’s I saw him sitting at one of the booths in the back. I waved at him but he didn’t wave back. He just kept staring straight ahead and didn’t move a muscle. I figured he was just nervous. But when I got to the booth, he still didn’t move and I knew something was wrong.

“I was like, ‘Tristan? Hello?’ and he just stared straight ahead with his chocolate brown eyes. And then all of a sudden, this bitch in a cupcake apron with a knife came out of nowhere and sliced him down the middle. I almost fainted, but then Skittles spilled out of him and his chest fell away to reveal he was actually cake. Yeah, he was cake.

“Then all of a sudden these camera people came out of nowhere, and the chick with the knife announced to me that her name was Trixie, and that I was on a reality TV show called “Tinder Treats.” Apparently it’s this whole thing where they catfish people on Tinder with a picture of a realistic human cake on the profile, but when you show up they surprise you by revealing it’s not a person. The inspiration was supposed to be from those ‘is it cake?’ Instagram videos where they cut a sneaker or a banana and its cake, except this time it’s a person.

“I don’t know who the fuck thought this was a cute idea, but I’m still in therapy. I have serious trust issues now. And the worst part is, the cake didn’t even taste good. It wasn’t even scrumptious!! It was that really mediocre Ralphs cake. If you are going to give me lasting trauma, it should’ve at least been Gelson’s-level patisserie.

“I was sobbing but Trixie made me eat through my tears. She thought it would make me feel better. But no. The frosting was the consistency of cement, and I think my teeth started writing their wills due to the 100% sugar content. The cake offered no respite either. It had the consistency of a 99 cent store dish sponge. My body started to tremble and my stomach churned upon the second bite. I think my system recognized it as the most mid thing I’ve ever eaten and immediately started to reject it.”

“Bottom line, I would just like to say a big “fuck you” to Trixie at Tinder Treats. I hate you and I will be sending you my therapy bill.”

Migraine Mommy is made out of cake!! Take a bite. Yum yum.