The Daily Nexus
Sign of the Times
Signing Off On Deaf History Month
April 21, 2022 at 9:00 am by Reese Coblentz 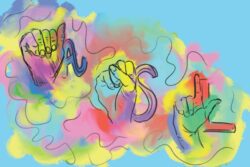 I first want to preface this article by making apparent my identity as a hearing individual. I acknowledge the limitations of my own experiences and also recognize that those in the Deaf and Hard of Hearing community are not obligated to act as spokespeople or educators for their community. Therefore, I want to use this space to celebrate Deaf History Month and offer insight into some of the community’s early achievements and historic milestones.

This topic is incredibly important to me because I studied American Sign Language (ASL) and learned about the Deaf community for three years in high school. Although I am a hearing individual, I intend for those who are hearing as well, or those who may not know much about the Deaf community, to benefit from this article in learning more about Deaf culture and history. I’ve learned how significant this particular community, as well as their language, really is, and I feel it is appropriate to share how and why Deaf History Month should be discussed more frequently.

Deaf History Month honors Deaf culture and the ongoing contributions that Deaf organizations and non-Deaf allies have made to make everyday things accessible to those who are deaf or hard of hearing. The history of the Deaf community is ever-evolving, but I want to highlight the monumental impacts and progress that have positively benefited the Deaf community. As a college student, I am most inspired by the educational aspect of the Deaf community’s history.

The American School for the Deaf was established on April 15, 1817. They are known today as the foundation for accessible education for those who are deaf and hard of hearing. Shortly after, on April 8, 1864, Gallaudet University was founded. These two universities allow for a safe and secure space for deaf and hard of hearing students to learn in an environment suitable for their needs.

Prior to these establishments, deaf students would have been forced to lip-read and speak in school, which would only induce further stress as both lip-reading and producing speech are difficult. As both of these institutions are still in operation today, deaf and hard of hearing students have continuously gained opportunities to obtain college degrees that otherwise would not have been made accessible to them if these kinds of universities did not exist.

However, these universities would not exist today if it hadn’t been for significant figures in the Deaf community, such as Thomas Hopkins Gallaudet and Laurent Clerc.

In the early 1800s, Gallaudet traveled from America to Europe to learn a form of sign language that would help him communicate with his daughter who was deaf. Among his many advisors, Clerc impressed Gallaudet the most with his ability to communicate through sign, so he asked him to travel back to America with him where they would evidently form the world’s first Deaf and Hard of Hearing educational institution, The American School for the Deaf. This monumental achievement later inspired the founding of Gallaudet University, named in honor of Gallaudet and all of his efforts to make the world more accessible to the Deaf community.

Now, I want to address the beautiful form of communication utilized by the Deaf community, American Sign Language (ASL). Approximately 13% of people in the United States ages 12 and older experience hearing loss in both of their ears. With that statistic in mind, ASL is a crucial expression of communication that is invaluable to any individual who experiences hearing loss.

All of these enduring and heroic moments achieved by those in the Deaf community are the essence of what makes Deaf History Month so special. Their history is extensive and ever-evolving.

In today’s society, ASL has been identified as its own formal language by at least 35 states, which means many elementary schools, high schools and colleges recognize ASL as its own unique language and offer classes in ASL as part of their curriculums. As a student who took ASL for three years, I absolutely loved it, as it invites an entirely new perspective to communication and brought me closer to the Deaf community as an ally.

In addition to the educational aspects of Deaf culture, Deaf History Month is also recognized as a space to respect the societal efforts made by those in the Deaf community over time. Those in the community have constantly been working to make all facets of the world accessible to those with hearing loss — such as the availability of ASL interpreters, closed captioning devices in movie theaters, visual alert systems (e.g., flashing lights when someone knocks on a deaf person’s front door or flashing alarms for text and call notifications) and the affordability of hearing aids and cochlear implants. These advanced technologies would not have been made accessible to those in the Deaf community had it not been for their societal efforts and advocation for such things.

On a political level, the Deaf community has had to fight battles concerning equal opportunity in employment, health care, education and many other parts of everyday life. The National Association of the Deaf (NAD) was established to advocate for these civil rights. Over time, the NAD managed to contribute to the development of federal civil rights laws that currently protect the rights to equal access for those who are deaf or hard of hearing.

One of the arguably most monumental occurrences in Deaf history is the Deaf President Now (DPN) protest that occurred in March 1988. Gallaudet University had elected Elisabeth A. Zinser, a hearing woman, as their seventh president, which subsequently angered the deaf and hard of hearing students, who demanded their president be a member of the Deaf community. Uproar amongst frustrated alumni, faculty, staff and students shut down the campus, as many expressed their dissatisfaction with the university’s Board of Trustees’ decision to elect Zinser despite so many wants for a deaf president.

The following were the protesters’ four demands, which came to be addressed as “The Big Four,” as quoted from Gallaudet University’s website:

The protest began on March 6, 1988, and by March 13, 1988, all four of the protesters’ demands had been met: Zinser stepped down and I. King Jordan, a deaf man, was named president of Gallaudet University. If you are interested, Gallaudet University’s website has a breakdown of the entire DPN protest.

All of these enduring and heroic moments achieved by those in the Deaf community are the essence of what makes Deaf History Month so special. Their history is extensive and ever-evolving. Even in today’s world, the Deaf community is still making history. At the 2022 Academy Awards, Troy Kotsur won the Oscar for Best Supporting Actor for his role in the film “CODA,” the first deaf person to ever do so in history. On top of that, “CODA,” which has a predominantly deaf cast in its main character roles, won the Oscar for Best Picture.

The coming-of-age film centers on a mainly deaf family, in which one daughter is hearing and comes across conflict between her dreams to sing and family obligations. It is significant for a film that follows a storyline about the Deaf community to win such an honorable award, as it has never been seen at a prestigious film award show like the Oscars before.