After a scorching start to the season, the UC Santa Barbara women’s water polo team has cooled off as of late. Beginning with their rough month of April, the Gauchos won 3 games but lost 5 games along the way. 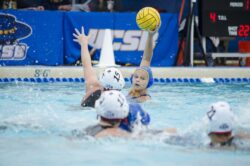 To start the month of February, the Gauchos, ranked No. 16 at the time, lost a tough matchup 4-10 against the No. 1 University of Southern California Trojans in the first match of the Triton Invitational. It didn’t get better for the squad as they took on conference opponent Long Beach State in an out-of-conference matchup, losing to a tune of 8-11.

The Gauchos were able to turn it around shortly, beating Cal State Northridge 17-9 and extending the winning streak to 2 games by beating No. 20 Loyola Marymount University 12-11. Their stretch of wins came to an end during the beginning of the Barbara Kalbus Invitational, losing to their in-conference rival UC Irvine 9-13.

Following the loss to UC Irvine, they bounced back in the tournament by beating the No. 21 San Diego State University in a close 11-10 victory. This would be one of UCSB’s last victories in their recent run of games. They followed up that victory with 2 losses to end the Barbara Kalbus Invitational. The first loss came against No. 9 Arizona State University, in which they were outmatched to an 8-17 result. Then, the Gauchos couldn’t come out on the winning end of an overtime thriller against No. 11 UC San Diego in the final match of the tournament.

Going into conference play, the Gauchos were up against No. 6 UC Irvine, while the Gauchos were ranked No. 16. This game was a one-way affair with Irvine dominating the game, winning 16-8. In the next away-conference game, the Gauchos had another rematch against Cal State Northridge, beating them 10-7. To finish the month of March, the Gauchos were handily defeated by the No. 5University of Hawai’i by a score of 16-5.

April started in a similar fashion for the Gauchos, as they lost a closely contested match to the conference foe, No. 11 Long Beach State 9-14. The Gauchos’ most recent match was another heartbreaker, extending their losing streak in their home finale. The Gauchos lost to the No. 12 UC San Diego 6-10.

The Gauchos have one more regular-season game against UC Davis before beginning the Big West Championships that will be taking place at the Duke Kahanamoku Aquatic Complex in Hawai’i.