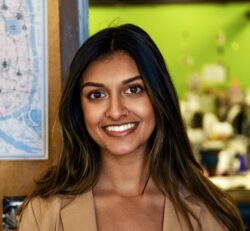 As an On-Campus Senator in the Associated Students (A.S.) Senate for the 2019-20 school year and A.S. Office of the President (ASOP) Chief of Staff this year, the Nexus believes Pabla has the institutional knowledge, experience and interest to adequately serve in the position.

“If I didn’t want this position, I would have quit a long time ago,” Pabla said. “But the amount that I care about giving voice to students and creating resources and advocating for students, that’s never going to change. And I don’t want to give up when I’m right there.”

While the Nexus endorses Pabla, we still hold significant reservations in her capacity to enact real change during her term. Despite her goal to hold university administration accountable to students, she demonstrated little substantive plans to execute such accountability, aside from continuing the status quo of largely preexisting student town halls and surveys.

She also cited recent safety issues that the UCSB and Isla Vista communities have faced and said she aimed to address them by echoing current A.S. President Yuval Cohen’s “responsiveness” to student needs in the face of crisis. Cohen created a task force this year to provide students with A.S. funding to reimburse them for Uber rides from campus after a string of attempted kidnappings in the I.V. area — something that Pabla said she wished to continue.

She advocated for the continuation of current basic needs projects, like the basic needs vending machine that Cohen implemented during her term after several years of ASOP work on the project, as well as new endeavors, like extending the A.S. Food Bank into on-campus residence halls.

“We get the most money from students out of all of the Associated Student Bodies in the UC system. And it’s really important that we’re actually mindful of the fact that students are paying so much into our system,” Pabla said of her commitment to basic needs resources. “These resources are supposed to be for you. They’re supposed to give back to the general public, not just A.S.”

She noted one key aspect of advocacy as standing up for students rights’ regarding the UCSB housing crisis and Munger Hall — the controversial proposal to address student housing needs with an 11-story, windowless dorm building.

“I think it comes down to finding sustainable compromises that actually include things that the students want,” she said. “Obviously, we’re not going to budge on whether or not we want windows for students. That’s not something that I’m going to debate.”

The Nexus found Pabla’s lack of a firm stand on the calls for current UCSB Chancellor Henry T. Yang to resign in the wake of the Munger Hall controversy, despite her emphasis on accountability of administration, indicative of a lack of depth in her advocacy for accountability.

“I mean if he resigned, it would be pretty cool,” she said, noting that although she has “mixed emotions” on the topic of his resignation and that his recent pay raise seemed unfair.

The Nexus has other reservations regarding Pabla’s candidacy, most significant being her inability to produce comprehensive, tangible proposals on new ideas.

Several of Pabla’s platform points — including increasing direct mental health resources of Counseling & Psychological Services and Campus Advocacy, Resources & Education, updating the health and wellness website and addressing the current low quality of campus infrastructure — are self-admittedly either entirely outside the jurisdiction of ASOP or collaborative projects, which both revolve around advocacy and communication.

“It comes down to prioritizing, getting the current resources that exist out there to students, rather than creating more and more resources that just get forgotten about within a few months or a few years,” Pabla said of her platform points.

While Pabla’s commitment to these goals comes from a well-intentioned desire to serve as a “mouthpiece” to students and administration in order to implement public desires and advertise existing services, the Nexus believes that the office also requires a passion for new, innovative actions and plans that she did not express.

Combined with Pabla’s lack of concrete plans to advocate for and implement the student voice, this creates concerns about her ability to meet these goals within her capacity as A.S. president.

The Nexus was also unimpressed by Pabla’s answer to the question of how she would go “beyond the duties of the President as listed in the legal code.”

“Making more of an effort to be extremely connected with my office, know exactly what all of them are doing at all times, know exactly what other executives are doing at all times, like what their offices are doing, who their offices are. Like, who do they consist of?” Pabla said in response. “Being more personable, I feel, is going to be extremely important.”

The Nexus does not believe that strong interpersonal skills or connection with the office and with A.S. go beyond listed legal code duties of the university’s highest student office.

However, Pabla demonstrated a well-formed understanding of the functions and structure of ASOP and the current projects that would carry over into her tenure.

If elected, Pabla said one specific initiative she would take in office is restructuring the A.S. budget to accommodate for the “downhill trajectory” the budget is currently facing after last year’s A.S. honoraria increase.

“I think that that’s ridiculously important, because it is student fees, and we do need to be mindful of what it means to be adequately using student fees,” she said.

Pabla demonstrated interest in continuing several other projects ASOP is currently working on, including expanding composting services on campus, creating biweekly A.S. Food Bank events in Isla Vista, the creation of a transportation committee and the creation of a coalition of marginalized communities.

While the Nexus believes Pabla could work to explicitly expand on and better these ideas — rather than simply continue them — she expressed an understanding of how to tangibly complete and oversee these tasks.

If elected, the Nexus believes that Pabla will be dedicated to the work of the Office of the President and hopes that she will further develop imaginative and engaging initiatives that benefit the student body.

A version of this article appeared on p. 6 & 7 of the April 14 print edition of the Daily Nexus.