The Daily Nexus
News
“That Was like a Glorified Dayge”: Students Reflect on First Full-Scale Deltopia in Two Years
April 9, 2022 at 5:00 pm by Nisha Malley

UC Santa Barbara students reflected on their participation in Deltopia — the annual unsanctioned party in the streets of Isla Vista that returned this past weekend from April 1-3 after being on a two-year hiatus as a result of the COVID-19 pandemic. 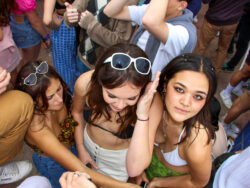 Story, who experienced Deltopia for the first time this year, attended a party on Del Playa Drive with her friends in the Santa Barbara Ski and Snowboard Club and stayed at the same house for the duration of the event.

“It was supposed to start out as a small party, but then just random people came in and it turned into a big party,” she said.

“It wasn’t as crazy as I expected, but I could just be saying that because I stayed in one spot,” Story continued.

Daneiel Yalew, second-year statistics and data science major, celebrated with other UCSB students, friends and relatives who visited from out of town.

“Me and my roommates had some people come over, like cousins and siblings, and we pre-gamed at my place, and we ended up walking around I.V.”

Yalew commented on the surreal feeling of witnessing so many people come together.

“There was no lack of parties,” he said. “It was also not just about partying but seeing the amount of people being together in one place, all those college students, was pretty cool.”

Although Yalew emphasized how much fun he had participating in Deltopia, he also said that it didn’t quite meet his expectations as a first-timer.

“I’ve never seen it [Deltopia] before, but coming out of it, I thought of it as a normal I.V. night with more people and in the day. My expectations were a little higher, for some reason, and most of it was probably because a lot of parties were exclusionary. You needed to know people to get inside,” he said.

Similarly, second-year biology major Alyssa Carlson said she felt that the event did “not” meet her expectations “at all,” harkening back to images from the 2014 Deltopia Riots.

“That [Deltopia 2022] was like a glorified dayge. It was fun in the sense that everyone was partying at once and that was really cool, but I had in mind the pictures from 2014, like the crazy SWAT, the whole streets flooded with people,” she said.

“I heard about some horrible shit going down, like people falling from places, but I was not there for any of that. And it was all like a pretty basic weekend, honestly,” she continued.

Carlson said she spent Deltopia with friends, attending parties on Del Playa and at fraternity houses before returning home. She had initially planned to attend the annual “The Warm Up” concert organized by Associated Students Program Board, featuring Flo Milli and Pi’erre Bourne, but ultimately did not attend.

“I passed out for three hours and then the Flo Milli concert was already going,” Carlson said.

Fourth-year environmental studies major Clarissa Diaz opted out of the larger house parties occurring on Del Playa and instead hosted a small gathering at her home on Saturday for Deltopia.

“I didn’t end up going out [to Del Playa]. I made a little kickback with my friends and we all got drunk, and then went to the pool and we all went swimming in a jacuzzi. It was pretty nice,” she said.

Diaz expressed that she didn’t feel comfortable being around so many strangers and preferred the “intimacy” of being surrounded by just her friends.

“It’s really fun when you’re younger when you’re first experiencing things, but since I’m a fourth-year now, I don’t know, I don’t want to be getting fucked up around a lot of younger people, too. I’d rather just have a more chilled-out vibe,” Diaz said.

Story, who felt somewhat underwhelmed by the turnout for this year’s Deltopia and the exclusionary nature of the partying, expressed her hope for future years.

“I think it would be fun to have a bigger party in the streets. I just thought it was kind of everyone doing their own thing,” she said.

“It was kind of cool seeing UCSB get its party cred back. I feel like the partying at UCSB was going down, and this was like the first resurgence of the old UCSB … I feel like for future ones, maybe a little better weather.”

A version of this article appeared on p. 1 of the April 7 print edition of the Daily Nexus.

Thanks for the feedback, next year we will plan for more burning cars and shit. I think the IVCSD has some room in their budget for that. It’s important that IV lives up to what you’ve seen in videos. That’s what you’re paying for right?