The Daily Nexus
The Daily Stench
Rejoice! UCSB To Lower Tuition
April 1, 2022 at 4:20 am by Sam Franzini 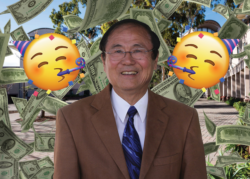 Yang explained his decision to do so in a recent press conference. “I felt it was necessary, desired and the downright moral thing to do,” he said while clutching his chest. “These kids have worked so hard over the pandemic, completing their studies online with absolutely no cheating on closed-note exams. This is the least I could do.”

Second-year Lydia Johnson was pleased with the change. “I’m so glad Yang implemented this change. What with his handling of in-person masking, the housing crisis and the recent kidnappings, it really shows his commitment to tackling problems, albeit one at a time,” she said. During the interview, Johnson kept jumping up and down and screaming, “Yippee!!!!!!”

Yang is hoping that the recent change will have a positive impact on the campus’s community, saying, “I figured you students need the extra pocket change after the hard year we had. Two thousand bucks can get you, what? A house?” According to a study conducted by the Pew Research Center, 93% of students plan to use Yang’s tuition drop as spending money for alcohol and Adderall. Not wanting to stray too far from their precious chancellor’s advice, though, some students are using their extra $2,000 for half of next month’s rent.

A parade commemorating The Great Tuition Lowering of 2022 and Yang’s legacy and life will march through the Arbor on Friday, April 1. There will be floats of Yang and Michael Drake’s heads, and popcorn and cotton candy selling for only $12.50. Extravaganza Warm Up rapper Flo Milli will fly in two days early to perform at the event.

Krista Silver, the organizer of the event, is hoping it will bring publicity to Yang’s achievements. “Before he lowered tuition on this great day, we thought he was a lazy, asshole loser who couldn’t care less how his students were feeling. But now?” Here, Silver gazed wistfully into the distance and tears welled back up in her eyes. “He’s alright. He really does care about us.”

Several students have decided to pool their extra $2,000 into a Yang Appreciation Pool. He’ll be presented with the check — the donation pile of which currently sits at $148,000 — at the parade, where he’ll don a crown, scepter and sash displaying “Best Chancellor Ever.” He will then be carried into Isla Vista, where the grateful and simple townsfolk will throw roses, cash or other precious items at Yang, Savior of Economic Prosperity, Mental Health and Champion of All Things Good and Fair in the University of California System.

One can only hope to possess half of the generosity that Yang has displayed with this decision.

Sam Franzini knows poking fun at Yang is a cheap shot, but it’s not like it’s unwarranted.