The Daily Nexus
Sign of the Times
A Personal Crisis Across the World: Ukraine’s Fight
March 19, 2022 at 2:57 pm by Michelle Shteynberg 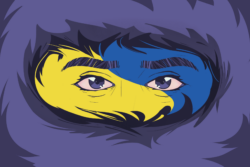 In the last couple of weeks, the media has overflowed with information about a crisis across the world, devastating my culture and my people. This is the first time in my life where I have felt as if the essence of Ukraine is fully a part of me.

With my dad born in Ukraine and my mom born in Russia, my culture and identity are an amalgam of both. Now, I feel like the two parts of my heritage are at war.

As a child born in America, my parents have integrated both their cultures in me, and I have embraced every part of them since I was a young girl. Across the world, I see people who eat the same foods as me, speak the same language as me, and have the same morals as me. But now, these people’s lives are in complete disarray while I go to my chemistry class and eat lunch at Portola.

Similar to us, their lives were simple and unbothered. But within a week, their livelihoods were thrown into chaos on both the Russian and Ukrainian sides of the border.

Right now, Ukrainians are forced to shelter in subway stations as makeshift bomb shelters. They wait in hour-long lines for basic necessities such as bread and water, unable to take more than 100,000 hryvnia, or about $3,339, every day. During this time of war, this amount is alarming for citizens. Over 1.5 million Ukrainians have fled west, towards Poland, Romania and Slovakia. The remaining 40 million residents have stayed, fearing for their lives.

In addition to these difficulties faced by the general public, Black and LGBTQ+ citizens are currently struggling to find shelter or leave the country. In particular, many transgender women are unable to leave the country because their IDs mark them as male, and men are forced to fight for the war under Ukraine’s conscription laws. People that are able to flee to Poland and Hungary will face obstacles as well. Both countries have anti-gay laws and many people are homophobic, with “LGBTQ-free” zones across Poland. Black immigrants (in addition to various other immigrants of color) are also facing hardships in regards to leaving the country, with segregation and racism prevalent at the borders.

Ukrainian cities are being destroyed. We see missiles in apartment complexes, demolished buildings and explosions caused by the conflict. Families are split as civilian men go to the war-front and children have to witness war and death in front of their very own eyes. These are my people and my country. It upsets me to see this happen to something that is so close to my heart.

Kyiv and Kharkiv are two of the largest cities in Ukraine. They have been targeted and surrounded, with a complete disregard for the massive population living there. On March 1, I watched a video where a rocket hit a large administrative building in central Kharkiv, right near residential areas full of people. Although the number of casualties during that attack is unknown, the total current civilian casualty count is at 1,123, with 364 killed and 759 injured. The Office of the UN Commissioner for Human Rights (OHCHR) has stated that these reports are “a considerable underestimate of the true numbers.”

The city of Chernobyl was occupied by the Russian army on February 25. Having suffered the worst nuclear disaster in history in 1986, the area is still extremely dangerous and vulnerable. This poses a threat to not only the citizens of Chernobyl but the entire country of Ukraine as well as all of Europe. The Ukrainian Ministry of Foreign Affairs has warned of another possible ecological disaster as Russian troops entered the “exclusion zone,” which still contains high radiation levels in the area. On March 4, Russia seized Europe’s largest power plant and caused a fire with a substantial amount of bombing. Although the fire was extinguished, it has sparked significant fears amongst leaders and policymakers all across Europe and the rest of the world.

Many people are in danger, unsure of what to do.

There have been a lot of questions about what has been happening between Ukraine and Russia. This conversation goes back as far as 1990, when the USSR split, but more recently in 2014.

Russia and Ukraine’s conflict resurfaced in 2014 when protests caused Russia to take control of and annex Ukraine’s Crimean region following the fleeing of the Ukrainian president at the time. Eventually, Russian citizens and speakers in Crimea, Donetsk and Luhansk declared independence from Ukraine. Since July 2014, the situation in Ukraine has been an international one. France, Germany, Russia and Ukraine unsuccessfully attempted to cease the violence  through the 2015 Minsk Accords. In 2016, NATO stepped in to aid Eastern Europe from possible future Russian aggression. Ukraine has also been the target of cyberattacks from Russia as recently as 2018.

In 2018, Ukrainian lawmakers voted on the termination of the Treaty on Friendship, Cooperation and Partnership, also known as the “Big Treaty.” The deterioration of relations between Ukraine and Russia connects to the issue we see today.

On the day of the initial invasion, February 24, President Vladmir Putin stated that the Western-brokered peace agreement – the Minsk Agreement – no longer existed. After previously denying that he would invade, he declared that Russia did not feel safe because of what he claimed was a threat from Ukraine. He claimed that his goal aimed for the “demilitarization and de-Nazification” of Ukraine.

This is ironic, considering that Putin attacked Ukraine similarly to Germany’s invasion in World War II.

Ukraine is a democracy and is led by President Volodymyr Zelensky, who is Jewish by faith and has lost relatives in the Holocaust. Zelensky has stood by Ukraine in recent days, refusing to flee the capital despite being targeted by the Russian army. He proved that he would stick by the people of Ukraine, and that has provided a great amount of hope for people despite the fear and chaos that has ensued.

Every day, I speak to my parents on the phone. My dad has friends who live in Kyiv, Uman and Odesa, amongst other cities. These are people who I have met before, people who have welcomed me with immense hospitality and positivity. They continually ask about me, send gifts and invite my family and I back to visit them.

A very dear family friend recently went back home to Ukraine. She had a visa to live in America and went back to her family, only to face this conflict firsthand. Keeping in contact with my parents, I found out that her family fled to Poland seeking refuge.

It hurts to know that people with such big hearts are struggling right now.

It upsets me to see cities and to my ancestral home turned into a battleground. Having visited Ukraine in 2016, I was mesmerized by the stunning architecture and the way of life that my parents had always described to me.

We visited Kyiv, the largest city under attack this week. I remember being in awe of “Old” Kyiv (Старый город), seeing beautiful hundred-year-old churches and colorful buildings. The streets were filled with people selling scarves and knit clothes, and I remember thinking the snowfall in March was the most magical thing as a kid. My dad and I stayed in “New” Kyiv, the metropolis that we have all seen on the news. This city was similar to one we can imagine: full of skyscrapers, shops and authentic Ukrainian food. But now, it is being shelled and causing people to retreat into the subway tunnels to avoid bombing.

On that same trip, we visited Uman, a small rural city where my dad was born and raised. He and his friends drove me around the city, showing me the high school that they went to, his childhood home and the graveyard in which my great-grandparents lie. He took me to his favorite restaurants, which had amazing food, and introduced me to his first schoolteacher. It was an experience that I will forever hold close to my heart and I cannot wait to go back.

There was a scenic park, a stunning area known as Sofiyivka Park. My mom has very endearing memories of it. She would tell me stories of her taking my brother on walks when he was a toddler. In the spring, they would pick apples from the trees and collect the flowers to take home. In the winter, she would bundle him up and take him through the snow, through a park that changes and grows with the seasons.

My dad visited the city of Kiev, Odessa and Uman eight months ago. When he got back, he was so excited to show my family and I pictures and videos of how beautiful it is in the summer. We watched a slideshow of all of the pictures he took on his trip and I could see how much my dad loved his home.

Places like these in Ukraine connect the people to their country, connect them to their memories of where they live. This makes Ukrainians proud of who they are and where they are from, and I am one of those people.

This makes the sight of war in Ukraine so much more tragic. Lives have been disrupted, and there was nothing anyone could’ve done.

I feel like it is necessary to mention that most Russians are not supportive of this war. I think that it is very important to know, be aware of, and separate the people from its leaders.

Anti-war protests have erupted in over 50 cities in Russia. Over 5,000 people have been detained. People chanted “No to war!” and stated that they wanted nothing to do with this war. In addition to unwanted violence, sanctions against Russia will affect all of its citizens, most of whose voices are underrepresented in Russia’s parliament.

It is unsure how far Putin will go to get what he wants. However, hundreds have died and hundreds of thousands of people have been displaced in just over a week. Russia is a major power, and the rest of Europe fears what Putin has in store. He has ordered the Russian nuclear deterrent to be put on high alert and stated that he will retaliate in ways no one has ever seen before.

Meanwhile, what can we, as college students and as normal people in America, do?

For one, we have to stay informed. Try keeping up with the news and find valid, reputable sources to find your information.

Check in with your Ukrainian and Russian friends. Even if it may not look like it, it may affect them in more ways than one.

Spread awareness. If you have the means to, donate to responses, fundraisers and GoFundMes. For instance, Care.org, Red Cross or United Help Ukraine. Sometimes even a simple search can lead you to many sources.