The Daily Nexus
News
Chancellor Yang Is the Second-Longest-Serving Chancellor in UC System
March 4, 2022 at 10:36 am by Atmika Iyer 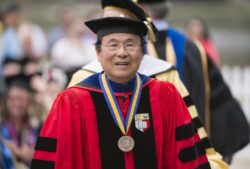 Yang has been UC Santa Barbara’s chancellor since 1994, making this his 28th year in office. His tenure only is behind former UCLA Chancellor Charles Young, who was chancellor for 29 years from 1968 to 1997. Yang, who is 81 years old, told the Nexus he has no plans to retire soon.

“I look forward to many years of working with our students, faculty, staff, and alumni, and to continuing our exciting journey together on our high trajectory path to accelerate our campus to unprecedented new heights,” Yang said in a statement to the Nexus.

“My wife, Dilling, and I are deeply devoted to this campus. We love our interactions with our students, faculty, staff, alumni, and supporters – and we are constantly energized and inspired by all the wonderful, creative, and innovative work being carried out here,” Yang said in a statement to the Nexus.

Aside from his duties as chancellor, Yang also teaches and mentors some UCSB students, and received an honorary distinguished teaching award in 2007 from the university’s Academic Senate for his work teaching undergraduate and graduate students.

“It was very meaningful to me to receive an honorary distinguished teaching award from UC Santa Barbara’s Academic Senate several years ago. I taught a 3-credit undergraduate course this past fall, as I do each year, and I am currently supervising two PhD. students, supported by the National Science Foundation and Gates Foundation.”

During his 28-year tenure, Yang has presided over the campus community through the 2001 Isla Vista Massacre, the 2014 Isla Vista Tragedy, the Thomas Fire and several other local tragedies. He’s also led the university through massive growth, both in students and in the campus.

Yang also highlighted several accomplishments during tenure, like when UCSB placed No. 5 in the U.S. News & World Report list of public universities and its designation as the first Association of American Universities school to be named a Hispanic-serving institution.

Yang also noted the rise in applications to the university, the steep increase in the GPAs of applicants and the increased diversity of students admitted during his tenure.

Yang said that it has been “tremendously rewarding” to see the campus rise in “national and international stature” over his tenure as chancellor.

“These achievements, and so many more, are the result of the sustained, collaborative efforts of all of us, including our students,” Yang continued.

During the peak of the housing crisis this fall, many students called for Yang’s resignation in marches and speeches. Yang called the housing crisis unforeseen and said that the university provided solutions for those displaced and doesn’t anticipate a need for additional housing during Spring Quarter 2022.

“The COVID-19 pandemic presented UC Santa Barbara with many unforeseen challenges. Like almost every other UC campus, our students were faced with a challenging off-campus rental market,” Yang stated.

“As the COVID-19 landscape improves, the Housing team has been observing a return to typical patterns with many students having already secured housing for 2022-23,” Yang continued. “The campus plans to be able to accommodate all new freshmen, all new transfer students, and all new graduate students who apply for campus housing. UC Santa Barbara is actively working to add bed spaces to our campus in the future to support our students and their housing needs.”

Yang described his wife Dilling as a source of strength and support and said the pair loves living amongst the campus community.

“Dilling and I especially treasure getting to know our students, living next to our students as our campus neighbors, and interacting with students in countless ways throughout the years,” Yang stated.

“I have deeply appreciated the strength, perseverance, and resilience of our students and all of our campus community members during this challenging pandemic period. We are thrilled to have our students back on campus and in the classrooms,and to see the return of our vibrant campus life,” Yang continued.

Serious question as a long-time staff member: HOW DO WE VOTE HIM OUT?

I cannot believe we still have to keep him around for an unknown amount of years. This campus is suffering from his lack of innovation and ability to modernize. I look at other campuses with newer Chancellor’s and ours feels frozen in time from when he first took office. I wish we all could get raises for failing to carry out our job. I’m sure we’ll get a last minute email about something that pulls the rug from under campus. Yang has got to go.