With finals week coming up, along with the numerous other stressors in our lives, I’m sure many of us may be ready for a good cry. Have you ever stopped to think, though, about why we cry when we’re sad or stressed, and whether there is actually a biological reason behind it? I never had, until I found myself reading about hormones in my biology textbook. 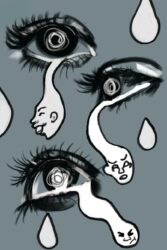 Many species, humans included, use crying as an instinctive response to pain or physical irritation, which, on a basic level, makes intuitive sense — tears are one of the body’s primary lines of defense in blocking contaminants from entering the eyes. Tears contain lysozymes, which are antibacterial enzymes responsible for breaking down pathogens that find their way into the eyes. Tears also lubricate the eyes and protect them from dirt and grit, and anything else that might be harmful to the organism.

Tears, therefore, have a very specific biological function in protecting animals from the outside world. Okay, so hopefully you’re with me so far and all of this makes sense. You may be asking, though, “When I look at the chemistry homework I haven’t started yet that’s due at midnight, there’s no physical assailant involved, so why do I find myself shedding tears?”

Tears, in response to highly emotional and stressful situations, remain a mystery to the scientific world. Even Charles Darwin once described emotional tears as “purposeless,” and honestly, can we blame him? There is no obvious explanation for why we secrete protein-rich liquid from our eye sockets any time we feel strong emotions. People have been trying to come up with an answer to this pesky question for centuries, and current theories range from crying as a social signal of an inability to cope and a request for help to it being a response to our brain sensing a stimulus overload. There have even been studies that found that crying elicits more empathy and less aggression from the people we interact with.

To make matters even more complicated, we also cry when we’re happy! Talk about having issues … Anyway, because tears contain “leucine enkephalin,” neurotransmitters which act as natural painkillers, “tears of joy” as they’re often fondly referred to, can also contribute to a feeling of post-cry relief. Scientists believe that we cry in times of extreme happiness, such as at weddings or when we see a cute baby, because, just as tears in times of sadness make us feel a bit better, tears can intensify feelings of happiness. Another possible reason for tears of joy is that sometimes the amygdala, the center of emotional processing in the brain, confuses feelings of joy with those of pain or sadness. When these emotions get mixed up, the body stimulates the production of tears to help you calm down from whatever trauma it thinks you’re experiencing.

So, what actually happens in the body when you watch that sad movie or see your significant other walking down the aisle? The first thing is that the amygdala sends a signal to the hypothalamus, which in turn activates the autonomic nervous system. The autonomic nervous system is responsible for unconscious responses to stimuli, such as heart rate, respiratory rate and digestion. There are a few more intermediate steps, but basically, all of this stimulates your sympathetic nervous system (or the “fight or flight” response) and results in the release of acetylcholine, a chemical messenger which is then sent to glands in your eye sockets, inducing the production of — yeah, you guessed it — tears!

Scientists have actually discovered that the chemical makeup of emotional tears is different from the makeup of “normal” tears, and contains many more proteins than the tears that we shed in response to pain or bacterial invaders. Some of them even hypothesize that this may be a part of the reason that we often feel better after we have a good sob sesh, while others claim that there is no substantive evidence for crying having any measurable effect on mood.

This brings us to another point that scientists are trying to figure out: What about people who just don’t cry? Well, we don’t really know yet. Ongoing studies, though, are being dedicated to discovering whether those people have significant neurological differences and social patterns than people who cry on a regular basis.

It may not matter much to you when you are sobbing down at Campus Point, reaching for the tissues at your best friend’s wedding or even texting someone a tear-face emoji, but the simple act of crying is the source of much mystery in the scientific community, and undoubtedly will remain the center of significant research going forward.