The University of California is an internationally recognized educational system. The UC system boasts 10 universities in total, many of which are among the finest public institutions in the United States. Unfortunately, the same cannot be said for many of their mascots. What is a mascot, anyway? The Merriam-Webster dictionary defines a mascot as “a person, animal, or object adopted by a group as a symbolic figure especially to bring them good luck.” Mascots have a strong tie to the concept of luck, as the word itself originated from “mascotte,” French for “lucky charm.” Soon enough, sports organizations began to implement mascots to liven up games. In a collegiate setting, mascots can incite school spirit among students at games.

This is my personal ranking of the UC Mascots, and (spoiler alert!) it’s not going to be very nice. 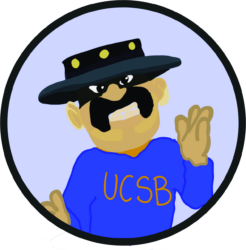 There are so many things wrong that I don’t even know where to begin. Olé looks straight up creepy — there’s simply no getting around it. His eyes look like he’s been unwaveringly plotting my demise for the past 15 years, and now’s his chance to execute his evil master plan. I honestly feel ashamed for poking fun at other mascots when my school’s mascot has no distinguishable difference from the evil character in a Disney movie.

Olé, or the Gaucho, was adopted as UCSB’s mascot due to Douglas Fairbanks’ performance in “The Gaucho,” a 1927 film. There have actually been rising concerns that Olé as our mascot is a form of cultural appropriation, since a gaucho is an Argentinian cowboy and Olé sports a comically exaggerated mustache, mask and sombrero. Many have advocated for changing the mascot to a raccoon or “mapache,” but this has also presented itself to be an issue, as it has racist connotations as well.

In summation, because of the culturally insensitive nature of Olé’s design — paired with the fact that I would not remotely consider being within 5 feet of him — Olé is in last place at No. 10. 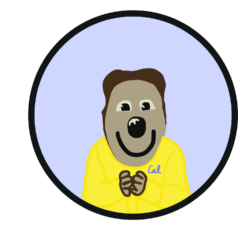 It’s a bear, and it won’t be the last you see on this list. The UC campuses seem to take a liking to the bear-mascot combination, most likely due to the California state animal — a grizzly bear. Oski the bear was actually named after the “Oski Yell,” a chant that students would yell at Cal football games in the early 20th century, when there were live bear cubs instead of an actual mascot. Thus, Oski was born.

While I do agree with the consensus that Oski the bear is a much better alternative to running the risk of having live bear cubs roaming around at football games, that’s the only thing about Oski that I can really appreciate. I have so many questions. Why is his smile so narrow? Why are his ears not fully formed? Why are his eyes telling me that he’s going to break into my dorm room and murder me while I’m sleeping? Whenever I show a friend a picture of Oski the bear, there seems to be a general consensus that he looks like a serial killer who’s hit his breaking point. For these extremely valid reasons, Oski is firmly at No. 9.

Yeah, they don’t really have a mascot. I mean, if you google “UCSF mascot,” you get this super sad-looking (unnamed) bear that doesn’t even really count. UCSF is a top graduate school for health, and it deserves a legitimate mascot.

Until then, I give it an 8, because even though UCSF doesn’t have an official mascot, it’s still better than the other options (I’m looking at you, Olé and Oski). 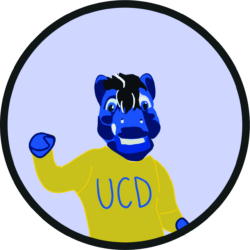 Admittedly, before writing this article, I thought that UC Davis’ mascot was an Aggie. I had no idea what an Aggie was, but I simply assumed it was shorthand for the name of an obscure farm animal. It has since been revealed to me that “Aggie” is short for “agricultural.” I might also have expected a cow, as many refer to Davis as “cow town.” So, color me shocked to discover that UC Davis’ mascot is not an Aggie or a cow, but instead an electric-blue mustang.

I can appreciate how they took the time to coordinate Gunrock’s skin and eye colors, all while matching his just-as-bright jersey. It’s just — his eyes have something about them, a glimmer of craziness and a hint of exhaustion. Perhaps he’s reeling from multiple all-nighters with the assistance of a triple shot espresso. Maybe he even added a yerba mate. I mean, I’m not necessarily shaming him for it. Most college students can probably relate to Gunrock in all his caffeinated glory. Especially Davis pre-med students.

It’s just the choice of a mustang that confuses me. Also, he does not look like he’s OK in any capacity. Sorry, Gunrock, you’re going to have to be No. 7. If you want to see more of Gunrock, I recommend watching the parody of Gangnam Style, entitled “Gunrock Style.” 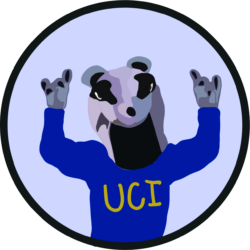 Zot zot zot! Do anteaters actually say that? The anteater mascot was originally inspired by one of Johnny Hart’s comic strips and was eventually elected by the UC Irvine student body in 1965. Apparently, there was a bit of controversy involving the decision to use an anteater, as some believed it to be undignified. However, Peter managed to persevere through it all and lived to fight another day.

I’m not completely sure what exactly UC Irvine has to do with anteaters, but I can get on board with it. Peter appears to be well adjusted. He could go to bed at a reasonable hour. Is 95% of his biological makeup boba? Yes, and what about it? He can still handle himself.

Peter’s unassuming, despite being one of the more unconventional mascots. He’s alright. I give him a 6. 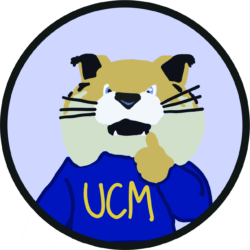 Five years prior to its opening in 2005, UC Merced held a mascot-naming competition for elementary school students around the area to participate in. They ultimately decided on a bobcat, as they frequented the campus. The addition of the word “Golden” was just for some flair. So we’ve got the Golden Bobcats. The original mascot was named “Boomer,” but it was changed to “Rufus” in 2011. This is slightly confusing, as Rufus the Bobcat is also the exact name of Ohio University’s mascot.

The choice of the bobcat makes sense for UC Merced, and its mascot is definitely unique among the UC mascots as a whole. Considering that UC Merced is a relatively new school, Rufus the Bobcat is a decently good mascot.

Rufus gives me the impression that he’s one of those people who looks intimidating without trying to be, but really has a heart of gold. Like a proud soccer dad, Rufus is shooting us the thumbs-up, letting everyone know that he’s here for us whenever we need him.

Overall, Rufus is pretty cool. No. 5. 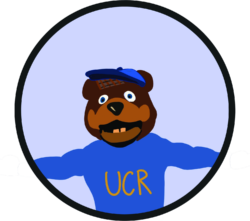 Lo and behold, another bear! The concept of a “Highlander” as UC Riverside’s mascot was introduced by Donna Lewis in the mid-1950s, around when the school first opened. Behind the campus, the Box Spring Mountains — or the Highlands — stand tall. And, even more fitting, UC Riverside is at the highest elevation of all the UC campuses. The Scottish theme of the mascot was implemented because the buildings were named after Scottish regions.

Scotty Highlander does have the crazy eyes that I condemned Gunrock for, but the Scottish theme is really interesting. While Scotty is a bear like many of the other UC mascots, he has something distinguishable about him, something notable: his Scottish descent. I find that admirable. Scotty, take fourth place. You deserve it. 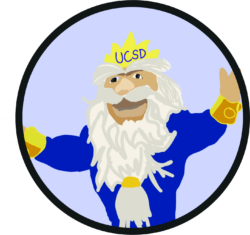 Due to UC San Diego’s connections with the ocean and the Scripps Institution of Oceanography, King Triton was born in 1964. Triton is the son of Poseidon and — get this — a merman! UC San Diego is known as a beach school, so the Triton is extremely fitting as a mascot.

It’s possibly one of the most creative UC mascots that actually matches the the school. I’m reliving my Percy Jackson phase just by looking at him! His trident could easily defeat every other mascot on this list, and if that doesn’t speak to his ultimate power, I don’t know what does. Triton’s at No. 3. 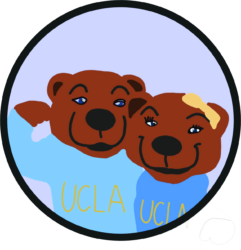 More bears! How exciting. At least this time there are two! No need to worry about any bear shortages here. UCLA originally adopted the “Grizzlies” as its mascot name but was forced to change it to the “Bruins” because of a conflict with the University of Montana.

Joe Bruin is the “official mascot,” but I prefer to think that Josephine Bruin is just as important. They look like two bears basking in the remnants of the spotlight from their glory days. They were definitely the popular kids in bear school who would say, “What? I’m not popular.” You probably recognize them as the bad guys from an early 2000s high school rom-com. Their eyebrows are giving me the impression that they’ll be nice to your face and then proceed to gossip about you the second you leave the room (Regina George who?).

Yet, here’s the thing: I’m not even mad about it. They’re such a power duo. Look at their cute little outfits. Look at Josephine’s adorable bow! I ranked this mascot (or should I say mascots) so highly for two major reasons: They look like they could go to UCLA and there’s nothing that’s overtly terrible about them. Plus, they actually look like bears. 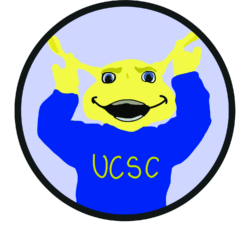 This is bound to anger some people. I think I’ve made my peace with that. The banana slug was voted in as UC Santa Cruz’s official mascot in 1986 over the sea lions. It even came up in the Crue v. Aiken court case, when Judge Terence Evans wrote, “We give the best college nickname nod to the University of California, Santa Cruz.”

Sammy the Slug, despite having made multiple appearances on “worst mascot” lists, is my personal favorite of the UC mascots. Sammy just looks so wholesome and mellow. He’s there for you, but not in an overbearing or pushy way. He’s just there if you need him. There’s also the banana slug connection to UC Santa Cruz, as they are extremely common around the area of the campus. Sammy the Slug perfectly encapsulates the laid-back, wholesome culture of UC Santa Cruz, and he seems like a cool slug. I would be friends with him. He doesn’t really creep me out, he’s unique and everyone loves him. What more can you ask for? Sammy’s at first place.

That concludes my ranking of the UC mascots. I suppose I could have been meaner, but as I went further into the rankings, I found myself appreciating more characteristics of each mascot. Don’t get me wrong, some of them are still extremely unsettling, but others are alright.

Amitha Bhat now knows way too much about the UC mascots.

Ole is awesome and the slander on this list against him will not be tolerated. We have a unique mascot in him compared to other UC’s who have animals. Learn to love him! Alums stand with him.