“The mapache is not the mascot we need, but the one we deserve.” 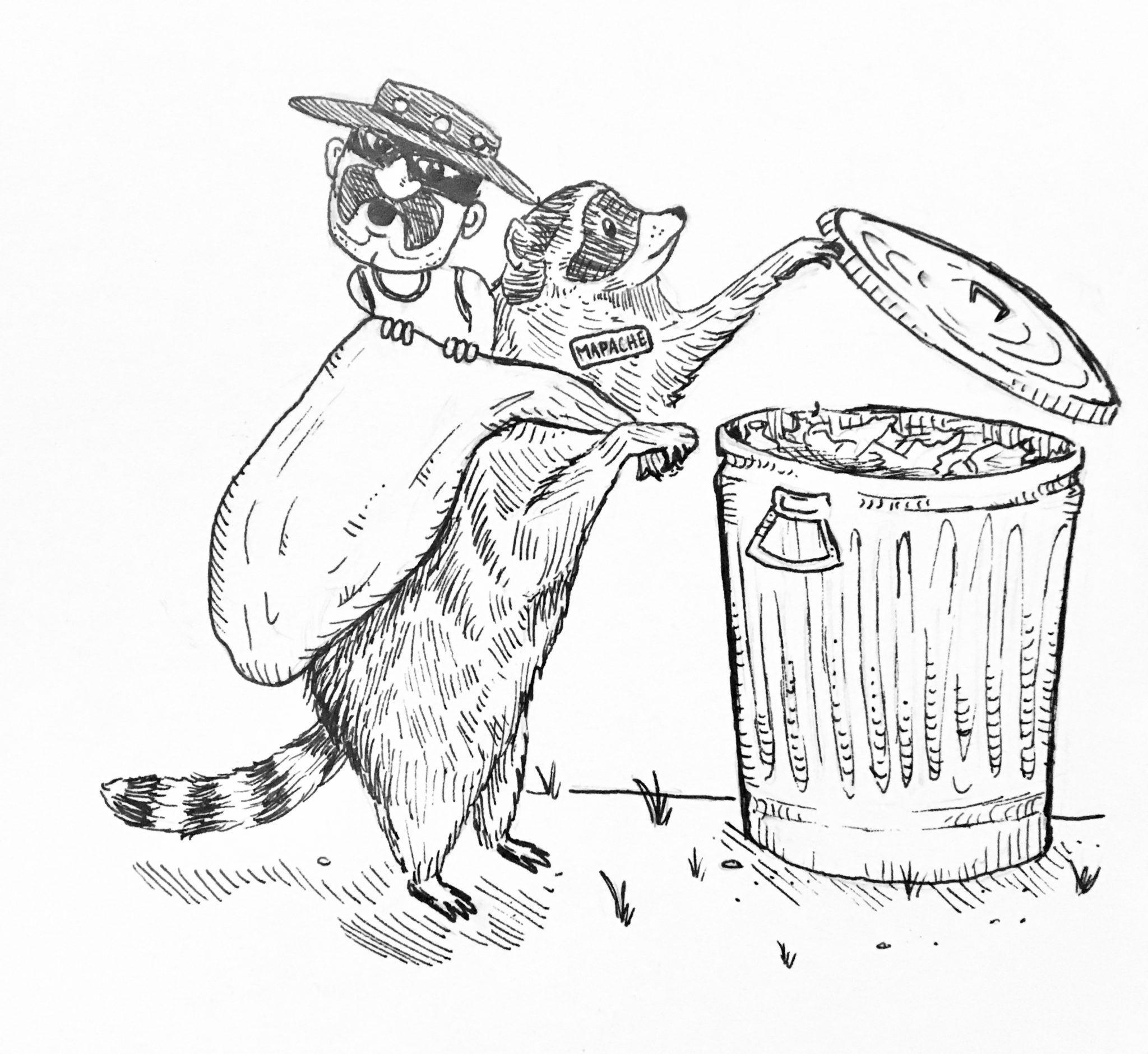 These are the words of Mario Infante, a man on a mission for change. Despite starting in March as a joke, the mapache has quickly blossomed into a movement. Be it our memes, our conversations, or our streets, the mapache, (Spanish for raccoon), has taken UCSB by storm. The now infamous petition started by Infante, demands the retirement of the gaucho in favor of the mapache, and UCSB students were quick to agree. Gathering signatures by the bus load, the petition rapidly surpassed 2,400 signees in the span of a week.

Historically, UCSB, then-known as Santa Barbara State College, championed the Roadrunners as its mascot. Gauchos back then were merely South American cowboys that wandered through the pampas and mountains of Argentina to Brazil.

However, in 1936, a student led effort dared to change that. Inspired by Douglas Fairbanks’s performance in the 1927 silent film, “The Gaucho,” students voted to change the mascot from the feeble Roadrunner, to something with a bit more grit, and thus the Gaucho was born.

Born from good intentions, the Gaucho mascot has been met with increasing scrutiny. Some argue UCSB’s use of the gaucho is cultural appropriation, while others claim the gaucho, or really Ole (sorry Ole), is just plain creepy.

Cultural appropriation is a sociological concept that describes a majority power taking elements from a minority power’s culture, and using them sacrilegiously and distastefully, typically in some caricature form. This usually occurs due to ignorance of the correct usage and meaning of the elements in question.

Now, while cultural appropriation is normally some mild racial offense, it shouldn’t be confused with cultural exchange or assimilation. Cultural exchange is defined as one or more cultures sharing and adopting elements as a form of goodwill and understanding. In assimilation, we see the blending and mixing of cultures to form a larger one.

Aside from simply redressing Ole to resemble a true gaucho, negating this whole mess, we could try something new. Retire the old gaucho and let the Mapaches take the reins.

Either which way, it’s becoming increasingly evident that critics of the Gaucho mascot may have a point. In UCSB’s use of the gaucho, we find a man, Ole, with an unshaven face, a comically large handlebar mustache, a Zorro like mask and a giant unsettling grin all tucked beneath a sombrero and stuffed into an athletic jersey.

Using the cultural appropriation definition, the sombrero and tacky mustache become difficult to justify when the rest of Ole is encased in modern clothes. This culminates with the failure to resemble even an ounce of a true gaucho at all. At this point it may as well be some mustache guy in a hat, so much so that calling this thing a gaucho is an insult to the true badass nature of the actual gaucho.

To put this in perspective, imagine USC stripped their famous Trojan down to basically the helmet and put it on some random guy, then earnestly championed him as if he were a member of the same fierce warriors of Troy.

To make matters worse, the complete disregard for the gaucho is intentional. Looking at UCSB’s athletic site we find everything that went wrong into creating our gaucho mascot.

Next, Ole doesn’t look up to Fairbank’s character, nor any actual gaucho at all. No, all that Ole personally aspires to be is Gaucho Joe, and the Phantom of the Dome.

Lastly, the icing on the cake comes from Ole’s implication of immigration status, as Ole refuses to state his date of birth, as it’s on the IRS to find out. Such implications are distasteful and insensitive, especially with the uncertain futures many undocumented immigrants face in our current political climate.

Aside from simply redressing Ole to resemble a true gaucho, negating this whole mess, we could try something new. Retire the old gaucho and let the Mapaches take the reins.

The mere possibility of being a Mapache inspires pride that I didn’t know UCSB students could possess. It gives us a glimmer of hope that one day we wouldn’t have to explain our mascot to anyone else ever again.

Raccoons have been an integral part of Isla Vista’s culture, myths and history. Be it their daily interactions with our roofs, streets or the trash cans, the infamous trash bandits can be found foraging for their next meal or just having fun. Like UCSB students, the furry critters are creatures of honor, nobility and cleverness. While in droves, they are akin to the swaths of students that wander back and forth through campus each day. In legends, the albino raccoon wanders through the streets of I.V. and is said to be an omen of wisdom and light.

What’s more, mapaches just seem to connect with UCSB students. Taking a look at UCSB’s meme page, you’d be hard pressed to find many posts that doesn’t have some mention of the mapache. From just this week alone the use of mapache has skyrocketed on both Facebook and Google’s search engine. Even further, the mere mention of the mapache to a group of UCSB students excites them. The mere possibility of being a Mapache inspires pride that I didn’t know UCSB students could possess. It gives us a glimmer of hope that one day we wouldn’t have to explain our mascot to anyone else ever again.

Moreover, the adoption of the Mapache mascot doesn’t mean the end of any of UCSB’s time-honored traditions. If anything, it would just justify them.

For example, tortilla throwing, a cherished UCSB tradition, makes no sense from a gaucho’s point of view, (why waste food?) while it does from a mapache’s. Throwing of the tortillas means more food for our beloved trash pandas. Likewise, the chants that UCSB students stammer don’t have to end either. Substituting “Mapache” in place of “Gaucho” seems to have little to no effect on either the meaning nor the rhyme of the chant. Taking things from a logistics perspective, all things considered, this transition could happen easily, and swiftly.

From petitions, to designs, to excitement, the mapache wholeheartedly encapsulates everything that is the fighting spirit of UCSB. So much so, that some students excitedly took the mapache moniker with pride. As such, it is without question, that the mapache is of worth to champion UCSB and its students.

Kekai ‘O Kalani Akita wants our favorite furry friends to be elevated to the mascot status they deserve.

I’m highly against being a darn raccoon; thieving, dumpster diving squirrels do not rally my cry. And besides, I knew the phantom of the dome… don’t kill the legend of the Gaucho for make believe pc.

Not sure how the UCSB Gauchos represent cultural appropriation when the cowboys are all the way down there in Argentina.

I was really hoping this was an April Fools joke.

Gauchos is racist when you squint at it just the right way. So let’s replace it with the most racially charged mascot imaginable! Great fucking idea.

Please get a life. Why do you post on almost every article on the school news paper for a school you used to attend. Its pathetic.

The Nexus needs to fire this writer. Two shitty articles in a row.

Firing a writer is really extreme. This is a great avenue for writers to grow, learn, and practice journalism. I’m sorry that you don’t like their articles, but I beg you not to write that they should fire this writer. If someone takes you seriously, you could be cutting someone’s passion to pieces just because you didn’t like two of their articles. Please be careful what you post.

The Phantom was great, he would dress as basketball referee and dance when you’d didn’t expect it. He had blow up referees. He even had a team of Phantoms! He wasn’t Gaucho Joe, but he was glorious! The Racoon is cool, what could go wrong. Psyche.

The Coons? Nothing at all raciest about that.

Really hope this is a joke. If the mascot must be changed, which I would dislike, don’t pick a damn dumpster thief. There is nothing noble about them and to be compared to them is insulting.

I would prefer updating his look so he looks like an authentic gaucho so people can get interested in learning about gauchos and South American cultures, use our mascot as a teaching tool.

Nicely written article but stupid idea. What started as a joke shouldn’t be taken seriously. Honoring an image of the vaqueros of the Pampas as our long term mascot seems to remain a good thing, despite some overly sensitive PC types who want to create a stir over nothing. Stanford suffered from the same thing when they switched from Indians to a color, and now have a tree as a mascot. Extreme PC I think. California had more Indians than any state and still does. Why not have the best college in the state (though I am partial to UCSB)… Read more »

“…the furry critters are creatures of honor, nobility and cleverness.”
When I look at a raccoon, the words “honor” and “nobility” are not the first words that come to mind. Also, raccoons are perceived more as “sneaky” than they are “clever.”
No matter how eloquently the argument is written, raccoons are most often associated with garbage. Even the writer mentioned this connection, whether it was on purpose or subconsciously.
If the raccoon were our mascot, it’s stereotyped characteristics would not reflect UCSB students and alumni.

Using the Spanish name for Raccoon as our mascot? Isn’t that cultural appropriation also?