The UC Santa Barbara unit of UAW 2865 — a union representing over 19,000 academic student employees across UC campuses — held town halls on Feb. 10, 16 and 17 as the union prepares to enter bargaining negotiations for its 2022 contract renewal. 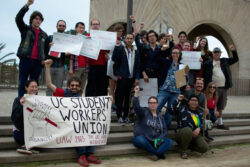 UAW 2865 made its initial bargaining demands available to the public on Jan. 14, as did the UC Office of the President (UCOP) on Feb. 1, in two documents known as the Sunshine Proposals. This legally required step in the bargaining process provides the public with the opportunity to inform themselves of the proposals and offer comment to union leadership.

The Feb. 10 and 16 town halls served as campuswide forums for academic student employees (ASEs), a term referring to undergraduate and graduate students working as tutors, readers, graduate student instructors and teaching assistants across the UC.

Among key demands from the union are proposals to raise the living wage, eliminate rent burdens, improve job security and expand paid leave and childcare programs for ASEs.

Over 90% of ASEs in the UC system are rent burdened or pay more than 30% of their income in housing, according to an internal union survey. UCSB union members are planning a rally for Friday, Feb. 25, to demand that the UC addresses the housing crisis faced by its student workers.

“[The UC must] provide all ASEs with affordable and quality housing near work and housing subsidies appropriate to the local cost of living in order to reduce climate impacts, promote environmental justice, and improve diversity at UC and protect affordability and housing security in the broader community,” the union’s Sunshine Proposal read.

UCOP is proposing no new changes for articles covering childcare, health and safety, health benefits and workplace and instructional support; its proposal for wages is “forthcoming,” the UCOP Sunshine Proposal read.

“We’re going to take this feedback back into the working groups, put it up next to the proposed language and see what we can incorporate so that the contract is representative of the interests of as many ASEs as possible,” Haider said.

A major point of discussion at the Feb. 17 town hall was the role of the UC Police Department on campus. The union is proposing divesting from the police and redirecting funds to on-campus mental health services and alternative campus safety programs.

“It is a labor issue because we have the right to be safe in our workplace, and police present a critical threat to the safety of graduate students and other ASEs holding marginalized identities,” Haider said.

The 2022 bargaining team was formally assembled in Fall Quarter 2021. The team sent out a member feedback survey in fall quarter to assess union member’s priorities, in which union members ranked wages and cost of living as high priority, according to Haider.

Haider said 74% of union members support partial defunding of the police, while 56% support abolition, based on the member feedback survey.

UAW 2865, which enters collective bargaining every four years with UCOP, last renegotiated their contract in 2018.

Haider said the 2018 contract was largely shaped by moderate and conservative voices and did not adequately reflect the agenda of minoritized groups on campus.

Haider, who said she takes issue with the “majoritarian” structure of the union’s bureaucratic process, described how the 2018 contract passed by a slim majority of 52% in favor of its ratification and left many union members dissatisfied.

“It passed, but barely, and quite a few members weren’t happy, namely those at Santa Cruz, also those at Santa Barbara and a few at Davis,” she said.

Ratification rates were also disproportionately weighted across UC campuses — for instance, only 10% of UC Santa Cruz union members voted in favor of the contract.

UCSC began wildcat strikes in December 2019 to demand a living wage and improved working conditions, launching the Cost of Living Adjustment (COLA) movement that then spread to other UC campuses.

“That movement was kind of truncated by the university-wide shutdown due to the COVID-19 pandemic in March 2020, and so a lot was left unresolved after COVID,” Haider said.

However, Haider said that with the COLA movement, more liberal-leaning union members ran for election and were appointed to UAW 2865’s bargaining units across UC campuses, thus shifting the union leadership’s political alignment.

Haider expressed how she successfully ran for and was appointed to a position on the UCSB bargaining team in order to uplift the voices and interests of union members holding marginalized identities.

“For quite a while there ha[ve] been feelings, on the UCSB campus in particular, that the Santa Barbara unit does not take into consideration the needs of graduate students holding marginalized identities in favor of a straight majoritarian viewpoint. This has been very frustrating for a lot of us, speaking as the executive board member of one of these organizations,” Haider said.