The Daily Nexus
Nexustentialism
It's satire, stupid.
A Certified Slay! University To Demand Cocktail Attire in All Dining Halls
February 18, 2022 at 4:20 am by Migraine Mommy 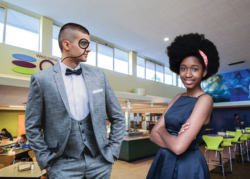 Kiss your flip flops and crop tops goodbye! In an attempt to make UC Santa Barbara institutionally “swag as fuck,” dining halls are mandating a strict formal dress code at all meal times.

In a press conference last week, Chancellor Yang announced his plan to instate a dress code in dining halls as soon as possible, saying, “I really just think that cocktail attire in the dining halls would make everyone look less pathetic.” To cement his stance, Yang further added, “It would be such a slay!”

Amanda Hump, head of the newly formed committee Suits, Stilettos and Slop, said that every day students will be required to either don a full tuxedo or floor length dress as well as appropriate dress shoes. However, she explicitly stated that she did “not want to be a dictator” and that the committee plans to incorporate fun, additional elements to break up the monotony of formal dress. “We will be having dress up days to keep things spicy! Monocle Monday and Three-Piece Suit Thursday are already on the roster!”

Miss Hump also made sure to emphasize that if students do not follow the dress code, they will actively be denied dining hall access and all food until they “stop dressing like poorzies.” However, to slowly introduce this drastic change in policy, Suits, Stilettos and Slop decided to do a test run at Ortega before making it mandatory at all dining halls.

“I wanted to pick up my food at Ortega, and they wouldn’t let me,” said second-year student Jillian Billian. “Apparently it was Top Hat Tuesday? I can’t even afford a top hat.” She choked back her tears before further elaborating, “I rounded the corner to Ortega, and I saw a line of Abraham Lincoln looking-motherfuckers and immediately knew something was wrong.” Our Nexustentialism correspondent had to end the interview because Billian collapsed after uttering this statement, presumably from exhaustion and lack of nourishment.

This startling interview with Miss Billian is only one of many, raising dire questions about the accessibility of the new mandatory dress policy. Third-year James Day told Nexustentialism, “I didn’t want to starve, so I placed an express order for a monocle on Etsy for Monocle Monday. With the express shipping, I had to pay close to $200 dollars,” she declared sullenly. “I went through all this trouble and money, but when I showed up to Ortega on Monday with my monocle on my eye, they still denied me food because they declared it ‘wasn’t swag enough’ and that the ‘color was wrong.’” Miss Day’s experience highlights how this policy could target students barely able to afford such frivolous expenses and leave them without food.

This commentary by Billian and Day emphasizes how the policy disproportionately targets students without disposable income and draws damning conclusions about elitist Yang. Until further notice, the only thing being served at the dining halls will be looks.

Migraine Mommy has rapidly and fearfully ordered a three-piece suit, a monocle and a bolo tie.