The Daily Nexus
Sports
UCSB’s Black Alumni Are Thriving in the NBA
February 17, 2022 at 1:18 pm by Garret Harcourt

Throughout the years, UC Santa Barbara has produced professional basketball players, and historically there have been Black NBA players coming out of UCSB. 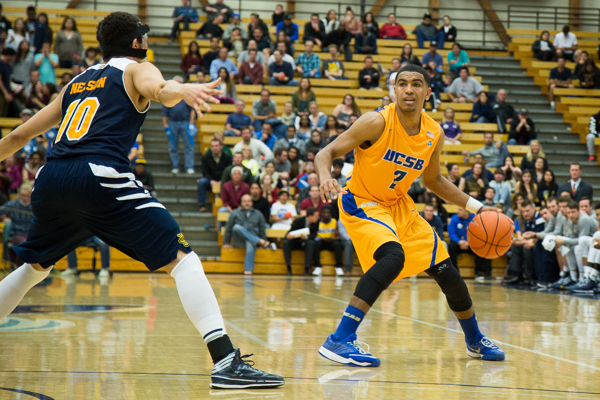 In 2012, guard and forward Orlando Johnson was drafted out of UCSB in the second-round pick No. 6 of the NBA draft to the Sacramento Kings.

Then in the same season, James Nunnally went undrafted to the Philadelphia 76ers and most recently played for the New Orleans Pelicans in the 2020-21 season. Although he is out of the NBA at the moment, Nunnally is still playing professionally overseas for the Maccabi Tel Aviv Basketball Club.

In the 2015 NBA draft, Alan Williams was the next to go undrafted into the NBA, making his way onto the Phoenix Suns’ roster. Williams was last on the Brooklyn Nets in the 2018-19 season and now also is overseas playing for Lokomotiv Kuban.

The two most recent UCSB alumni in the NBA are the only current players active in the league. Gabe Vincent and JaQuori McLaughlin are both guards in the NBA who came from successful seasons at UCSB.

Coming into UCSB out of Stockton, California, Vincent was stellar as a freshman, winning the 2015 Big West Freshman of the Year while averaging 10 points per game and shooting 42% from the field. The accolades continued to roll in for Vincent during his four years playing at UCSB, as he was a 2016 All-Big West Honorable Mention, a 2017 Academic All-Big West and a 2018 Second Team All-Big West to cap off his UCSB career.

Although Vincent piled up the accolades during his time at UCSB, it did not lead to him being drafted into the NBA. So, he was picked up as a free agent by the Miami Heat on a two-way contract with their G League-affiliated team.

In the G League, Vincent thrived in his second year, averaging 23 points per game, shooting 47% from the field. This earned Vincent a call up to the Miami Heat where he provided a decent stat line off the bench averaging 5 points a game and shooting 31% from the three. This current NBA season Vincent has stepped up big for the Heat, being a huge contributor averaging 9 points per game, 3 assists and 24 minutes per game.

Not only that, but Vincent also competed in the Olympic games with Nigeria, being an intricate member of the team’s lineup.

The most recent NBA player from UCSB, McLaughlin, had a different path to UCSB. Being the 93rd best player in the nation coming out of high school, McLaughlin chose to go to a bigger program, Oregon State. Holding 13 school records and being named an Associated Press First-Team All-State twice, McLaughlin was expected to contribute huge to Oregon State and ended up getting numerous awards his redshirt freshman season.

After an outstanding freshman campaign, 6 games into his sophomore year, McLaughlin decided to transfer to UCSB.

Progressively getting better every season, his third and final year at UCSB McLaughlin averaged 16 points per game, 5 assists and 1.5 steals. This stat line was enough for the point guard to earn the Big West Conference player of the Year and the Big West Tournament MVP, which was the first time a player won both since 2012.

UCSB set new precedents with McLaughlin as their point guard, setting records for consecutive wins and consecutive conference wins, and earned them an NCAA tournament bid.

In the end, McLaughlin remained undrafted by the NBA teams and ended up signing a two-way contract with the Dallas Mavericks. Although he hasn’t featured much in their games, McLaughlin is still a rookie and could follow the same path as Vincent, featuring for Dallas’s G League team for a couple of years.

All in all, the Black athletes to come out of UCSB’s basketball program have generated great success at the next level and are more than deserving to get recognition this Black History Month.