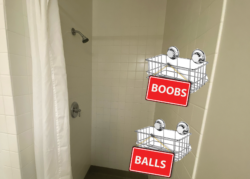 Justice at last! In an effort to save face after his now infamous pay raise, Chancellor Yang agrees to install adjustable boob and ball holders in every UCSB dorm shower.

“I just can’t hold my boobs as I shampoo my hair,” said first-year student Uma Davis, “UCSB should be ashamed. What the fuck am I supposed to do? I’m not an octopus.” Students like Miss Davis have long demanded action from the administration to adopt more inclusive infrastructure to accommodate their lonely appendages. Trent Gainz, a third-year student and head of the “Hold My Mounds” movement, expressed relief and elation over this momentous decision. “We have been fighting for this for over a year now,” he emotionally stated. “No Gaucho will ever have to experience cold boobs or balls in the shower. We are finally safe.”

The devices are to be installed in every dorm shower on campus and are adjustable, so they can accommodate boobs and balls of any height, size or shape. Similar to a beach umbrella, the pole on which the mound-holder rests can slide to any height, so it can comfortably grip your free swinging appendages. Nexustentialism was able to secure an exclusive interview with the inventor of the apparatus — Joe M. Ama. He stated, “I think students will be very excited to see what my team and I have created,” adding that it is “the epitome of comfort.” He also alluded to a collaboration with Bidet makers, hinting that the device could include warming mechanisms. However, he declined to fully elaborate — what a tease!

While some Gauchos are beyond satisfied with this progressive decision, others are wary of Yang and his promises. “Remember when he said we would be in person by the 18th?” asked fourth-year Bella Ramsey. “That didn’t happen. So why would I expect this to?” Miss Ramsey makes a point; the student body must continue to hold Yang and the campus administration accountable. Other students claim that Yang did not make the decision with the right intentions. First-year student Sadie Way said, “Yang is only doing this to save his ass after his pay raise. He knows he is one wrong step away from being thrown in the lagoon.” Either way, students seem to doubt Yang’s intentions and his ability to follow through with his promise.

But for some students, these are not the most pressing issues. This progressive decision only seems to be the first victory of the “Hold My Mounds” campaign. Trent Gainz believes that boob and ball holders in the showers are not enough but that they should be included in every toilet across campus as well. He remarked, “Why should we stop at this victory? Why halt the tide of progress?” After fully equipping UCSB with boob and ball devices, Gainz hopes to take his campaign further than we could have ever imagined. He wants to take his mission nationwide and leaves us with the pressing question: “What is Biden’s plan for this?”

Elise Ramacciotti plans to move back into the dorms … for unspecified reasons.