The Daily Nexus
Sign of the Times
You Should Abandon Your Climate Nihilism
December 28, 2021 at 2:06 pm by Zoha Malik 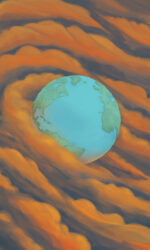 Possibly the worst part about being a part of Generation Z is inheriting all of our predecessors’ mistakes, particularly the deteriorating climate — a disaster that only looms closer and closer. A recent U.N. report paints a grim picture of what our future looks like: The best-case scenario, in which countries sharply curb emissions immediately, would have a billion people exposed to life-threatening heat waves, hundreds of millions to droughts and countless species of plants and animals leaving the face of the planet forever.

This sort of (i.e. extremely depressing) report makes it easy to understand why people are subscribing more and more to climate nihilism. This form of belief promotes people to think nothing can feasibly be done or that any action taken on their part would be meaningless when it comes to climate change. There are a couple of names for this line of thought: doomism, denialism, defeatism — all leading to the same conclusion of hopelessness. Besides the obvious cause of our planet’s persistent rise in temperature, why are people attracted to this way of thinking?

People may feel nihilistic about our climate’s future because of how our impact on the environment can be framed. We’ve been told that our individual impact on the environment holds tangible significance. While this isn’t necessarily untrue, individual efforts tend to be dwarfed by overpowering corporations. Throughout the pandemic, during which much fewer people were driving cars or taking airplanes, carbon emissions were still being released in massive numbers. People questioned what the point of even trying was.

The answer is a lot more complex than what we might think, especially since people are experiencing the climate crisis from the average citizen’s point of view. According to The Guardian, amateurs and newcomers have a tendency to be more alarmist and defeatist than experts who have been working on the climate crisis for years. This tends to cause a lot of terrifying headlines appearing in the news, kindly letting us know we’ll all be dead in 10 years.

The idea that we’re doomed undermines the work of people who are actually trying to fix the mess we’re in. It cannot be understated that there are many expert voices that express hope; in fact, climate scientist Michael Mann compares alarmist takes on climate change to outright denialism, as both end up leading to disengagement and inaction. To him, such takes are “dismissive of the actions that countries, states, cities, companies, and individuals are taking every day to move us off fossil fuels” and even act as a great obstacle to climate action. In his book, “The New Climate War: The Fight to Take Back Our Planet,” Mann said that “the solution is already here. We just need to deploy it rapidly and at a massive scale.”

It’s a lot better to be angry than desensitized entirely.

So, while there is political gridlock and pushback from the fossil fuel industry, things don’t have to seem so grim and absolute. Though it may be difficult to keep up with, legislative change is slowly but surely occurring. Such change can even be seen within our own fossil fuel-guzzling country, where President Joe Biden is advocating for $300 billion to aid the transition to renewable energy. Activists and climate groups are fighting the fight against climate change every day, with some even here at UC Santa Barbara such as Fossil Free UCSB and the UCSB Environmental Justice Alliance along with other organizations working towards sustainability, and in the greater Santa Barbara area including the Sunrise Movement, 350 Action and Citizens’ Climate Lobby.

But, there can be times when this doesn’t feel like enough, or when you still feel incapable of helping at all. The best way to feel better about our prospects, as a species, is to do so with other people. According to Humboldt State’s Ray, the author of “A Field Guide to Climate Change: How to Keep Your Cool on a Warming Planet,” Americans tend to believe the myth of individualism, which can make us feel powerless.

We must reframe the way we think about crises. There are many groups working on communal solutions and joining them, even for a protest or two, can put your unease about the future to ease. But, not only does getting involved with your community aid the cause, working towards a common goal can be fulfilling, even joyous. Attending protests, working on political campaigns and even working within environmental organizations can help you understand that you’re not alone in this.

Climate change should generally not be viewed as something with a singular fix. The process is going to be arduous, slow and rife with disagreement if our congressional floor meetings are any indication. Individual people may feel less helpless if they understand that this is a situation that they’re going to have to deal with for a long time. No matter what we do now, we’re still going to see major effects from climate change in the coming years. This doesn’t mean that we need to give up, only that we should adapt and move forward.

It might also help to remember who’s benefiting if defeatist attitudes towards climate change are widely adopted. It’s certainly not you or I — it’s the people making bank by pillaging the planet. Old shareholders with properties in Newport Beach and gentrified Hawai’i couldn’t care less about what the future looks like if they’re going to be dead in a decade or so. Corrupt politicians whose campaigns are funded by oil and gas companies probably carry a similar point of view. If we passively watch on as if it’s all inevitable, these kinds of people profiting off our environment’s demise are going to keep “winning,” so to speak. It’s a lot better to be angry than desensitized entirely.

Humans have faced a lot of existential threats and, for better or for worse, we’re still here. As a second-year college student, I’d fail miserably if I tried to tell you how the future of planet Earth looks. But if I had to choose between fearfully awaiting the apocalypse, versus actively trying to stave off both despair and heightening temperatures, I’d rather multitask.

Zoha Malik thinks you should make a mutual commitment with her to quit doom scrolling.

I know it is an emotional issue but I always tell people to look at the facts and data for yourself and not read too much in to sensational climate change headlines.

Excellent point. Much of the ‘data’ presented as ‘fact’ is either incomplete or corrupted.

people have been told for a long time that climate science is broken, $1 billion a year has been spent on the Climate Change Denial Campaign annually for a couple of decades, funded primarily by the fossil fuel industry. the scientific reality is there is quite a lot of certainty about what is happening and why. the primary issue facing climatology is why it lags reality so much, we’re facing climate events now that weren’t meant to be happening until 2030.

anyway, please read the facts and data for yourselves, I think you’ll find it enlightening.

This article is hopium. There is no hope. You’re still in denial. Allow yourself to express grief – humanity will go more or less extinct this century and industrial civilization is to blame. It is impossible to stop, else we would’ve made some sort of progress. The fact that we havent shows how the incentives are stacked against us. It’s a classic tragedy of the commons, and no amount of small adjustment (i.e. recycling) is going to fix the underlying problem.

You don’t know history if you buy into the doomism of climate change. It is bad but not making g humans extinction bad. We have faced worst and survived. Also most cli.ate change extremes predictions make no sense and contradict them selves. I am not saying we shouldn’t change our ways. My best example is solar panels. What you like paying high electricity bills. We have the solution just need to use it. Plus hey the earth is forever changing. Fossil fuels not at fault. I mean they are but not for them most of us would already be dead.… Read more »

hmm… thoughtful message. Needs to be updated from time-to-time as our environment changes in ways that humans have never experienced before.