The Daily Nexus
Nexustentialism
It's satire, stupid.
Horrifying! Chancellor Yang is a Sagittarius – Here Are Our Top 3 Predictions for Sag Season
December 2, 2021 at 4:20 am by Sadie Nym 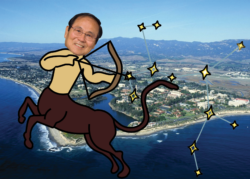 PASADO RD, ISLA VISTA – A soft wash of silence fell over the houses on the 66 block of Pasado Road last Sunday. “Finally,” sophomore Capri Khorn let out with a sigh, propping her feet up atop her coffee table. “Scorpio season is over!” Indeed, the past month has been a rough one for Gauchos — midterms, Munger Hall and a shitbag ex’s birthday seemed to plague us at every opportunity possible. At least it’s over, right?

Wrong. Just when Khorn thought the University might finally let her free from its jaws, it dawned on her. It’s Sagittarius season. And Chancellor Yang … is a Sagittarius.

But it’s just a silly zodiac, right? Astrology doesn’t actually mean anything, does it? Wrong and wrong again. After swirling rumors that the recent lightning storm was caused by Chancellor Yang’s personal quest for immortality, Nexustentialism began investigating other mythical endeavors in which our beloved chancellor-turned-wizard may potentially be engaging this December.

What a festive kickoff to the holiday season! Amidst community outcry that, “We like the beach,” and “Why the fuck is it snowing,” we predict Yang’s response to be along the lines of “Fuck it! Fuck you! I want snow, so let there be snow! Go back to your fucking hotel, poors!” Typical Sagittarius! The snowman will continue to smile, standing at the height of approximately 2.75 Storke Towers! Wow! Additionally, the nose of the snowman will be made of the world’s largest carrot, measuring a whopping 20 feet! The $1.4 billion purchase will be made after big savings following the firing of 98.6% of teaching staff, reducing the student population to 13 and whittling down the number of majors to one (CCS computing). What a treat!

2. Start using they/them pronouns in an uneducated but good-willed attempt to be more inclusive

Diversity win? Upon noticing the minority of students at UCSB who use they/them pronouns to affirm their gender identity (or lack thereof), Chancellor Yang will strive to increase representation by changing their own pronouns to they/them. Impulsive and adventurous, Sagittarii often act before thinking, leading to some rash decisions; in this case, however, Chancellor Yang’s team will beg and plead for him not to “come out” in this way. “Please, Chancellor!” they will cry, “Think of the children!” But big H.T. will only respond, “Silence, bigots!” and will proceed to make history.

A classic Sagittarius move! All that pent-up fire sign energy has been brewing since Leo season in August, and it’s going straight to the groin. Sagittarius season holds for Chancellor Yang an orgasm so powerful that it strikes them straight down into the throes of slumber, with not a crumb left for Dilling. Pitiful!

Sadie Nym is walking in a winter Mungerland.