UC Santa Barbara’s Resource Center for Sexual and Gender Diversity held a vigil for Transgender Day of Remembrance on Nov. 19 at the MultiCultural Center to honor the memory of transgender people killed in acts of transphobic violence. The event marked the university’s first on-campus event dedicated to Trans Day of Remembrance. 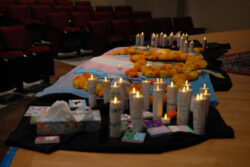 The event included a name reading and an in memoriam slideshow of those lost, followed by painting activities and altar building and ending with a moment of silence.

The Resource Center for Sexual and Gender Diversity (RCSGD) also brought a Counseling and Psychological Services counselor for the duration of the programming to support students looking to process grief or have conversations about gender identity.

“I think that’s what the goal of this was, not just honoring them but also providing a space for people to mourn in a safe, warm, affirming environment,” Sosa said.

During the vigil, RCSGD student volunteers read aloud the names of transgender and gender non-conforming individuals killed in the United States in the past year.

The at least 47 deaths in 2021, compiled by the Human Rights Campaign in an annual report, marks the deadliest year on record, with transgender people of color facing significantly disproportionately high rates of discrimination and violence.

“Many of the names on the list every year are disproportionately trans women of color, trans femmes of color, so recognizing that intersectionality of race, gender, trans identities is something that we still need to keep in mind,” Sosa said.

Drew Buchanan, a third-year sociology major, serves as the trans and nonbinary empowerment coordinator for the RCSGD and helped organize the event. He described how transphobic violence and anti-trans legislation remain pervasive despite the notable gains that activists have made for the broader LGBTQ+ community.

“A lot of non-trans people, and even people in the LGBTQ community who aren’t trans, saw that we got gay marriage rights and other big milestones [but] … all the trans people of color that helped pioneer the gay rights movement are still being murdered in the street,” Buchanan said.

Buchanan added that though it has its struggles, UCSB tends to be a fairly safe and queer-positive community. As such, observing Trans Day of Remembrance serves as a reminder of the hostility that many trans people still face outside of this bubble, he said.

“Being able to recognize that it’s not that way everywhere else can be grounding,” Buchanan said. “Our community of trans people is nationwide, and it’s not just, ‘Oh, we’re fine, so we don’t have to worry about it.’ There’s a lot of people that are subjected to violence that we might be excused from here.”

To memorialize those lost, students constructed an altar and decorated it with flower wreaths, art made by the attendees and electric candles, each one in honor of a victim of transphobic violence.

For the altar, Sosa contributed a small canvas painting, which depicted “Iris Santos” — the name of a Latina trans woman killed in Houston, Texas, on April 23 — surrounded by a colorful sea of pink and blue hues.

“I was making a painting for one of the members on the list and also on the slideshow that we lost, and that was a way to help me process both [the] grief of their loss but also celebrate their life through color,” Sosa said.

Previously, instead of having on-campus Trans Day of Remembrance gatherings, the RCSGD promoted vigils occurring in Santa Barbara to the student population.

In addition, Buchanan said this was the RCSGD’s first trans-focused event of the quarter marketed to the general public. Typically, he coordinates weekly trans-empowerment hours, a trans-only space dedicated to building community and providing a place for discussion.

The RCSGD provides further resources for trans students, including legal guidance for name and gender changes and help to obtain gender-affirming clothing and binders.

“We’re trying to make it easier for the trans students on campus and provide a space that has no judgement and is 100 percent safe for people who have been out for years and people who have just started to question their gender [identity],” Buchanan said.

According to Buchanan, most of the students at the Trans Day of Remembrance event identify as members of the LGBTQ+ community. However, he noted his desire for cis people to get involved and demonstrate their allyship with trans students.

“My position is by and for trans people, so I’m focusing on trans empowerment and lifting them up and making sure they have resources to stand their own ground and defending our own rights, but I ultimately would love every cis person to be aware of what’s really going on and how targeted we are, just so that they can have a sense of understanding and background in which to interact with trans people,” Buchanan said.

Sosa added how the fight for trans rights benefits from the inclusion of non-trans individuals.

“This is not just a day of remembrance for trans folks to mourn, but it’s also a day where non-trans folks can show their solidarity by coming in and honoring the memory of the people that we lost,” Sosa said. “Also, it puts in perspective the work that we still have to do as the RCSGD, the community, trans folks, non-trans folks — everyone, really.”