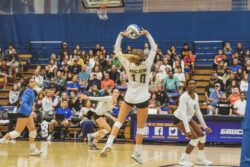 However, the Gauchos have hit a bump in the road as they have only won one of their last three games.

Although they lost to two teams — Long Beach State and Cal Poly, who have winning records in conference play — their overall record shows the Gauchos should’ve beat them.

At the top of the conference sits Hawai’i, with a mere one loss, but that loss came from playing against the Gauchos, a game where the Gauchos won in straight sets.

Their play most recently has been filled with many mistakes, with the Gauchos often beating themselves in these contests.

In the first loss of this three-game stretch, the Gauchos were outplayed in each facet as they committed 28 errors to Cal Poly’s 25 errors and had only 41 kills as opposed to the Mustangs’ 56.

A standout player has been middle blocker Rowan Ennis who in her senior season has a team best .427 kill percentage and 311 points despite having 352 less chances than the points leader and freshman outside hitter Michelle Ohwobete.

Ohwobete herself has been quite impressive, with a team best 313 kills and averaging 3.07 kills per set. Although she has the most errors on the team, the number is miniscule due to the team‘s high 769 total attempts on the season.

Sophomore libero Macall Peed has proved to be a difference maker on defense, providing the Gauchos with 4.57 digs per set and 425 total digs.

Sophomore middle blocker Deni Wilson has also been a consistent force for the Gauchos, providing 1.04 blocks per set while having a .396 kill percentage, which are each second best of the team in each category.

Junior setter and libero Grace Kloss and senior libero Kobie Jimenez have each been serve specialists for the Gauchos, having the second and third most serve aces with a combined 41 serve aces.

Although the Gauchos are two games behind Hawai’i in the standings, they own the tiebreaker and there are still four games to play for each team to finish the regular season.

Hawaii Big West Champions!! Moving on to the 1st Rd of the NCAA TOURNAMENT!