UC Santa Barbara students returned to campus this quarter to find that Ortega Dining Commons, formerly a dine-in location, would only offer takeout until further notice.

Student reactions have so far been mixed to positive, with several growing pains complicating the switch from dine-in eating to takeout only. 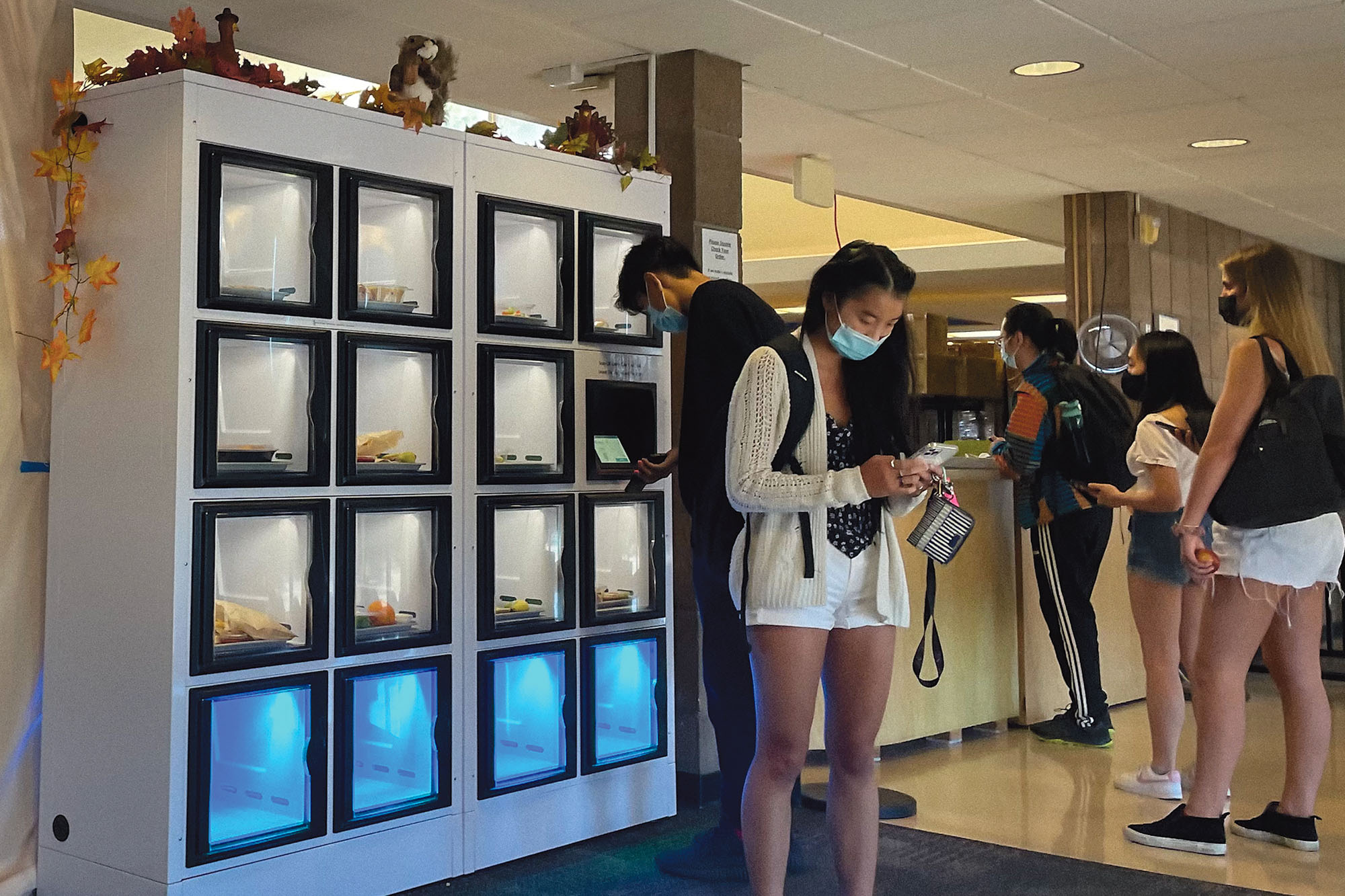 The shift to takeout will be permanent until further notice, according to Robbie Wright, the associate director for residential dining at UC Santa Barbara Campus Dining.

“Over the past year-and-a-half, mobile ordering and food pickup has become much more mainstream,” Wright said. “And we felt, in dining, that was something that we wanted to address in a more significant way.”

“Everyone who has a meal plan can still go and dine in at the other dining commons,” he continued. “So [this change to Ortega] just provides more options.”

Only the entrance area of Ortega remains accessible to the public. Students place orders and select a pickup time through the Transact Mobile Ordering app, and they receive a notification once their order is ready. After showing their order status and green badge to a lobby checker stationed at the front door of Ortega, they may enter the facility and pick up their meal from food lockers.

The menu has changed too, offering a far more limited selection. According to Wright, the modifications serve to prioritize the portability and convenience of takeout over the variety and quantity typically associated with dine-in eateries.

“The idea was to narrow the menu to static, repeating menu items that were craveable and delicious and attractive with ample amount,” Wright said.

According to Wright, the choices are familiar but “unique” compared to other dining halls, in order to incentivize students to try out the new Ortega.

Third-year mathematics and psychological and brain sciences double major Bill Nguyen ate at Ortega both before and after the switch.

“The food now is a bit better,” he said. “It sort of has to be because you’re getting less for what you’re paying for.”

Nguyen added that he would like to see a rice dish as a regular menu option.

Others, however, were less enthusiastic about the switch.

“It’s just not as good or as fresh,” Alejandro Rojas Rodriguez, a third-year computer science major, said. “I always favored their menu, but now it’s kind of the same stuff. They don’t really switch it up as much.”

At the beginning of the quarter, students could pick up to three sides for takeout, according to Theodore Maxwell Worona, a fourth-year history major. However, a typical Ortega takeout meal now consists of an entrée, side, dessert item, fruit and drink.

“We’re still making adjustments,” Wright said in response to the reduction in sides. “If we’re making a change, it might be because what we originally thought that we would be able to accomplish, we’re not able to keep up with.”

According to Wright, one caveat is the lack of material.

“During the pandemic, there’s all kinds of supply issues that are happening,” Wright said. “It’s not just isolated to the outside world — it happens here on campus as well.”

A second caveat comes from limited labor in Ortega after pandemic-era downsizing.

“There’s only so much labor to produce all that stuff,” Wright said. “So tough decisions have to be made.”

Another adjustment that Ortega has made while experimenting under the new system, he said, is occasionally adding entrée specials to the menu to increase variety. These items exist outside of the core offerings and rotate every week or two.

“They’ve been very popular,” Wright said. “And maybe some of those special items that we’re preparing, maybe they find their way onto the regular menu.”

Despite changes to the food and procedures at Ortega, the building itself — mural and kitchen equipment included — remains the same. It’s only the usage of the space that is different. Ortega has now become part storage closet, part takeout prep and part catering service.

“Campus catering is not something that is customer-facing,” he said. “But there’s a whole other operation that’s going on inside there as well as the takeout.”

Inside the building, a bank of food lockers designed by Apex Order Pickup Solutions contains trays with recent orders. To the left are tables with napkins, compostable utensils and paper bags. Scanning an order’s QR code from the app on the right side will cause a locker to flash green and unlock, prompting the student to grab their tray and transfer their food into a container.

Campus Dining’s original plan was to hand out food directly, but the lockers improved efficiency and were contactless, Wright said.

Second-year English major and Ortega dining employee Alex Cadoff had doubts regarding the locker system. She said that staff transfer orders from the lockers to racks behind the front desk after 15 minutes.

If a student arrives after that 15-minute window, “they have to go up to the desk and tell them their order and their last three digits of the QR code,” according to Cadoff.

In her opinion, it would be faster if there were no lockers and everyone just went up to the desk for their orders.

According to Cadoff, other challenges include confusion around the ordering system, slowness in entering order numbers, poor organization and spotty Wi-Fi, the latter of which sometimes prevents the lockers from accepting QR codes.

Cadoff said that things have been slowly improving.

“The Wi-Fi is more consistent,” Cadoff said. “We know how to input the numbers. And we also know exactly where to put the orders on the rack so we could just find things more easily.”

For some students, one pain point with ordering from Ortega has been long wait times.

“Sometimes it can get pretty ridiculous,” Worona said. “Maybe hours or so.”

Wright partly attributed the delays to inexperience with operating an entirely new takeout program and the equipment that came with it. High demand was another factor, he said.

“When we first started, if somebody was trying to place an order, particularly during a time from 12 too 1 [p.m.] for lunch — yeah, there were some waits on that,” Wright continued. “But it feels like we have been able to increase efficiency and our output.”

Despite the limited menu, occasionally long wait times and the absent social experience of dining, Nguyen, Rodriguez, Worona and Cadoff all preferred that Ortega stay as a takeout location, mainly due to its convenience.

“As far as Ortega takeout goes, it’s an exciting new program for us in residential dining,” Wright said. “We’re happy to see that it is being met with positive feedback and that people are enjoying the service, and we want to continue to do the best job we can to provide that option for our customers.”