As a part of UC Santa Barbara’s return-to-campus COVID-19 safety plan, all students and campus employees are required to pass the Daily COVID-19 Screening Survey before entering any campus facility. However, as fall quarter progresses, some students are identifying issues with the system, including the self-reporting feature. 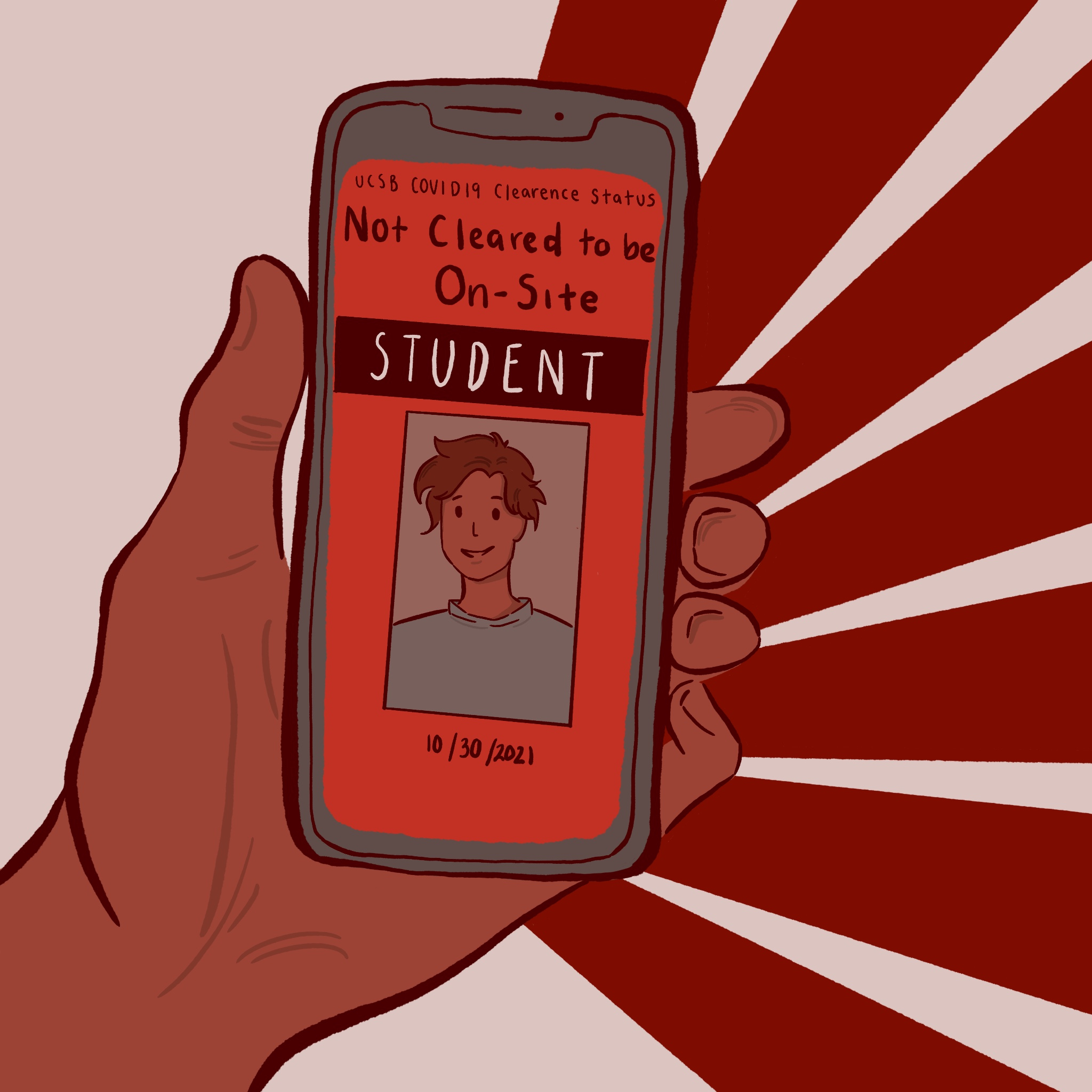 The daily survey asks about common sickness symptoms as well as exposure to COVID-19 through socializing or traveling. Jordan Bedell / Daily Nexus

The daily survey asks about common sickness symptoms including having a sore throat, headache, body aches, runny nose and/or cough as well as exposure to COVID-19 through socializing or traveling. If an individual confirms any symptoms or exposure, they receive a purple badge and are unable to enter campus facilities until they are cleared with a green badge, which can be obtained with a negative COVID-19 test. A red badge indicates a positive COVID-19 test and obligation to quarantine.

Fifth-year sociology major Ashley Forrest has been taking the tests every morning and said while she thought the system was a good idea at first, she changed her mind once it was implemented.

“I really don’t think that it offers any protection for students because it’s so easy for people to lie,” Forrest said. “No matter what, you’re going to have issues with self-reporting. There’s always going to be people who lie and say they’re fine so that they can attend class.”

Forrest also noted that none of her professors post their lectures online, so if she were to have a purple or red badge, she would miss content that can’t be made up.

“There’s always these backup or default safety net plans for just regularly missing a class, but there’s nothing specifically COVID related unless you actually catch it,” Forrest said.

While the Recreation Center and dining commons mandate badge checks, other buildings like the library only have reminders posted on their doors. Lecture and class badge checks aren’t required but instead recommended based on the professors’ and teaching assistants’ discretion.

History Professor John Lee oversees student badge checks before every one of his world history lectures, which has about 500 enrolled students.

“I started off on the first day having everyone show their badge as they came into class and that became a bit cumbersome because there was a traffic jam at the front,” Lee said. “So instead, they just show their badge to their TA when they arrive and then sit with them. That system has worked and people are totally dialed into it.”

Other professors, like economics professor Kelly Bedard, have opted for a less frequent, modified routine.

“Obviously, checking that people have passed their badge is a little challenging,” Bedard said. “I announced in the beginning that I would periodically ask people to show them. I usually send an email a few hours before and then I simply ask everybody to show their neighbors.”

While some professors perform their own badge checks, that is not the general consensus. A student who wishes to remain anonymous feels that the switch back to in-person instruction with little to no remote option has put them at an unnecessary risk for contracting COVID-19.

“Every class I attend, there are a handful of students who look extremely ill,” the student said. “They’re coughing with runny noses, and it’s obvious that they lied on their daily screening or probably didn’t even take the time to fill it out. None of my lectures are requiring badges so sick students have no problem attending class.”

On-campus COVID-19 rates remain low, with a positivity rate of .22% and eight cases reported out of over 3,500 administered tests the week of Oct. 17.

Forrest shared a similar sentiment as the anonymous student and said she has never had her badge checked at any campus facility.

However, Student Health has not received any negative comments about the badge system, according to UCSB spokesperson Andrea Estrada.

“The students need to answer their badge questions honestly,” Estrada said in a statement to the Nexus. “If they are affected by the fires, for example, that is okay to state on the badge system. We have a mechanism in place to clear the badge for these non-COVID related symptoms.”

Although students can clear their purple badge for symptoms unrelated to COVID-19, some are still worried about professors’ attendance policies.

While Estrada said that the badge screening has only had a total of five minutes of downtime since its launch, some students have also experienced technology issues with the badge system, including when the health portal and survey were temporarily inaccessible.

“The five-minute period was scheduled for and occurred during low peak usage times early in the morning,” Estrada said. “If the system were to be down for an extended period of time, students would use the On-demand Nintex screening tool.”

However, one student, who wishes to remain anonymous, described to the Nexus how they were unable to receive dinner from the dining commons due to the Student Health portal being unavailable. After checking with others waiting in line, the student said they were sure that the website was inaccessible.

“They said they couldn’t let me in without a green badge, so I said, ‘Can I just answer the questions for you?’” the student said. “They said no, and I couldn’t get the meal that I paid for. I understand the need for COVID protocols. I understand it’s a legal thing. But there needs to be alternatives for when technology fails us because that situation was a bit ridiculous.”